The following table provides an overview of the significant changes to the organization and features in this guide from the release the guide was first published to the current release. The table does not provide an exhaustive list of all changes made to the guide or the new features of the Cisco Cloud APIC.

A service graph is used to represent a set of Layer 4 to Layer 7 service devices inserted between two or more Endpoint Groups (EPGs). EPGs can represent your applications running within a cloud (e.g. Cloud EPG), or internet (e.g. Cloud External EPG), or in other sites (e.g. on-premises or remote cloud sites).

A service graph in conjunction with contracts (and filters) is used to specify communication between two EPGs. The cloud APIC automatically derives security rules, such as network security groups (NSG) and application security groups (ASG), and forwarding routes using User Defined Routing (UDR) based on the policy specified in Contract and Service Graph.

Each time the graph is deployed, Cisco ACI takes care of changing the network configuration to enable the forwarding in the new logical topology.

Multiple service graphs can be specified to represent different traffic flows or topologies. A service graph represents the network using the following elements:

Requirement for Separate VRFs in the Infra Hub

Prior to Release 5.0(2), the infra hub VNet was used to achieve transit routing functionality for inter-spoke communications within the site through CSRs in the hub, and to send VxLAN packets for EPG communication across sites.

There are situations where you might want to deploy a certain number of EPGs configured with shared services and layer 4 to layer 7 service graphs in a common hub that can be shared across spokes. In some situations, you might have multiple hub networks deployed separately (for example, for production, pre-production, and core services). You might want to deploy all of these hub networks in the same infra hub VNet (in the same infra cloud context profile), along with the existing cloud CSRs.

Thus, for these kind of requirements, you might need to split the hub VNet into multiple VRFs for network segmentation while keeping the security intact.

Beginning with Release 5.0(2), the overlay-2 VRF is now created in the infra tenant implicitly during the Cisco Cloud APIC bringup. In order to keep the network segmentation intact between the infra subnets used by the cloud site (for CSRs and network load balancers) and the user subnets deployed for shared services, different VRFs are used for infra subnets and user-deployed subnets:

Prior to Release 5.0(2), any given cloud context profile would be mapped to a cloud resource of a specific VNet. All the subnets and associated route tables of the VNet would be have a one-to-one mapping with a single VRF. Beginning with Release 5.0(2), the cloud context profile of the infra VNet can be mapped to multiple VRFs (the overlay-1 and overlay-2 VRFs in the infra VNet).

Redirect programming depends on the classification of the destination EPG (tag-based or subnet-based):

The following table describes how redirect is programmed in different scenarios.

In this use case, the consumer VNet (with consumer VMs) and the hub VNet are peered using VNet peering. A network load balancer is also deployed, fronting two firewalls for scaling. In this use case, the consumer VMs need access to the internet for a certain reason, such as patch updates. In the consumer VNet, the route table is modified to include a redirect for the internet in this case, and traffic is redirected to the NLB in front of firewalls in the hub VNet. Any traffic from this consumer that is part of the service graph that is going to the internet goes to the NLB as the next-hop. With VNet peering, traffic first goes to the NLB, then the NLB forwards the traffic to one of the firewalls in the back end. The firewalls also perform source network address translation (SNAT) when sending traffic to the internet. 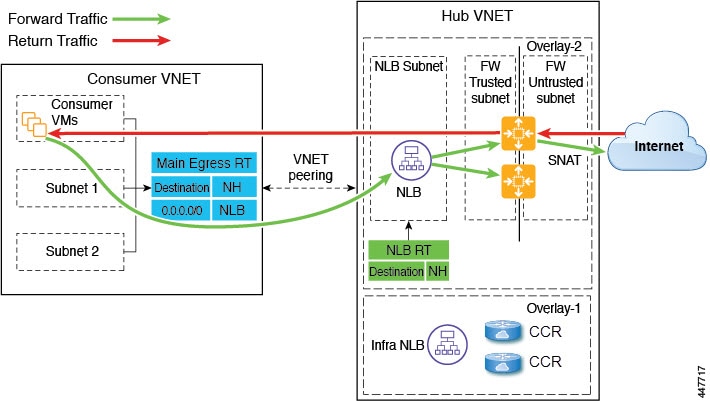 In this use case, traffic flows from spoke to spoke, through the hub firewall fronted by a hub NLB. Consumer endpoints are in the consumer VNet, and the provider VNet has VMs fronted by an internal NLB. The egress route table is modified in the consumer and provider VNets so that traffic is redirected to the firewall device fronted by the NLB. Redirect is applied in both directions in this use case. The NLB must have a dedicated subnet in this case.

Assume the consumer wants to send traffic to the provider VMs 30.20.10.0/24, which are local to it. In that case, traffic will get redirected to the region 1 hub NLB and firewall, and will then go to the provider.

Now assume the consumer wants to send traffic to the provider VMs 50.20.10.0/24. In this case, the traffic will get redirected to the region 2 hub NLB and firewall, because that firewall is local to the provider endpoint.

In this use case, traffic coming from the internet needs to go through the firewall before hitting the provider endpoints. Redirect is not used in this use case.

This use case is an example configuration with two VNets, with a consumer EPG and provider EPG in separate VNets.

Packet flow for both the directions is shown in the following figure: 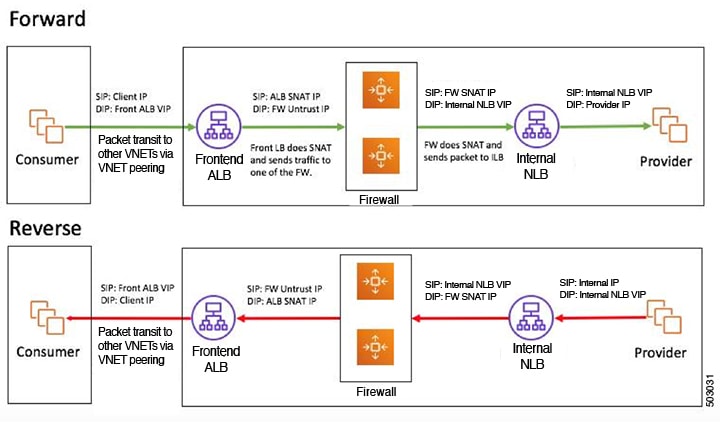 This use case is an example configuration with three VNets: a hub VNet, and a consumer EPG and provider EPG in two separate VNets. Packet flow for both the direction is shown in the following figure: 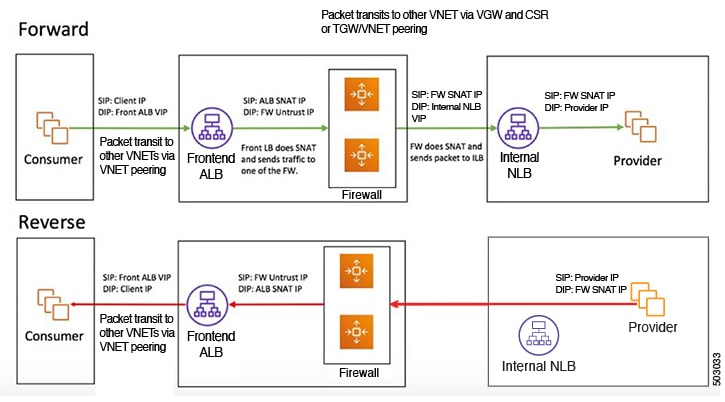 This release of Multi-Site Orchestrator does not support creating service graph devices, so you must first create them from the Cloud APIC UI. This section describes the GUI workflow to create the device; specific device configuration are described in the Cloud APIC Azure User Guide.

When configuring this use case, the following restrictions apply:

This section describes how to create a new schema for the Infra tenant. The process is the same as when creating a typical schema, with the exception that you can now choose the infra tenant.

Use the following procedure to associate the template with the appropriate sites.

When working with Infra tenant schemas, you cannot create new VRFs. This section describes how to import the overlay-2 VRF from the cloud site.

After you deploy your Cloud APIC, you will see overlay-1 and overlay-2 VRFs in the Cisco Cloud APIC. However, only the overlay-1 will be created in the Azure portal. This is because overlay-2 is a logical extension of overlay-1 and is used to hold additional CIDRs that you may need when deploying firewalls or load balancers in the Infra VNet.

This section describes how to create new or modify existing CIDRs for the overlay-2 VRF.

This section describes how to create a contract and filters that will be used for the traffic going through the service graphs. If you plan to allow all traffic, you can skip this section.

This section describes how to create two cloud EPGs in the infra tenant. You will then establish a contract between them and attach the contract to a service graph so the traffic between the EPGs flows through the service graph nodes. If you have imported the EPGs from your cloud site, you can skip this section.

After you created the cloud EPGs, you will need to add one or more endpoint selectors to it, as described in Adding Cloud EPG Endpoint Selectors.

On the Cloud APIC, a cloud EPG is a collection of endpoints that share the same security policy. Cloud EPGs can have endpoints in one or more subnets and are tied to a CIDR.

This section describes how to configure one or more devices for a service graph and deploy it to an Azure cloud site.

After you created the service graph, you will need to configure its site-local properties, as described in Configuring Service Graph's Site-Local Properties.

This section describes how to configure the service graph devices in an Azure cloud site.

This section describes how to associate a service graph with a contract.

This section describes how to add a listener to an ALB or NLB node of a service graph.

Listeners enable you to specify the ports and protocols that the load balancer accepts and forwards traffic on. All listeners require you to configure at least one rule (a default rule, which does not have a condition). Rules enable you to specify the action that the load balancer takes when a condition is met. Unlike application gateway, here a rule can only forward traffic to specific port of the backend pool. NLB should be in a separate subnet similar to ALB.