The following table provides an overview of the significant changes up to this current release. The table does not provide an exhaustive list of all changes or of the new features up to this release.

Prior to Release 5.0(2), the solution for inter-VNet communication in a Cisco Cloud APIC uses a hub-spoke overlay topology with IPsec tunnels between a pair of Cisco CSR routers in the infra VNet and a Virtual Network Gateways (VNG) in the user VNet. BGP runs over the IPsec tunnels as the routing protocol between the CSR routers and the VNG.

This implementation has several limitations:

VNet peering provides a low-latency, high-bandwidth connection useful in scenarios such as cross-region data replication and database failover. Since traffic is private and remains on the Microsoft backbone, if you have strict data policies, VNet peering becomes preferable because the public internet isn't involved. Since there's no gateway in the path, there are no extra hops, ensuring low-latency connections.

Azure VNet peering, similar to a Cisco CSR, is owned by the infra tenant. However, it’s shared with multiple user accounts.

Cisco APIC Release 5.0(2) is backward-compatible with previous methods of configuring communication between VNets.

Virtual network (VNet) peering enables seamless connection between two Azure Virtual Networks and is Microsoft's recommended way of forwarding data between two VNets. The virtual networks appear as one for connectivity purposes. The traffic between virtual machines uses the Microsoft backbone infrastructure. Like traffic between virtual machines in the same network, traffic is routed through Microsoft's private network only. Peerings are bidirectional.

Peering connections are non-transitive. For example, assume three VNets (A, B, and C), where A is bidirectionally peered with B, and B is with C. This does not mean A and C are peered with each other. 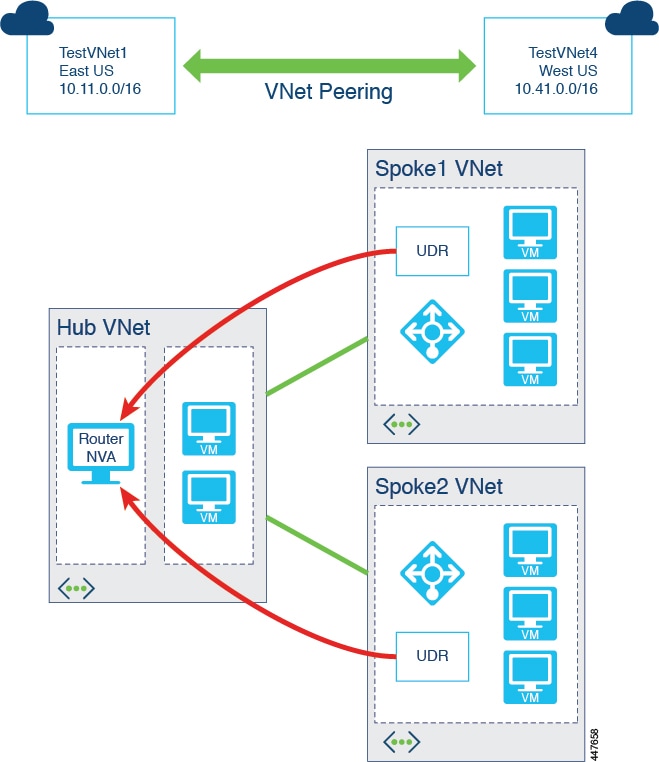 The benefits of using virtual network peering include:

For more information on VNet peering, see the article Virtual network peering in the Documentation section in the Azure website.

A CSR acts as the network virtual appliance (NVA) in the hub and routes the packets from one VNet to another VNet, and also forms the VXLAN tunnels toward the on-premises site. This kind of connection provides full bandwidth between Azure VNets as supported by your datacenter.

As mentioned previously, peering connections with Azure VNet peering are non-transitive. Since spokes are not peered with each other, Cisco Cloud APIC uses user-defined routes (UDRs) on each user VNet to forward traffic to other VNets.

UDRs are used to override Azure's default system routes, or to add additional routes. UDRs for the spoke are added to a subnet’s route table, with the next-hop pointing to the NLB of the NVA (CSR) in the hub.

Following are the guidelines and limitations for Azure VNet peering.

To configure Azure VNet peering, you set up the cloud site and then configure the necessary information in the cloud context profile.

Set Up the Cloud Site to Use Azure VNet Peering

Complete this task to set up the Azure cloud site to support VNet peering. This procedure assumes that you have not yet set up the cloud site.

This section explains how to create a cloud context profile using the Cisco Cloud APIC GUI for Azure VNET peering.

Set up the cloud site to use Azure VNET peering.

Complete this task to set up the Azure cloud site to support VNet peering. This procedure assumes that you have not yet set up the cloud site.

After you configure Azure VNet peering, you should verify that it is deployed correctly.

You must have set up the cloud site and configured the cloud context profile.