The Application Policy Infrastructure Controller (APIC) maintains a comprehensive, up-to-date run-time representation of the administrative and operational state of the ACI fabric system in a collection of managed objects (MOs). In this model, a fault is represented as a mutable, stateful, and persistent MO. When a specific condition occurs, such as a component failure or an alarm, the system creates a fault MO as a child object to the MO that is primarily associated with the fault. For a fault object class, the fault conditions are defined by the fault rules of the parent object class. An MO class can have multiple defined faults, each of which has a different fault code and a different fault rule. The fault code uniquely identifies a fault definition, and a fault rule uniquely identifies the fault conditions. For a given fault code, a parent MO instance can have only one fault MO.

In most cases, a fault MO is automatically created, escalated, de-escalated, and deleted by the system as specific conditions are detected. If the same condition is detected multiple times while the corresponding fault MO is active, the properties of the fault MO are updated, and no additional instances of the fault MO are created. A fault MO contains an “occur” property to record how many times a fault condition occurs. This property is useful for detecting fault flapping.

The creation of a fault MO can be triggered by internal processes such as finite state machine (FSM) transitions or detected component failures, or by conditions specified by various fault policies, some of which are user configurable. For example, you can set fault thresholds on statistical measurements such as health scores, data traffic, or temperatures.

A fault MO remains in the system after the fault condition is cleared until it is deleted from the system by one of the following circumstances:

A fault object is represented by one of the following two classes:

A record object contains a complete snapshot of the fault instance object and is logically organized as a flat list under a single container. The record object contains properties from the corresponding instance object (fault:Inst) such as severity (original, highest, and previous), acknowledgment, occurrence, and life cycle as well as inherited properties that provide a snapshot of the fault instance and the nature and time of its change. The record is meant to be queried using time-based filters or property filters for severity, affected DN, or other criteria.

The object creation can also trigger the export of record details to an external destination by syslog. To analyze how a fault object is created and deleted, inspect the fault records.

A fault raised by the system can transition through more than one severity during its life cycle. This table describes the possible fault severities in decreasing order of severity:

A fault raised by the system can be one of the types described in this table:

The system provides detailed information about each fault raised. This table describes the fault properties:

APIC fault MOs are stateful, and a fault raised by the APIC transitions through more than one state during its life cycle. In addition, the severity of a fault might change due to its persistence over time, so a change in the state may also cause a change in severity. Each change of state causes the creation of a fault record and, if external reporting is configured, can generate a syslog or other external report.

Only one instance of a given fault MO can exist on each parent MO. If the same fault occurs again while the fault MO is active, the APIC increments the number of occurrences.

The fault life cycle is shown in the following state diagram: 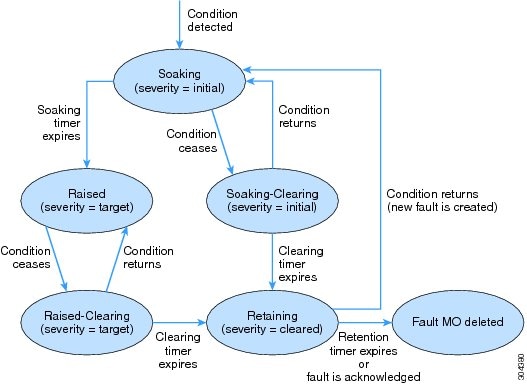 The characteristics of each state are as follows:

The soaking, clearing, and retention intervals are specified in the fault life cycle profile (fault:LcP) object.

The APIC GUI displays fault data in multiple views and locations, presenting the information in aggregate for assessing system health, and in detail for troubleshooting specific problems.

In ACI, a fault instance (either fault:Inst or fault:Delegate) is created under a specific MO that experiences the fault condition. Each component in the APIC UI, such as a tenant static path binding or a fabric node interface, represents an MO. For each of these MOs, the GUI provides a Faults tab that lists all active fault objects that have occurred on the MO itself or on its child MOs at any level.

In the table displayed by the Faults tab, you can view the properties and details of a specific active fault by double-clicking the fault row. To view the records (fault:Record objects) of previous faults of a component, click the History > Faults tab under the component.

With the large number of fabric nodes that a single APIC can manage, many faults may be generated for display. To simplify the viewing of so many faults, some components in the APIC UI provide two fault display modes:

When a component supports the group view, its default mode is group view. You can toggle between the modes by clicking the List View or Group View icon in the top right corner of the Faults tab toolbar.

The following GUI locations are examples of components supporting the group view:

In addition to the faults tables, the APIC GUI provides a Dashboard tab for some components, such as a tenant or a pod. The dashboard provides a summary view of the health score and fault counts for the MOs under the component. Separate panels are provided for Fault Counts By Domain, such as infra or tenant, and for Fault Counts By Type, such as configuration or environmental. Each panel provides the option to hide all acknowledged faults and to hide all delegated faults.

In each panel, the dashboard displays the aggregated fault count for each severity level. By double-clicking a fault row in the dashboard panel, you can switch to the Faults tab in the same work pane, with appropriate display filtering applied in the list view mode.

The following GUI locations are examples of component dashboards:

Logged faults are presented in several places in the GUI, filtered to show only those faults that are relevant to the current GUI context, such as a tenant or pod menu. Wherever a Faults tab appears in the GUI work pane, you can view the relevant entries from the fault log.

This procedure shows how to view tenant faults as an example.

To display a fault record for a specific entity, add the history keyword to the show faults command with the appropriate qualifiers, such as show faults history leaf 101 .

For details of these and other CLI commands, see the Cisco APIC NX-OS Style CLI Command Reference.

You can view faults using the API query methods to search for fault MOs, which can be of class fault:Inst or fault:Delegate. You can search for all instances or you can refine your search using query filters as described in the Cisco APIC REST API Configuration Guide.

This example shows how to query a physical interface for the faults associated to it:

This example shows how to request all the fault records associated to a multicast tree object:

The APIC can report faults and events asynchronously to external systems through the following mechanisms:

For information on configuring external reporting, see the following documents:

When a fault object is created, it contains information about the particular fault instance, such as the creation time, lifecycle state, number of occurrences, and the specific object to which it is attached. The instance object also contains a limited set of properties common to all instances of the fault class, such as the fault code and a brief cause of the problem. While this information is useful, you can find more information, such as an expanded explanation and recommended action, by accessing the reference documentation for the fault class. In the APIC GUI, you can double-click a fault in any fault table.

As described in Viewing Faults, there are several methods for inspecting the current faults. For this Cisco APIC Release 4.1(1) example, you can double-click a fault table row in the GUI for the Fault Code number F0104. The Fault Properties window below opens, displaying the instance properties of this fault class: 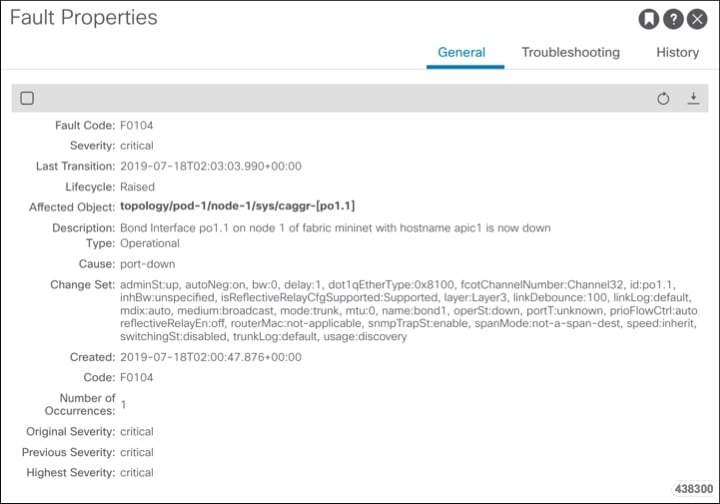 Click the help icon in the Fault Properties window to display the class properties of the fault: 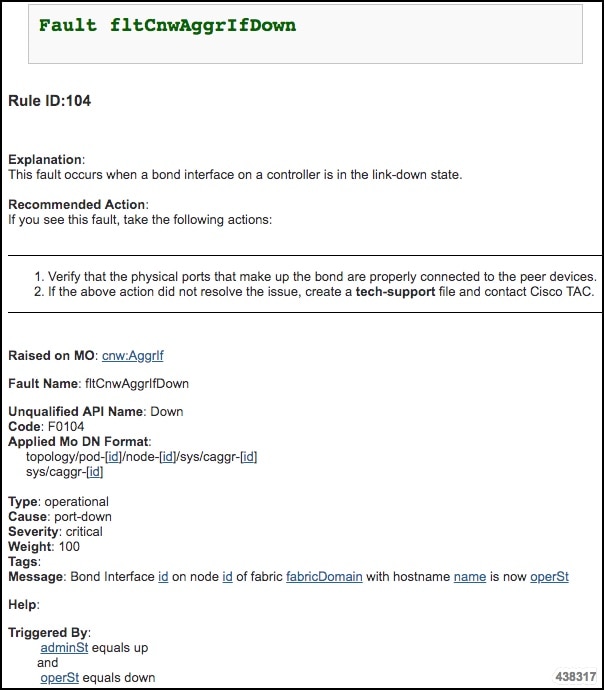 In earlier APIC releases, the class information might not be accessible in the same way. In that case, you can also find the fault class properties in the following sources:

During the operation of the ACI fabric, some faults may be generated due to conditions that are benign at the time. For example, a fault with fault code F0532 can be raised against a port which is currently down but associated with an endpoint group (EPG). This condition is expected and can be ignored if the port is currently unused but planned for use in the future. In a situation such as this, where you are fully aware of a fault-generating condition and wish to ignore it, you have the ability to suppress the fault notification completely (squelch) or to temporarily ignore it (acknowledge).

The following table shows some of the advantages and disadvantages of each method:

Ignoring an acknowledged fault prevents the fault from being included in the computation of the health score of the ACI fabric.

From any APIC GUI dashboard or faults tab, you can choose to hide acknowledged or delegated faults.

Changing the Severity or Squelching a Fault

Every APIC fault has a default severity. In some circumstances, a fault might be considered more or less severe than the default level. In some cases, you might want to ignore a particular fault and squelch (suppress) it from appearing in fault reports or status dashboards. APIC provides two locations from which you can change the severity of a fault type:

Changing Fault Severity or Squelching a Fault from the Faults Tab

In the Faults tab of an APIC GUI component, you can change the severity of a displayed fault or you can suppress (squelch) it altogether.

This change will be applied for all faults with this fault code that occur as a result of the displayed Affected Monitoring Policy.

When you squelch a fault code, a squelch policy is automatically created and added to a monitoring policy. If you want the faults to be raised and visible again, you must locate and delete that squelch policy. Depending on the monPolDn property of the parent MO, the auto-created fault squelch policy can be stored in the Fault Severity Assignment Policies under one of the following:

When you have located the squelch policy, follow the procedure in Changing Fault Severity or Squelching a Fault in the Monitoring Policy to delete the entry for the fault code or change the severity to a setting other than squelched.

Changing Fault Severity or Squelching a Fault in the Monitoring Policy

You can change the severity of a fault or suppress (squelch) it altogether by creating a fault severity assignment policy.

For example, the affected object class of the fault code F0321 is infra:WiNode.

This example procedure describes how to create a syslog monitoring source policy for reporting instances of a single fault code or all faults raised on a single object class.