One of the main challenges facing internal network security is providing visibility of data streams flowing through every part of a network. Because there is simply no central location where data can be gathered, visibility by its nature operates on a distributed paradigm. An effective solution must be able to collect data from the entire network, then translate and interpret the collected information in a way that maximizes threat detection.

Within this solution, visibility is achieved by implementing Cisco CTD, FirePower appliance, Splunk and NGA. Table 4-1 shows the different roles of these components that facilitate end-to-end visibility. 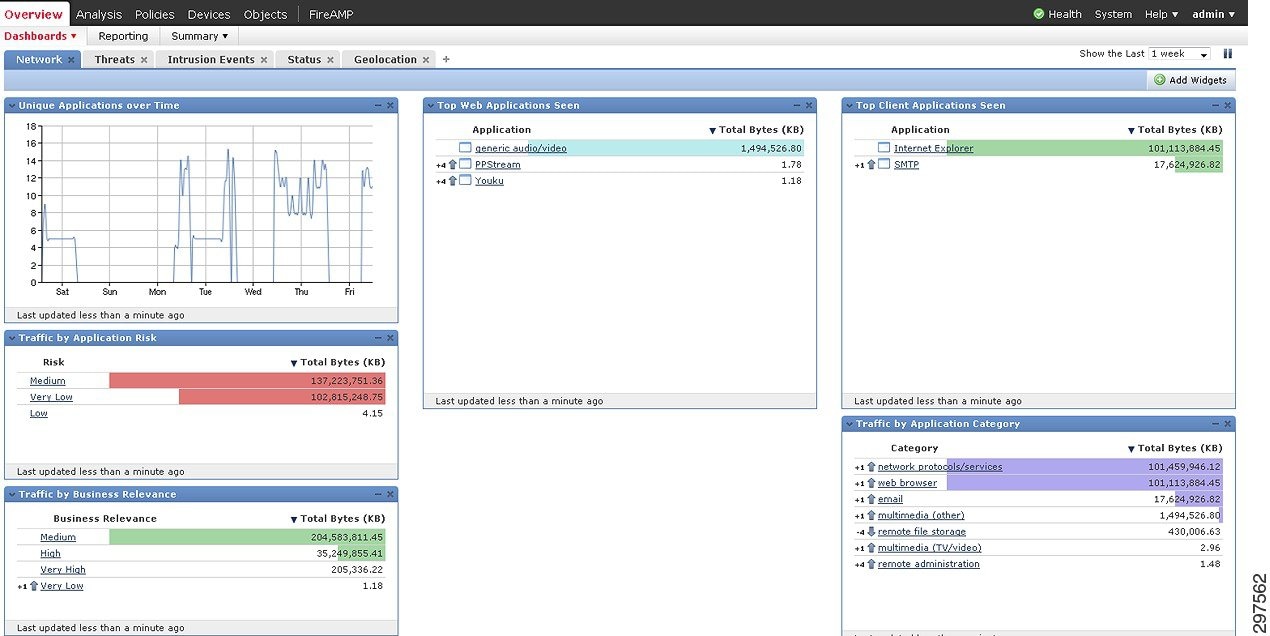 FirePOWER appliances can be configured to generate Syslog messages when detecting intrusion and malware events. These Syslog messages can be forwarded to Splunk log management and Cisco CTD. Cisco CTD will translate these syslog messages and integrate those events within its own database.

FirePOWER and Cisco CTD integration provides a more complete, unified view of the network. As shown in Figure 4-4, FirePOWER events are shown under external devices, within SMC’s dashboard, where intrusion events are populated and linked under a FirePOWER NGIPS appliance.

High traffic rates for Nexus 7000 switches can result in the generation of NetFlow records that can put high loads on the switch CPU. To reduce Nexus 7000 CPU loads, NGA offloads the processing needed to generate NetFlow records. As shown in Figure 4-5, Nexus 7000 traffic is spanned to NGA, which converts raw traffic flows to NetFlow records. The records are then forwarded to the NetFlow collector in Cisco CTD. 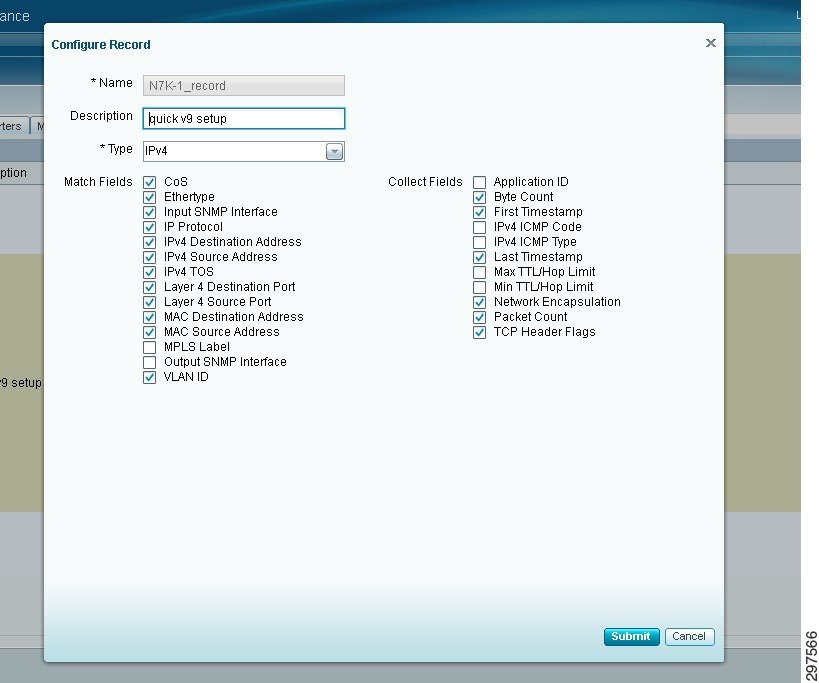 Configure MAC-address fields only if managed device settings are configured. Refer to http://www.cisco.com/c/en/us/td/docs/net_mgmt/netflow_generation/1-0/user/guide/NetFlow_Generation_UG/getstarted.html#wp1134717 for details.

As mentioned previously, unlike standard NetFlow, NSEL provides a stateful flow tracking mechanism that exports only those records that indicate significant events in an IP flow. NSEL events export data about flow status, and are triggered by the events that cause the state changes, rather than by activity timers as in standard NetFlow.

ASA (through NSEL) currently reports on the following event types:

The following highlights differences between NSEL and standard NetFlow:

In NSEL records, information about reported events is transported in fields inside NSEL records. Cisco CTD’s StealthWatch management dashboard interprets the fields and defines them as Flow Actions, as shown in Figure 4-6. If a flow is permitted through the firewall (indicated by flow-created and teardown events), the Flow Action field shows Permitted; if a flow is blocked by a firewall access control list (ACL), the Flow Action field shows Denied.

The context provided by the Flow Action fields is considered by behavioral algorithms in StealthWatch, so the Flow Denied action can provide a useful inspection point to run queries and to identify suspicious activity, such as scanning and distributed denial of service (DDOS) attacks.

From a security perspective Splunk supports a forensics approach to security event management. Looking for patterns in log data from Cisco and other security devices and viewing them in context of other data provides a comprehensive view of what's happening across an IT infrastructure. Using Splunk, the security team can harness their knowledge to model attack vectors and attack patterns based on conditions which Splunk can easily identify. As shown in this section, Splunk provides additional context to security events by connecting to external sources of data and pulling this data into generated reports or within a dashboard interface. Augmenting security data with information from other sources can help decrease response times.

Once a search across data sources is constructed, the user can save, run, and send the search results and graphical reports to others in PDF format on a scheduled basis or used to display results on a real-time dashboard. As shown below. network appliances and security devices export events and log information to Splunk. 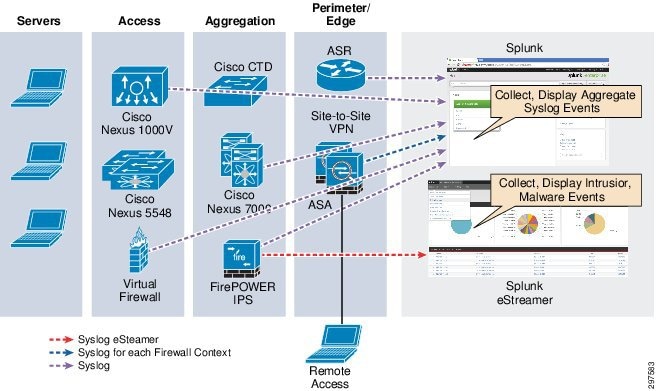 When deploying Splunk, note that: 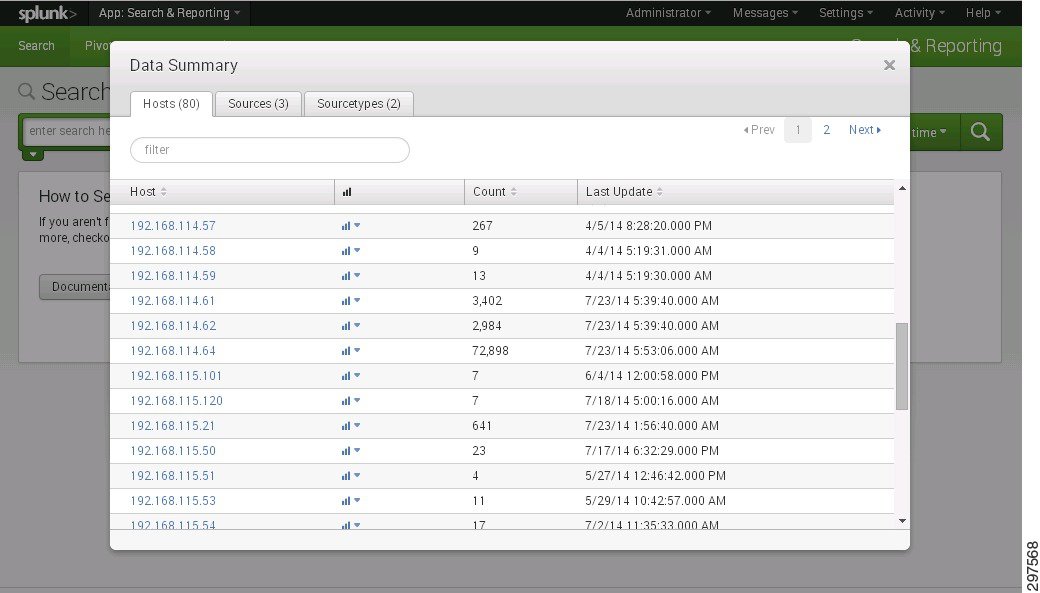 The eStreamer Splunk is a community* created application that can track intrusion events, file and malware events, flow logs, correlation, and security intelligence events, in a real-time dashboard, from FirePOWER appliances, as shown in Figure 4-9.

Estreamer is a community created tool that is leveraged in this solution. It is not an officially supported application by Cisco Systems, for more information on installation and the application itself refer to https://support.FirePOWER.com/downloads/1533/fetch. and http://apps.splunk.com/app/1629/.

When deploying eStreamer, note that:

The eStreamer dashboard enables security personnel to zoom in to particular Syslog message categories after possible anomalies or attacks are identified and obtain highly detailed event information from the logs. For example, as shown in Figure 4-10, you can zoom in to a policy summary in the dashboard and get a visual indication of policy-change events for different tenants over time. For example a spike in policy change events can indicate unauthorized access and tampering within the FirePOWER policy configuration.

Full descriptions of them feature-rich solution components are beyond the scope of this document.

Botnets comprise distributed software that collectively performs malicious actions as dictated by a master server that controls the botnet. Botnets are installed on numerous computers using infected emails, web downloads, and Trojan horses. A botnet consist of two components: one or more infected bots and one or more botnet controllers.

A bot is a host that was compromised using a software tool kit that enables remote hacker control over useful host resources. A botnet server is software that collects information from the bots under its control. Botnet servers use the computing power of the bots under its control to carry out malicious acts, such as distributed denial of service (DDOS) attacks, sending spam, and stealing sensitive data.

A botnet server periodically communicates with the infected bots through a unidirectional data flow-from bots to server. Usually, the server passively collects information from the bots without responding, and waits for an opportune moment to simultaneously activate the bots.

In general, botnets communicate from “inside” to “outside.” A beaconing host has an inside-to-outside communication flow that exceeds certain parameters, such a connection time. Cisco CTD generates an alert when it detects suspicious communication channels of that may be botnets.

By default, Cisco CTD trigger alarms when it detects beaconing hosts and changes the display coloring of the host from green to orange in the internal host-group navigation tree.

Data loss describes the loss of critical business data to unauthorized users. Data loss typically involves a data breach and back end transmission of sensitive data such as credit-card data, patient or financial information. Detecting data loss is imperative for implementing security controls for various compliance regimes such as PCI DSS and HIPAA. However, data loss incidents are unintentionally undetectable. 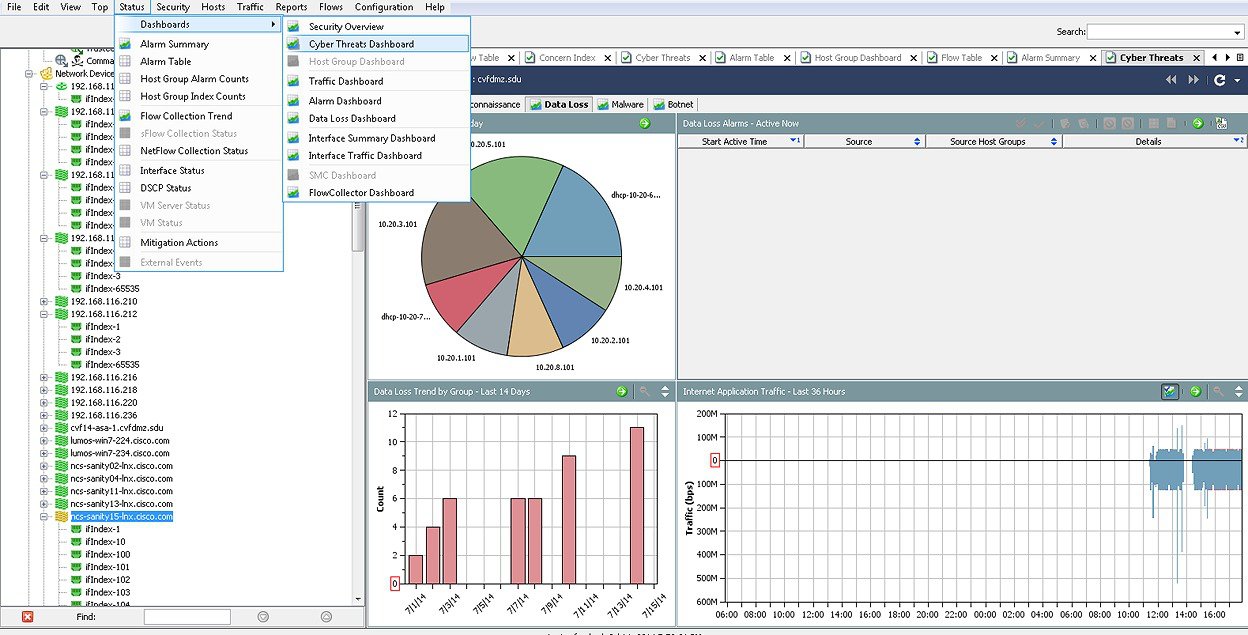 To effectively detect data loss traffic flows, Cisco CTD captures and analyzes historical data about network flows, and uses the data to create a baseline for the network. Baselining can be performed on host groups, which are often defined by IP address ranges and can have descriptions such as Tenant-x-Servers. Cisco CTD creates behavior profiles of all hosts and tracks several for flows to the hosts many days. Cisco CTD continually monitors flows and compares them to baseline parameters to determine whether data loss event has occurred.

After a host is identified as a suspect in a data loss event, the connection table in FirePOWER or the flow table in Cisco CTD can provide more information about the receiving node or other potential suspects in the internal hosts.

NSEL uses stateful records and indicates which host initiates a flow, it is easy to distinguish clients and servers. This characteristic makes NSEL an effective tool for detecting DDOS attacks.

ASA generates NSEL records for significant flow events (flow created, flow denied, and flow tear down). This information is sent to Cisco CTD in fields in the NSEL record. Cisco CTD’s StealthWatch management dashboard interprets the fields and defines them in a flow action field. StealthWatch then uses the flow action field context in its behavior algorithm to generate a concern index (CI) for each flow. During DDOS attacks, high CI values are generated along with an alarm indicating an attack. As shown in Figure 4-14, one can use the CI Dashboard in StealthWatch to characterize the incoming attack for a given host.

Because the byte count reported by NSEL represents data moving in both directions, it is difficult to separate how much data was uploaded or downloaded. Additionally, NSEL does not report packet counts, may hinder efforts to detect DDOS attacks using only NSEL data. Because NGA can intercepts north-south traffic, NGA exports traditional NetFlow to Cisco CTD for the same flows as NSEL. NGA can provide the missing timeout, packet, and byte data to complement ASA. This ensures complete flow visibility while maintaining unique context advantages delivered by NSEL.

The presence of network reconnaissance is one of the earliest indicators of an impending attack. The ability to detect reconnaissance early in the threat lifecycle is a critical part of a strong of a security framework. However, detecting reconnaissance inside the network perimeter is particularly challenging.

As in DDOS attacks, StealthWatch combines NSEL and NetFlow records from NGA to detect reconnaissance activities. For example, a device performing reconnaissance typically generates a large number of Address Resolution Protocol (ARP) requests but receives few responses. Other reconnaissance attacks generate illegal flag conditions such as SYN/FIN. In most cases, Cisco CTD can recognize these patterns to complement threat detection by appliances such as FirePOWER.

Cisco CTD’s StealthWatch generates an alarm for high CI for a given host, providing an indication of scanning as shown in Figure 4-15.

After determining the suspicious flow, by viewing the top active host for that flow, one may discern a high variance of destination IP addresses that uses “strange ports.” In addition, by viewing the “Peer vs. Peer” and “Peer vs Port” views in the flow table display, one can view host activities during a specified time period. The “Peer vs Peer” view generates a table that maps internal hosts to IP addresses they communicated with, and “Peer vs Port” view generates a table, mapping the nodes and the ports they communicated with. Hosts that communicate with a wide range of receivers or a wide range of ports can be considered suspicious, as shown in Figure 4-16.