The single logical node extends the integration of services in a campus network beyond what has been previously possible, without significant compromise. Integration of wireless, Firewall Services Module (FWSM), Intrusion Prevention System (IPS), and other service blades within the VSS allows for the adoption of an array of Service Ready Campus design capabilities. For example, VSS implementation allows for the applications of Internet-edge design (symmetric forwarding), data center interconnection (loop-less disaster recovery), and much more. Though this document only discusses the application of VSS in campus at the distribution layer, it is up to network designer to adapt the principles illustrated in this document to create new applications—and not just limit the use of VSS to the campus environment.

The key underlying capability of VSS is that it allows the clustering of two physical chassis together into a single logical entity. See Figure 1-1.

This virtualization of the two physical chassis into single logical switch fundamentally alters the design of campus topology. One of the most significant changes is that VSS enables the creation of a loop-free topology. In addition, VSS also incorporates many other Cisco innovations—such as Stateful Switch Over (SSO) and Multi-chassis EtherChannel (MEC)—that enable non-stop communication with increased bandwidth to substantially enhance application response time. Key business benefits of the VSS include the following:

In addition, the ability of the VSS to integrate services modules, bring the full realization of the Cisco campus fabric as central to the services-oriented campus architecture.

To better understand the application of the VSS to the campus network, it is important to adhere to existing Cisco architecture and design alternatives. The following section illustrates the scope and framework of Cisco campus design options and describes how these solve the problems of high availability, scalability, resiliency and flexibly. It also describes the inefficiency inherent in some design models.

The process of designing a campus architecture is challenged by new business requirements. The need for non-stop communication is becoming a basic starting point for most campus networks. The business case and factors influencing modern campus design are discussed in following design framework:

The use of hierarchical design principles provides the foundation for implementing campus networks that meet these requirements. The hierarchical design uses a building block approach that uses a high-speed routed core network layer to which multiple independent distribution blocks are attached. The distribution blocks comprise two layers of switches: the actual distribution nodes that act as aggregators for building/floors/section and the wiring closet access switches. See Figure 1-2. 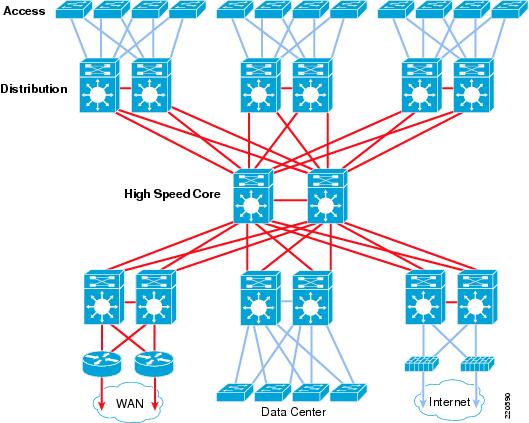 VSS at the Distribution Block

While these designs use the same basic physical topology and cabling plant, there are differences in where the Layer-2 and Layer-3 boundaries exist, how the network topology redundancy is implemented, and how load balancing works—along with a number of other key differences between each of the design options. Figure 1-3 depicts the existing design choices available. 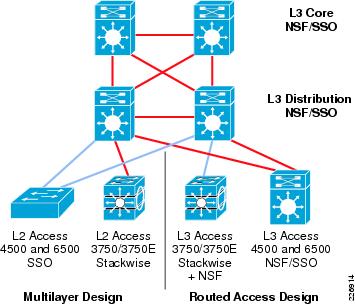 The multilayer design is the oldest and most prevalent design in customer networks while routed access is relatively new. The most common multilayer design consists of VLANs spanning multiple access-layer switches to provide flexibility for applications requiring Layer-2 adjacency (bridging non-routable protocols) and routing of common protocol, such as IPX and IP. This form of design suffers from a variety of problems, such as instability, inefficient resources usage, slow response time, and difficulty in managing end host behavior. See Figure 1-4. 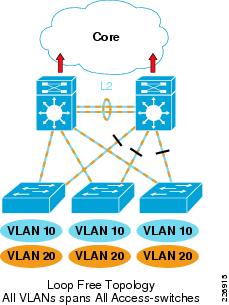 In the second type of multilayer design, VLANs do not span multiple closets. In other words VLAN = Subnet = Closet. This design forms the basis of the best-practice multilayer design in which confining VLANs to the closet eliminate any potential spanning tree loops. See Figure 1-5. However, this design does not allow for the spanning of VLANs. As an indirect consequence, most legacy networks have retained a looped spanning tree protocol (STP)-based topology—unless a network topology adoption was imposed by technology or business events that required more stability, such as implementation of voice over IP (VoIP). 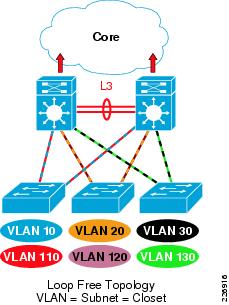 When VSS is used at the distribution block in a multilayer design, it brings the capability of spanning VLANs across multiple closets, but it does so without introducing loops. Figure 1-6 illustrates the physical and logical connectivity to the VSS pair. 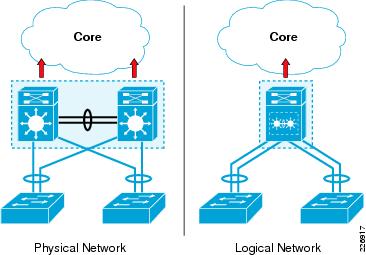 With VSS at the distribution block, both multilayer designs transform into one design option as shown in Figure 1-7 where the access layer is connected to single logical box through single logical connection. This topology allows the unprecedented option of allowing VLANs to span multiple closets in loop-free topology. 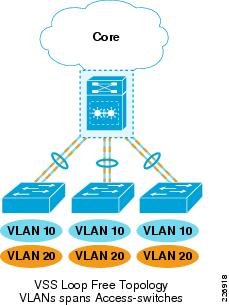 The application of VSS is wide ranging. VSS application is possible in all three tiers of the hierarchical campus—core, distribution, and access—as well as the services block in both multilayer and routed-access designs. However, the scope of this design guide is intended as an application of VSS at the distribution layer in the multilayer design. It also explores the interaction with the core in that capability. Many of the design choices and observations are applicable in using VSS in routed-access design because it is a Layer-3 end-to-end design, but the impact of VSS in multilayer is the most significant because VSS enables a loop-free topology along with the simplification of the control plane and high availability.

Application of VSS in a multilayer design can be used wherever the need of Layer-2 adjacency is necessary, not just for application but for flexibility and practical use of network resources. Some of the use cases are as follows:

Simplifying user connectivity by spanning VLANs per building or location