This chapter describes the VPN Acceleration Module 2+ (SA-VAM2+) and contains the following sections:

For additional information on these features, refer to the "IP Security and Encryption" chapter in the Security Configuration Guide and Security Command Reference publications.

IPSec—IPSec is an IP layer open standards framework that provides data confidentiality, data integrity, and data authentication between participating peers. IKE handles negotiation of protocols and algorithms based on local policy, and generates the encryption and authentication keys to be used by IPSec. IPSec protects one or more data flows between a pair of hosts, between a pair of security routers, or between a security router and a host.

IKE—Internet Key Exchange (IKE) is a hybrid security protocol that implements Oakley and Skeme key exchanges inside the Internet Security Association and Key Management Protocol (ISAKMP) framework. IKE can be used with IPSec and other protocols. IKE authenticates the IPSec peers, negotiates IPSec security associations, and establishes IPSec keys. IPSec can be configured with or without IKE.

CA—certification authority (CA) interoperability supports the IPSec standard, using Simple Certificate Enrollment Protocol (SCEP) and Certificate Enrollment Protocol (CEP). CEP permits Cisco IOS software devices and CAs to communicate to permit your Cisco IOS software device to obtain and use digital certificates from the CA. IPSec can be configured with or without CA. The CA must be properly configured to issue certificates. For more information, see the "Configuring Certification Authority Interoperability" chapter of the Security Configuration Guide at http://www.cisco.com/en/US/products/sw/iosswrel/products_ios_cisco_ios_software_releases.html

The component technologies implemented for IPSec include:

AES—The Advanced Encryption Standard, a next-generation symmetric encryption algorithm, used by the U.S. Government and organizations outside the U.S.

The SA-VAM2+ can be installed directly in the port adapter slots (see Figure 1-5) of the Cisco 7000VXR series routers and the Cisco 7301 router. Alternatively, you can install the SA-VAM2+ into a Port Adapter Jacket Card (product ID:C7200-JC-PA) that is inserted in the I/O controller slot of a Cisco 7200VXR router with an NPE-G1 or NPE-G2 processor, for additional bandwidth (see Figure 1-2).

Provides compression with IPSec at no extra overhead (LZS)

This section describes the SA-VAM2+ features, as listed in Table 1-1.

Table 1-2 lists the performance information for the SA-VAM2+.

The SA-VAM2+ has three LEDs, as shown in Figure 1-3. Table 1-3 lists the colors and functions of the LEDs.

The following conditions must be met before the enabled LED goes on:

The SA-VAM2+ is correctly connected to the backplane and receiving power.

The system bus recognizes the SA-VAM2+.

If either of these conditions is not met, or if the router initialization fails for other reasons, the enabled LED does not go on.

The Port Adapter Jacket Card has two LEDs, as shown in Figure 1-4. Table 1-3 lists the colors and functions of the LEDs.

There are no interfaces on the SA-VAM2+, so there are no cables, connectors, or pinouts.

The topics in this section include:

See Figure 1-5 for the input/output controller and ports for the Cisco 7200VXR routers. 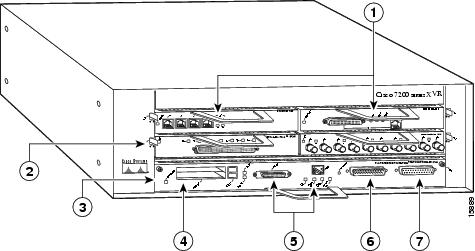 See Figure 1-6 for the port numbering for the Cisco 7301 router.

The Cisco 7301 router supports a single SA-VAM2+, or port adapter. 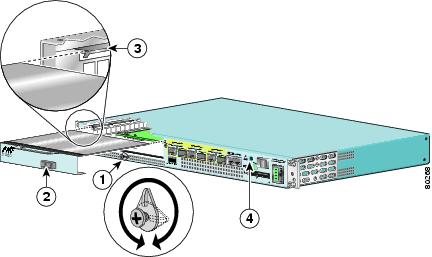