This document contains release information for the Cisco ASA Device Package software, Version 1.2(5.21) for ACI, and includes the following sections:

Cisco ASA Device Package Software supports only the version of APIC that it is shipped with.

Cisco TrustSec uses the Cisco Identity Services Engine as a centralized policy management platform to gather contextual data about who and what is accessing your network. You can then use this information to create security groups and to assign access rights based on role, function, location, and other criteria. For more information about Cisco TrustSec, see Cisco TrustSec “At-a-Glance”.

The following support for the Cisco TrustSec functionality is included in ASA Device Package 1.2(5):

The retry interval for SXP connections

In the example below, only IP addresses that belong to the Security Group “Engineering” are allowed to access EPG App, while denying all other Security Groups. 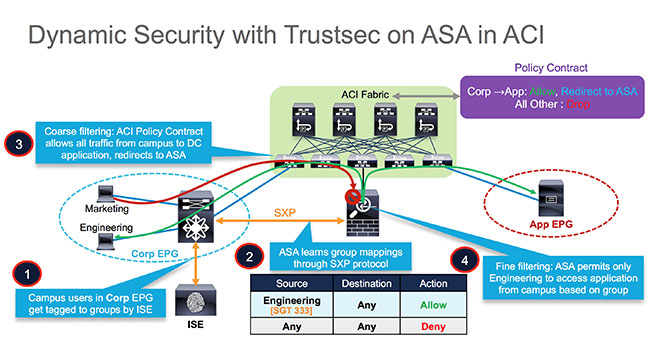 Cisco Application Centric Infrastructure (ACI) does not have native support of the Security-group eXchange Protocol (SXP). Therefore, in order to use TrustSec in ASA for ACI, you must have an SXP-capable switch.

Cisco ACI is a distributed, scalable, multi-tenant infrastructure with external end-point connectivity controlled and grouped through application-centric policies. SXP is the protocol used to propagate the IP-to-SGT mapping database across network devices that do not have SGT-capable hardware support. The Cisco Application Policy Infrastructure Controller (APIC) is a unified point of automation, management, monitoring, and programmability for the Cisco ACI.

To use TrustSec in ASA for ACI, changes to your network topology might be required. For details about the required topology and configuration examples, see the Cisco listing page shown below. This information will be available by March 14, 2016.

For more information about the features and benefits of Cisco TrustSec and Cisco ASA Device Package Software for ACI, see:

If you are running APIC 1.2(x) with ASA 9.3(1), which has a default SSL configuration, you will see the following error:

The workaround is to have ssl encryption aes128-sha1 configured on the ASA, or to upgrade the ASA to version 9.3(2) or later.

Symptom The Policy Manager crashes when the l3Out that is used for BGP peering for the service appliance has an incomplete configuration (CSCuw03425).

Conditions The l3Out used for BGP peering for the service appliance is missing l3extRsNodeL3OutAtt.

Workaround Make sure that the l3Out contains l3extRsNodeL3OutAtt. This problem will be fixed in a subsequent release.

The following shows the BGP XML example with l3extRsNodeL3OutAtt:

To upgrade, you do not need to remove the previous package if your APIC release has the fix for CSCuv4353. Otherwise, to upgrade from an older version to a newer, you need to remove the old version from APIC first, then install the new version.

If you have a Cisco.com login, you can obtain the ASA Device Package image from the following website:

Subscribe to What’s New in Cisco Product Documentation, which lists all new and revised Cisco technical documentation as an RSS feed and delivers content directly to your desktop using a reader application. The RSS feeds are a free service