The Cisco Fourth-Generation T1/E1 Voice and WAN Network Interface Modules (NIM) are inserted into the NIM slot on the router to provide T1, fractional T1, E1, and fractional E1 support for data and voice applications.

H.323 is an umbrella recommendation from the International Telecommunication Union (ITU) that defines the protocols to provide voice and video communication sessions on a packet network. The H.323 standard addresses call signaling and control, multimedia transport and control, and bandwidth control for point-to-point and multipoint sessions. For more information about H.323, see the H.323 Configuration Guide. For router configuration information, see the “Configuring H.323 Gateways” chapter of H.323 Configuration Guide.

Voice gateways provide voice security through SIP enhancements within the Cisco IOS Firewall. SIP inspect functionality (SIP packet inspection and detection of pin-hole openings) is provided, as well as protocol conformance and application security. The user is given more granular control on the policies and security checks applied to SIP traffic, and the capability to filter unwanted messages. For more information, see “Cisco IOS Firewall: SIP Enhancements: ALG and AIC.”

To configure encapsulation on the interface:

The PVDM4 is a hardware module that provides DSP resources that enable Cisco Integrated Services Routers to provide voice, video, conference, transcoding, and other collaboration services.

A DSP-farm is the collection of available DSP resources. DSP-farm profiles are created to allocate DSP-farm resources. A DSP-farm profile allows you to group DSP resources based on the service type. Under a DSP farm profile, you select the service type (conference, transcode, or Media Termination Point [MTP]), associate an application, and specify service-specific parameters such as codecs and maximum number of sessions. Applications associated with the profile, such as SCCP, can use the resources allocated under the profile. You can configure multiple profiles for the same service, each of which can register with one Cisco Unified Communications Manager group. The profile ID and service type uniquely identify a profile, allowing the profile to uniquely map to a Cisco Unified Communications Manager group that contains a single pool of Cisco Unified Communications Manager servers.

In an IP telephony network using Cisco Unified Communications Manager, the Conferencing and Transcoding for Voice Gateway Routers feature provides the conference-bridging service. Cisco Unified Communications Manager uses a DSP farm to mix voice streams from multiple participants into a single conference-call stream. The mixed stream is played to all conference attendees, minus the voice of the receiving attendee.

The Ad Hoc and Meet-Me conferencing features are supported (a conference can be either of these types):

For Cisco 4000 Series ISRs, the clocking mechanism on T1/E1 interfaces is architecturally different from the previous generations of ISRs. You must always have network-clock synchronization automatic global command configured which may not be default based on IOS-XE version. This ensures that the clocking is started on the modules.

There is no default clock source on Cisco 4000 Series ISR backplane. In Cisco 4000 Series ISRs, the NIM module can be its own clock domain if no network-clock synchronization participate command is configured for that NIM module. On a single NIM, all the T1/E1 lines with voice ports should share the same clock source on the remote side. You can recover the clock source from line: clock source line [primary | secondary] . If you wish to recover clocking from the line you must always select a primary input source with secondary input being optional. If you have more than two T1/E1 ports on the NIM the other ports can be left with the default configuration (clock source line ). To provide clocking to the line use the command clock source network . The command clock source internal is applicable to data T1/E1 and is not used for T1/E1 voice. Both data and voice can run on the same NIM module.

Cisco Unified Border Element (Cisco UBE) is a session border controller that provides the necessary services for interconnecting independent Unified Communications networks securely, flexibly, and reliably. Media packets can flow either through the gateway (thus hiding the networks from each other) or around the border element, if so configured. The Cisco UBE is typically used to connect enterprise networks to service provider SIP trunks, or to interconnect different nodes in an enterprise network where protocol or feature incompatibilities exist, or where extra secure demarcation between segments of the network is needed.

Cisco Unified Survivable Remote Site Telephony (SRST) enables Cisco routers to provide call-handling support for Cisco IP phones when they lose connection to Cisco Unified Communications Manager (CUCM) installations or when the WAN connection is down. In a centralized deployment, under normal conditions, Cisco IP phones are controlled by the Cisco Unified Communications Manager located at a central site like the headquarters of an enterprise. When the connection to CUCM breaks, for example as a result of a failure in the network, Unified SRST automatically detects the failure and auto-configures the router to provide backup call processing functionality.

During a WAN failure, the router allows all the phones to re-register to the remote site router in SRST mode, allowing all inbound and outbound dialing to be routed off to the PSTN (on a backup FXO, BRI or PRI connection).

IVR is a term that is used to describe systems that collect user input in response to recorded messages over telephone lines. User input can take the form of spoken words or, more commonly, dual tone multifrequency (DTMF) signaling.

For example, when a user makes a call with a debit card, an IVR application is used to prompt the caller to enter a specific type of information, such as a PIN. After playing the voice prompt, the IVR application collects the predetermined number of touch tones (digit collection), forwards the collected digits to a server for storage and retrieval, and then places the call to the destination phone or system. Call records can be kept and a variety of accounting functions can be performed.

The IVR application (or script) is a voice application designed to handle calls on a voice gateway, which is the router equipped with voice features and capabilities.

The prompts used in an IVR script can be either static or dynamic:

For example, dynamic prompts are used to inform the caller of how much time is left in their debit ccount, such as:

“You have 15 minutes and 32 seconds of call time left in your account.”

TCL is an interpreted scripting language. Because TCL is an interpreted language, scripts written in TCL do not have to be compiled before they are executed. TCL provides a fundamental command set, which allows for standard functions such as flow control (if, then, else) and variable management. By design, this command set can be expanded by adding extensions to the language to perform specific operations.

Cisco created a set of extensions, called TCL IVR commands, that allows users to create IVR scripts using TCL. Unlike other TCL scripts, which are invoked from a shell, TCL IVR scripts are invoked when a call comes into the gateway.

The T1/E1 network interface module will not be operational until a card type is configured.

The following example shows the running configuration of the router with the Fourth-Generation T1/E1 NIM installed and configured for data.

The following example shows the running configuration of the router with the Fourth-Generation T1/E1 NIM installed and configured for voice support.

Use the following commands to check the status of the modules.

This image is not available in preview/cisco.com 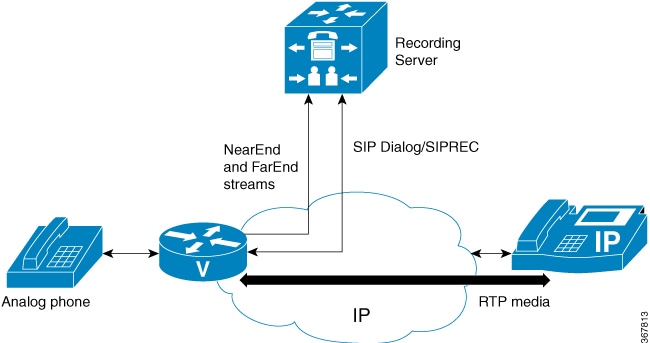 Cisco 4000 Series platform supports Smart License for Unified Communication (UC) functionality. As the Media Recording feature supports a feature based license, in addition to the existing UC license, you must register to the Smart Licensing portal. Once the feature is registered and the associated license request is granted by the license server, the license is maintained on the gateway. The granted licenses then can be assigned on a per call basis to a analog call that have media recording feature.

The media recording session is initiated when a pre-configured set of rules is approved on the telephony leg. These rules include recording license availability and the recording feature configuration.

There are three different basic TDM gateway usecases that can be considered for media recording:

Time-division Multiplexing (TDM) media recording is not supported for the following calls:

This section describes the steps to configure media recording on Cisco 4000 Series ISRs.

To configure the media recording:

To enable the voice-port recording license, use the media-recording licenses command in the voice service mode. After you enter the configuration, a static license request is raised and a license request is sent to the server. The system looks for the license. If the license is granted, the CLI is execute, otherwise, the CLI is rejected or updated.

This feature is enabled through Cisco smart software license. The feature license PIDs are:

The following example shows how to enable the media-recording license: