The primary purpose of MetroPlanner is to assist sales engineers (SEs) in the design and validation of optical networking deployment using Cisco Optical Networking System (ONS) 15454 Multi-Service Transport Platforms (MSTP). MetroPlanner generates a shelf view of all the sites deployed in the optical network and provides a complete bill of materials (BOM) for the network.

This chapter describes how you use MetroPlanner to design, analyze, and optimize new or existing Cisco optical networks.

MetroPlanner 2.5 provides a simple tool set for designing optical networks with Cisco ONS 15454 MSTP products. By entering specific configurations, or only the barest essentials of site distances, you can make the correct choices for the type of network you wish to build. Several solutions can correspond to one type of equipment or platform. The MetroPlanner 2.5 graphical user interface (GUI) models general specifications and produces detailed BOMs to provision optimized networks.

Designing optical networks requires the verification of multiple constraints such as optical budget limitations and platform architectural constraints. Both simple and complex optical network designs are automatically modelled and tested by MetroPlanner 2.5.

The MetroPlanner 2.5 GUI allows SEs to design and document network designs and validate optical networking implementations on the Cisco ONS 15454 MSTP platform. Using MetroPlanner 2.5, you can perform the following tasks:

Using the MetroPlanner-generated BOM, you can place the order directly on Cisco.com.

The MetroPlanner 2.5 GUI allows the SE to do the following:

Create a node at a site

Define the type of protection scheme

The total network cost is the cost of the equipment for all of the sites in the designed network. MetroPlanner 2.5 searches for the best solution to a designed network using an optimization algorithm.

A network design must meet the optical budget and receiver overload criteria to operate efficiently. The analysis of optical budget and receiver overload evaluates the strength of the signal traversing the ring. If a design solution satisfies the constraints, it is a valid design. The MetroPlanner 2.5 optimization algorithms generate multiple solutions and verify the constraints against those solutions. If the constraints are satisfied, the solution with the lowest cost-to-utilization ratio is selected as the optimal solution.

If the network design solution fails to satisfy all the constraints, MetroPlanner 2.5 makes adjustments to parameters such as signal attenuation and amplification. Amplification is achieved either by using an erbium-doped fiber amplifier (EDFA). Attenuation is achieved by using variable optical attenuator (VOA) modules integrated into the platform. MetroPlanner 2.5 corrects the optical budget using an algorithm that includes automatic placement of EDFAs and VOA regulation.

For each internodal demand, MetroPlanner 2.5 performs an optical budget and receiver overload analysis and the displays the results in form of various reports in the GUI. If the network design algorithms are not able to provide a solution, then the user can modify the input data (for example, by relaxing some user constraints) and run the analysis again.

To generate a network design, the SE enters the following parameters:

The number of network sites

The type of equipment used at each site

The distance separating the sites

The type of fiber connecting the sites

Service demands, including the service type, the protection type, and the number of channels between nodes

Once the network parameters have been entered, the MetroPlanner finds the best routing, defines the required add/drop filters, and places optical amplifiers and dispersion compensation units (DCUs) to fit the user traffic demands at the minimum cost. Optimization is performed to meet the boundary conditions. The optimization includes attenuation and amplification.

Finally, MetroPlanner 2.5 generates the BOM, which includes the product code, the quantity, and pricing information. In addition, it creates other reports, such as a shelf-level view of the configuration, which can be printed. This helps the SE understand how the shelf is built and helps to avoid confusion and errors during the actual deployment. Within the BOM is the total network cost, which allows a quick comparison of various design options.

Any to Any ring

MetroPlanner 2.5 can support any subset of the following services:

The flowchart in Figure 1-1 shows the following stages used to create a complete network design:

Place sites in the network. A site represents a potential location for placing equipment. This can be accomplished by adding one site at a time or by using the Add Network tool to add multiple sites at once.

Place fiber spans between the sites. A span represents a pair of fibers.

Specify service demands between sites as required. For Fixed adn P-Ring demands, only one line will be drawn to represent all services between a particular service source and service destination site.

In the event that the user would like to force automatic tool choices, there are options to adjust the design and repeat the analysis until the desired configuration is achieved.

Traffic in MetroPlanner 2.5 is defined as an optical path for each pair of nodes requiring a service demand. An optical path (connectivity) is defined as the sum of a wavelength between the two nodes. This task is performed by creating a network design that minimizes the overall cost.

The following list gives definitions for some basic traffic items:

Connectivity—An undefined number of channels than can vary from 0 to 32 between a pair of nodes. The connectivity takes the meaningful parameter values of the circuit demand to which the connectivity belongs.

Demand—A set of services of the same type. It defines the set of parameters common to all the circuits or connectivity that are part of this demand. The list of relevant attributes are:

Number of circuit in present

Number of circuit in forecast

Traffic Group: Groups all the demands between same set of nodes. The following traffic groups are supported:

ROADM—All nodes in the subset can be connected. The way each node can be connected with the others depends on the way you define the Traffic Type parameter. The number of channels can vary from 0 to 32.

Meshed—Each node defined in the set is connected to each other. This is the most common traffic type.

Hub—The user-defined hub node is connected to each of the other nodes defined in the subset.

P-Ring—Contains all the demands to support traffic topologies similar to bidirectional line switch ring (BLSR) or multiplex section-shared protection ring (MS-SPRing). Each demand that is part of the P-Ring is defined between a pair of nodes in the list of the added/dropped nodes where BLSR-like (or MS-SPRing-like) traffic must be opened. The number of circuits is the same for each demand, and must be user-specified (from 1 to 32).

Fixed—Restricts the set of nodes at 2 sites. The number of circuits of each demand must be user-specified (from 1 to 32).

An any-to-any traffic demand is defined among a subset of nodes (minimum of two, maximum of every node in the network). An any-to-any traffic demand allows each node belonging to the subset to establish one or more circuits (an optical path carrying a service) with the other nodes. These circutis have the same protection types and services to be carried. The actual connection capacity between each pair of nodes belonging to the subset is dependant on the specific traffic pattern present in the overall network, not just within the selected subset.

MetroPlanner 2.5 represents all the user-defined traffic services as an explorer tree view within the Traffic Tree window. Fixed, P-Ring, and ROADM traffic groups are shown on the tree view (Figure 1-1). 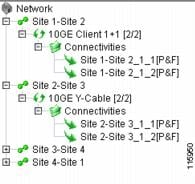 The tree view appears gray until you analyze the network. Refer to the "2.4  Analyzing the Network" section on page 2-31. You cannot access the right-click menu until the network is analyzed.

Each fixed traffic group is represented by a folder labeled with a concatenation of the source and destination site names. All the fixed services between these nodes are represented in this traffic group (Figure 1-2).

Each fixed demand defined between these nodes is represented by an item in this traffic group. The fixed demand is labeled using the following information:

For ROADM network topologies, fixed traffic can also include traffic demand with optical-bypass sites. No additional patch cords are required for express or optical bypass channels in ROADM sites.

Protected ring (P-ring) traffics groups are represented in the tree by a folder. This folder is labeled by using a concatenation of the P-Ring substring and a progressive number automatically assigned by MetroPlanner 2.5. Figure 1-3 shows an example of a P-ring traffic group. 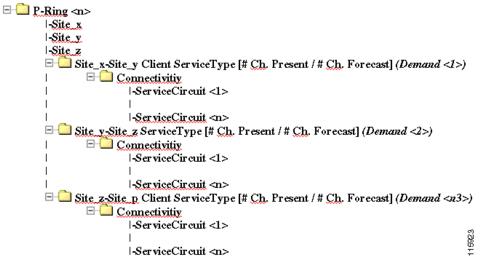 The list of add/drop sites (as defined in the P-Ring request) is shown in the P-Ring Traffic Group folder. All the demands between each node pair are represented under this traffic group. Each demand (generated by the P-Ring wizard) is labeled concatenating the following information:

SiteA-SiteB (source and destination node labels for this demand)

Each service circuit is labeled as described in the "Fixed Traffic Groups" section.

For ROADM network topologies, P-ring traffic can also include traffic demand with optical-bypass sites. No additional patch cords are required for express or optical bypass channels in ROADM sites.

One item for each site that is part of this ROADM group. You can only define one set of nodes for each ROADM group.

One folder for each defined ROADM demand. You can define more demands for the same ROADM group for the same set of nodes.

Figure 1-4 shows an example of an ROADM traffic group.

Hub (Hub Node)—Defines connectivity between the defined hub node and every other node in the traffic group. You must specify the selected hub node among the list in the group.

Routing Strategy—defines the maximum number of allowed connectivities, and the way the connectivities are routed by MetroPlanner 2.5. The following options are supported:

Unprotected Subnet—Each node pair in the traffic group is connected using one connectivity. You can manually force connectivities on only one branch of the ring. For unprotected subnets, you must manually select one starting node of the branch and the direction the ring must be traversed to define the subnet, starting from the initial site. Branch direction is specified defining the outgoing side referred to the starting node.This routing strategy option allows you to exclude some critical paths and (with ROADM traffic groups containing 2 sites) to force each ROADM connectivity clockwise or counterclockwise.

List of selected Client Service Types—The list of client service types to be supported for this demand is represent by a set of item under the related ROADM Demand folder. You can simultaneously request more then one Client Service Type for each demand (Any Client).

To avoid duplication in the tree view while using the Protected routing strategy: