This chapter describes how to configure resilient packet ring (RPR) and Dual RPR Interconnect (DRPRI) for the ML-Series card.

When an ML-Series card is configured with RPR and made part of a shared packet ring (SPR), the ML-Series card assumes it is part of a ring. If a packet is not destined for devices attached to the specific ML-Series, the ML-Series card simply continues to forward this transit traffic along the SONET/SDH circuit, relying on the circular path of the ring architecture to guarantee that the packet will eventually arrive at the destination. This eliminates the need to queue and forward the packet flowing through the nondestination ML-Series card. From a Layer 2 or Layer 3 perspective, the entire RPR looks like one shared network segment.

The RPR protocol, using the transmitted packet's header information, allows the interfaces to quickly determine the operation that needs to be applied to the packet. An ML-Series card configured with RPR is part of the ring and has three basic packet-handling operations: bridge, pass-through, and strip. Figure 17-1 illustrates these operations. Bridging connects and passes packets between the Ethernet ports on the ML-Series and the packet-over-SONET/SDH (POS) circuit circling the ring. Pass-through lets the packets continue through the ML-Series card and along the ring, and stripping takes the packet off the ring and discards it. Because STP or RSTP is not in effect between nodes when RPR is configured, the transmitting RPR port strips its own packets after they return from circling the ring. A hash algorithm is used to determine the direction of the packet around the RPR. 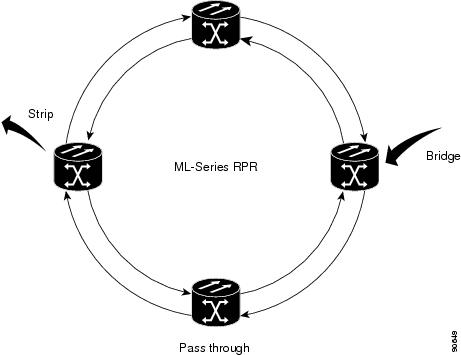 RPR initiates ring wraps in the event of a fiber cut, node failure, node restoration, new node insertion, or other traffic problems. This protection mechanism redirects traffic to the original destination by sending it in the opposite direction around the ring after a link state change or after receiving SONET/SDH path level alarms. Ring wrapping on the ML-Series card allows convergence times of less than 50 ms. RPR convergence times are comparable to SONET/SDH and much faster than STP or RSTP. 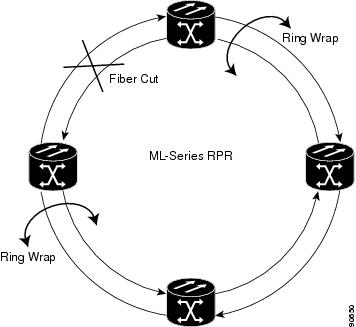 RPR also enhances VLAN support relative to STP and RSTP. In an STP and RSTP, a new VLAN must configured on all POS interfaces on the ring. In RPR, the VLAN must only be added to the configuration of those interfaces that bridge or strip packets for that VLAN. The ML-Series card still has a 255 architectural maximum limit of VLAN/bridge-group per ML-Series card. But because the ML-Series card only needs to maintain the MAC address of directly connected devices per card, a greater number of connected devices are allowed on an RPR network basis.

A best practice is to configure SONET/SDH circuits in an east-to-west or west-to-east configuration, from Port 0 (east) to Port 1 (west) or Port 1 (east) to Port 0 (west), around the SONET/SDH ring. Do not configure Port 0 to Port 0 or Port 1 to Port 1. The east-to-west or west-to-east setup is required for the Cisco Transport Manager (CTM) network management software to recognize the ML-Series configuration as an SPR.

Do not use native VLANs for carrying traffic with RPR.

Each of the ML-Series card's two POS ports must be assigned to the SPR interface. To assign the POS interfaces on the ML-Series to the SPR, perform the following procedure, beginning in global configuration mode:

Figure 17-3 shows an example of an RPR Cisco IOS configuration. The associated code is provided in Examples 17-1, 17-2, and 17-3. The configuration assumes that ML-Series card POS ports are already linked by point-to-point SONET/SDH circuits configured through CTC. 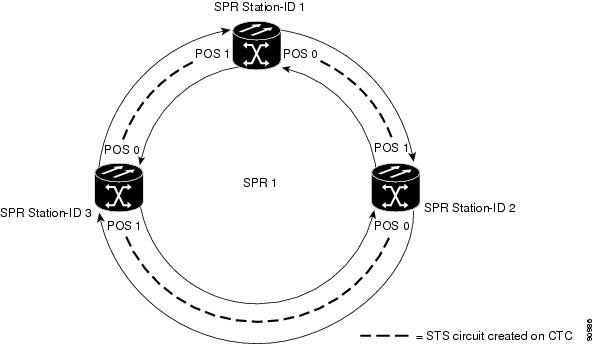 After RPR is configured, you can monitor its status using the show interface spr or show run interface spr command (Example 17-4).

Link fault propagation (LFP), also known as link pass through, decreases convergence times in networks where routers interconnect through ML-Series card RPR. It quickly relays link faults from a master Gigabit Ethernet link to a remote slave link, either Gigabit Ethernet or FastEthernet. LFP greatly improves the time it takes for a router connected to the slave link to fail over to an alternate path. Under normal protection schemes, convergence might take as long as forty seconds. Using LFP, the slave interface reflects the state of the master interface in well under a second. This feature is often used to enable a link failure at a far-end hub site to trigger a link down state at a near-end access site. Figure 17-4 illustrates LFP. 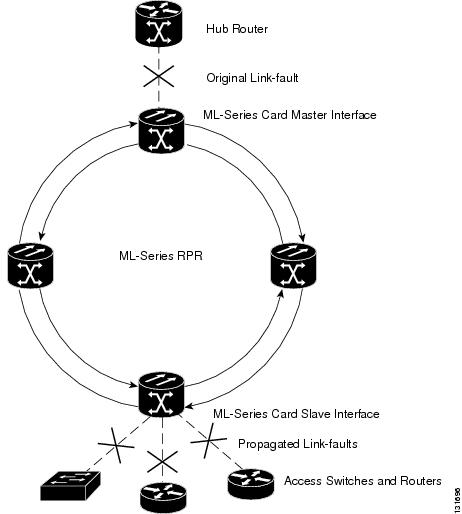 LFP updates are done through a CDP packet extension. The update is sent periodically and immediately after the master interface goes into link-down. LFP updates are sent separately from normal CDP packets, and the two types do not interact. Configuring or disabling CDP on the interface has no effect on LFP updates.

A link-down fault is also forced onto the slave link if the connection from the master to the slave fails. Any of the following can cause a loss of conecction:

Shutdown or failure on both of the RPR paths between master and slave.

Disabling LFP on the master interface.

Link faults only propagate from master to slave. Normal slave link faults are not propagated. RPR wrapping and unwrapping has no effect on LFP.

Propagation delay between master link-down and slave link-down is 50 ms plus the carrier-delay time on the slave interface.

Propagation delay between master link-up and slave-link up has an additional built-in delay at the master interface to prevent interface flapping. Link-up propagation takes approximately 50-200 ms plus the carrier-delay time on the slave interface.

Propagation delay from when the master to slave link fails until slave link-down is approximately 600 ms plus the carrier-delay time on the slave interface.

Figure 17-4 illustrates an example of RPR configured with LFP. The process of configuring LFP consists of the following tasks:

To enable and configure the LFP slave link, perform the following procedure on an ML-Series card in the RPR other than the ML-Series card configured for the master link. Begin in global configuration mode:

LFP has these configuration requirement:

A link-fault master and slave should not be configured on the same card.

The ML-Series card must be running the Enhanced microcode image.

All ML-Series cards in the RPR must be running software release 5.0 and later.

Only one link-fault master is allowed per RPR.

Gigabit Ethernet and FastEthernet interfaces are both eligible to become link-fault slaves.

There is no configuration limit on link-fault slaves on an RPR.

The Cisco IOS status of link-down interface is shown as protocol down/link down. Neither the show controller or show interface command reveals the difference between a local loss on the link and an LFP loss.

Cisco ML-Series RPR includes a mechanism to interconnect rings for protection from node failure. The bridge-group protocol, DRPRI, provides two parallel connections of the rings linked by a special instance of RSTP. One connection is the active node and the other is the standby node. During a failure of the active node, link, or card, a proprietary algorithm detects the failure and causes a switchover to the standby node. DRPRI provides a recovery time of less than 200 ms for Layer 2 bridged traffic, when the ML-Series employs the enhanced microcode image. When the ML-Series employs the base or Multiprotocol Label Switching (MPLS) microcode images, the recovery time for Layer 2 bridged traffic is up to 12 seconds. With any microcode image the recovery time for Layer 3 unicast and multicast traffic also depends on the convergence time of the routing protocol implemented. 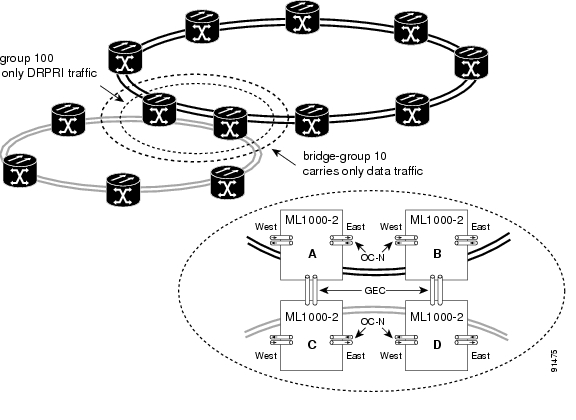 Each paired set of ML1000-2 cards must have the same SPR station ID.

The bridge-group must be configured on SPR subinterfaces.

A manual shutdown on subinterfaces or the GEC interface included in the DRPRI bridge-group must be issued on the interfaces at both ends of the GEC or Ethernet connection between the rings.

A DRPRI node can only be used for interconnecting two RPRs. The front ports of the cards should not be used to carry other traffic.

Non-DRPRI bridge-groups carrying traffic between rings should not have STP or RSTP configured.

Non-DRPRI bridge-groups carrying traffic between rings must be configured on each of the four ML-Series cards.

After DRPRI is configured, you can monitor its status using the show bridge verbose command (Example 17-10).