SNMP is an application-layer communication protocol that allows ONS 15454 network devices to exchange management information among these systems and with other devices outside the network. Through SNMP, network administrators can manage network performance, find and solve network problems, and plan network growth.

The Cisco ONS 15454 supports SNMP Version 1 (SNMPv1) and SNMP Version 2c (SNMPv2c). Both of these versions share many features, but SNMPv2c includes additional protocol operations and 64-bit performance monitoring support. This chapter describes both versions and gives SNMP configuration parameters for the ONS 15454.

The CERENT-MSDWDM-MIB.mib and CERENT-FC-MIB.mib in the CiscoV2 directory support 64-bit performance monitoring counters. However, the SNMPv1 MIB in the CiscoV1 directory does not contain 64-bit performance monitoring counters, but supports the lower and higher word values of the corresponding 64-bit counter. The other MIB files in the CiscoV1 and CiscoV2 directories are identical in content and differ only in format.

Figure 5-1 illustrates the basic layout idea of an SNMP-managed network. 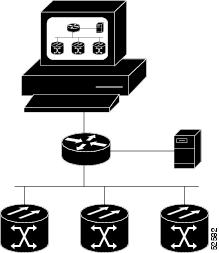 In general terms, an SNMP-managed network consists of a management system, agents, and managed devices. 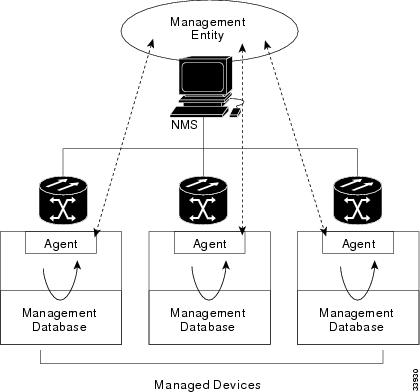 An agent (such as SNMP) residing on each managed device translates local management information data, such as performance information or event and error information caught in software traps, into a readable form for the management system. Figure 5-3 illustrates SNMP agent get-requests that transport data to the network management software.

The SNMP agent captures data from management information bases, or MIBs, which are device parameter and network data repositories, or from error or change traps.

A managed element—such as a router, access server, switch, bridge, hub, computer host, or network element (such as an ONS 15454)—is accessed through the SNMP agent. Managed devices collect and store management information, making it available via SNMP to other management systems having the same protocol compatibility.

The ONS 15454 supports SNMPv1 and SNMPv2c traps and get requests. The ONS 15454 SNMP MIBs define alarms, traps, and status. Through SNMP, NMS applications can query a management agent for data from functional entities such as Ethernet switches and SONET multiplexers using a supported MIB.

ONS 15454 MIB files in the CiscoV1 and CiscoV2 directories are almost identical in content except for the difference in 64-bit performance monitoring features. The CiscoV2 directory contains two 64-bit performance monitoring counters, CERENT-MSDWDM-MIB.mib and CERENT-FC-MIB.mib. The CiscoV1 directory does not contain any 64-bit counters, but it does support the lower and higher word values used in 64-bit counters. The two directories also have somewhat different formats.

First compile the MIBs in the in Table 5-2. Compile the Table 5-3 MIBs next.

If you do not compile MIBs in the correct order, one or more might not compile correctly.

If you cannot compile the proprietary MIBs correctly, log into the Technical Support Website at http://www.cisco.com/techsupport or call Cisco TAC (800) 553-2447.

The ONS 15454 generates all alarms and events, such as raises and clears, as SNMP traps. These contain the following information:

Severity and service effect of the alarm (critical, major, minor, or event; service-affecting or non-service affecting).

Date and time stamp showing when the alarm occurred.

SNMP and NMS applications have traditionally been unable to cross firewalls used for isolating security risks inside or from outside networks. Release 5.0 CTC enables network operations centers (NOCs) to access performance monitoring data such as RMON statistics or autonomous messages across firewalls by using an SMP proxy element installed on a firewall.

The firewall proxy is intended for use in a gateway network element-end network element (GNE-ENE) topology with many NEs through a single NE gateway. Up to 64 SNMP requests (such as get, getnext, or getbulk) are supported at any time behind single or multiple firewalls. The proxy interoperates with common NMS such as HP OpenView.

For security reasons, the SNMP proxy feature must be enabled at all receiving and transmitting NEs to function. For instructions to do this, refer to the Cisco ONS 15454 Procedure Guide.

The ONS 15454 incorporates RMON to allow network operators to monitor Ethernet card performance and events. The RMON thresholds are user-provisionable in CTC. Refer to the Cisco ONS 15454  Procedure Guide for instructions. Note that otherwise, RMON operation is invisible to the typical CTC user.

ONS 15454 system RMON implementation is based on the IETF-standard MIB RFC 2819 and includes the following five groups from the standard MIB: Ethernet Statistics, History Control, Ethernet History, Alarm, and Event.

For the ONS 15454, the implementation of the high-capacity remote monitoring information base (HC-RMON-MIB, or RFC 3273) enables 64-bit support of existing RMON tables. This support is provided with the etherStatsHighCapacityTable and the etherHistoryHighCapacityTable. An additional table, the mediaIndependentTable, and an additional object, hcRMONCapabilities, are also added for this support. All of these elements are accessible by any third-party SNMP client having RFC 3273 support.

The Ethernet Statistics group contains the basic statistics monitored for each subnetwork in a single table called the etherStatsTable.

The SetRequest PDU for creating a row in this table should contain all the values needed to activate a row in a single set operation, and an assigned status variable to createRequest. The SetRequest PDU object ID (OID) entries must all carry an instance value, or type OID, of 0.

The etherStatsTable creates a row if the SetRequest PDU is valid according to the above rules. When the row is created, the SNMP agent decides the value of etherStatsIndex. This value is not sequentially allotted or contiguously numbered. It changes when an Ethernet interface is added or deleted. The newly created row will have etherStatsStatus value of valid (1).

If the etherStatsTable row already exists, or if the SetRequest PDU values are insufficient or do not make sense, the SNMP agent returns an error code.

Get requests and getNext requests for the etherStatsMulticastPkts and etherStatsBroadcastPkts columns return a value of zero because the variables are not supported by ONS 15454 Ethernet cards.

The RMON is sampled at one of four possible intervals. Each interval, or period, contains specific history values (also called buckets). Table 5-6 lists the four sampling periods and corresponding buckets.

The SetRequest PDU must be able to activate a historyControlTable row in one single-set operation. In order to do this, the PDU must contain all needed values and have a status variable value of 2 (createRequest). All OIDs in the SetRequest PDU should be type OID.0 type for entry creation.

To create a creation SetRequest PDU for the historyControlTable, the following values are required:

The historyControlBucketsRequested OID value is ignored because the number of buckets allowed for each sampling period, based upon the historyControlInterval value, is already fixed as listed in Table 5-6.

The ONS 15454 implements the etherHistoryTable as defined in RFC 2819. The group is created within the bounds of the historyControlTable and does not deviate from the RFC in its design.

To create a row in the alarmTable, the SetRequest PDU must be able to create the row in one single-set operation. All OIDs in the SetRequest PDU should be type OID.0 type for entry creation. The table has a maximum number of 256 rows.

To create a creation SetRequest PDU for the alarmTable, the following values are required:

The AlarmVariable is of the type OID.ifIndex, where ifIndex gives the interface this alarm is created on and OID is one of the OIDs supported in Table 5-7.

To delete a row from the table, the SetRequest PDU should contain an alarmStatus value of 4 (invalid). A deleted row can be recreated. Entries in this table are preserved if the SNMP agent is restarted.

The Event group controls event generation and notification. It consists of two tables: the eventTable, which is a read-only list of events to be generated, and the logTable, which is a writable set of data describing a logged event. The ONS 15454 implements the logTable as specified in RFC 2819.

The eventTable is read-only and unprovisionable. The table contains one row for rising alarms and another for falling ones. This table has the following restrictions: