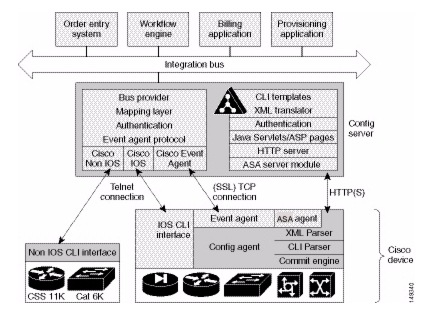 Encryption must be enabled during setup for ASA devices to supported by Cisco Configuration Engine.

The server responds with the UpdateInfo message. This message contains (optionally):

Checksum and URL for the ASA image

Checksum and URL for the ASA Device Manager (ASDM) image

URL for reporting any errors

If a software/configuration update is required, the ASA sends requests on the respective URLs.

Completion of configuration download by a ASA device results in a log file entry indicating the same in asa.log.

The DeviceDetails XML message sent along with the initial HTTPS POST optionally has information regarding the ASA image, its version, and checksum. Cisco Configuration Engine returns with the UpdateInfo XML containing image URLs and checksums based on the entries in the directory. The ASA downloads and applies images one after the other (and reloads itself if required). Any error is processed as mentioned next.

There is no notification for the successful image download because the image distribution can be external to Cisco Configuration Engine and hence, the ASA server cannot keep track of the same. Also, the ASA device does not provide any image upgrade successful indication.

All errors are reported by way of HTTPS POST to the error URL using the ErrorList message.

Each configuration error report (type=error, warning or info) is logged by the Cisco Configuration Engine into asa.log. The log file is cyclic to limit disk space usage.

An error occurring during configuration does not mean that the downloaded configuration is not applied on the ASA entirely. It only means that the error mentioned in the log file has happened with respect to this particular device.

Any error or notification (type= warning, notification, informational, debugging, emergency, alert, critical, and error) that occurs while retrieving the data at one of the URLs received from the Cisco Configuration Engine results in log file entries.

If a failure is encountered during the processing of any of the URLs in the UpdateInfo response from the server, the error is reported to the Error URL. Also, processing of all URLs received in the current call home is discontinued. Any further processing is deferred till the ASA calls home again.

The sequence of processing a DeviceDetails request from a ASA device is as follows:

ASA device contacts the Cisco Configuration Engine with the DeviceDetails message as XML payload by means of an HTTPS post request.

Template associated with this DeviceID is processed to generate a configuration file.

Configuration file is converted into XML format as per the ASA DTD and the file is saved (over-written in case a file is already present for this DeviceID).

Checksum of XML configuration file is calculated and URL noted.

URLs and checksums for ASA image and PDM images are retrieved from image object attached with the ASA device.

Checksums and URLs for configuration files and various images (if the corresponding checksum differs) and the Error URL are sent to the ASA device as an HTTP response with an XML payload (UpdateInfo).

Device now requests for configuration/image based on the content of the UpdateInfo response.

Errors are encountered, information is posted to error URL.

The error servlet logs the errors to asa.log.

The following ASA CLI decides the value of the DeviceID sent by the ASA in the DeviceDetails request:

no auto-update device-id command resets the device ID to the default of hostname.

ipaddress option uses the IP address of the interface with the name if-name.

mac-address option uses the MAC address of the interface with the name if-name.

Since the DeviceID provided by the ASA is internally mapped to ConfigID and EventID in the Cisco Configuration Engine, it only supports hyphen (-), underscore (_), period (.) and alphanumeric characters.

HTTPS is enforced as the transport protocol between ASA devices and Cisco Configuration Engine under all circumstances. DeviceDetails, Update Info, ErrorInfo, and configuration files are transported using only HTTPS. The authorization mechanism used in the Configuration Service is leveraged in the ASA server module. The URLs supplied by you toward the ASDM/ASA-image can use HTTP or HTTPS.

ASA devices can be configured to poll the Cisco Configuration Engine at regular intervals for configuration or image updates. This entry has to be made by you on the ASA device itself. Details are available from ASA device documentation. CLI format for the same is as follows:

The URI to be polled on the Cisco Configuration Engine is:

The no auto-update poll-period command resets the poll period to the default.

Also, you must map the hostname of the server on the ASA device with its IP address. You can do this by using the name command as follows:

ASA devices with software versions of 8.2 and higher are supported by Cisco Configuration Engine (auto-update from the ASA device side was introduced in this version). All ASA hardware platforms that run software version 8.2 or higher will be supported.

The configuration files will be generated with options config-action= replace and errors=revert. No other options are supported.

Following are the different type of configuration-actions.

Following are the different type of error-actions.

Stop—Stops reading the rest of the configuration when a command causes an error.