For the latest feature information and caveats, see the release notes for your platform and software release. To find information about the features documented in this module, and to see a list of the releases in which each feature is supported, see the "Feature Information for IPsec NAT Transparency" section.

To configure the IPsec NAT Transparency feature, you must understand the following concepts:

Incompatibility Between IPsec ESP and PAT—Resolved

Incompatibility Between Checksums and NAT—Resolved 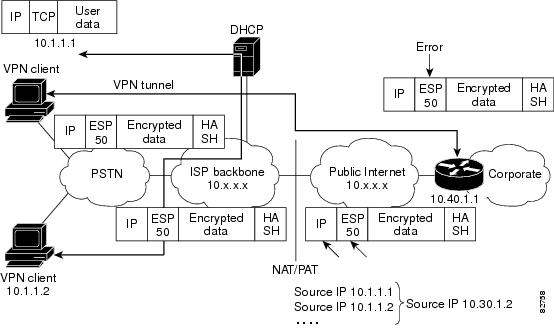 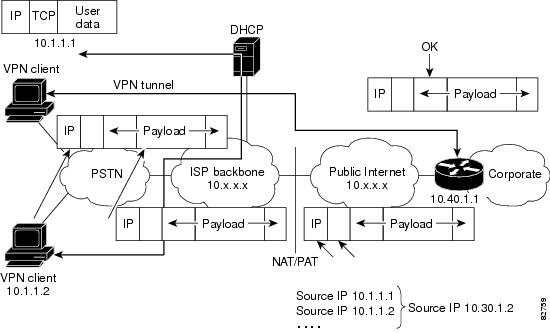 Figure 3 Transport Mode—IPsec Packet Before and After ESP Encapsulation

Figure 4 Tunnel Mode—IPsec Packet Before and After ESP Encapsulation

NAT keepalives are enabled to keep the dynamic NAT mapping alive during a connection between two peers. NAT keepalives are UDP packets with an unencrypted payload of 1 byte. Although the current dead peer detection (DPD) implementation is similar to NAT keepalives, there is a slight difference: DPD is used to detect peer status, while NAT keepalives are sent if the IPsec entity did not send or receive the packet at a specified period of time—valid range is between 5 to 3600 seconds.

If NAT keepalives are enabled (via the crypto isakmp nat keepalive command), users should ensure that the idle value is shorter than the NAT mapping expiration time, which is 20 seconds.


Configuration Examples for IPsec and NAT

IPsec—IP Security. Framework of open standards developed by the Internet Engineering Task Force (IETF). IPsec provides security for transmission of sensitive information over unprotected networks such as the Internet. IPsec acts at the network layer, protecting and authenticating IP packets between participating IPsec devices ("peers"), such as Cisco routers.

NAT—Network Address Translation. Translates a private IP address used inside the corporation to a public, routable address for use on the outside of the corporation, such as the Internet. NAT is considered a one-to-one mapping of addresses from private to public.

PAT—Port Address Translation. Like NAT, PAT also translated private IP address to public, routable addresses. Unlike NAT, PAT provides a many-to-one mapping of private addresses to a public address; each instance of the public address is associated with a particular port number to provide uniqueness. PAT can be used in environments where the cost of obtaining a range of public addresses is too expensive for an organization.

Cisco and the Cisco Logo are trademarks of Cisco Systems, Inc. and/or its affiliates in the U.S. and other countries. A listing of Cisco's trademarks can be found at http://www.cisco.com/go/trademarks. Third party trademarks mentioned are the property of their respective owners. The use of the word partner does not imply a partnership relationship between Cisco and any other company. (1005R)