Prerequisites for PPP over Frame Relay

Before you can configure PPP over Frame Relay, Frame Relay must be enabled on the router using the encapsulation frame-relay command.

Restrictions for PPP over Frame Relay

Information About PPP over Frame Relay

Overview of PPP over Frame Relay

The PPP over Frame Relay feature allows a router to establish end-to-end Point-to-Point Protocol (PPP) sessions over Frame Relay. IP datagrams are transported over the PPP link using RFC 1973 compliant Frame Relay framing. This feature is useful for remote users running PPP to access their Frame Relay corporate networks as shown in the figure below. 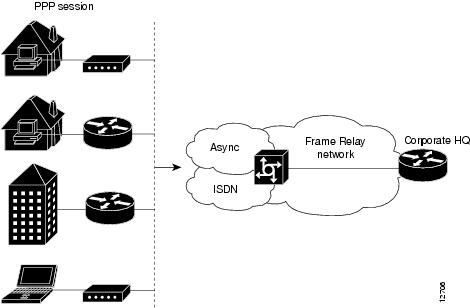 The figure below shows a connectivity scenario using the Cisco 90i D4 channel card, which is capable of supporting Integrated Services Digital Network (ISDN) Digital Service Loop (DSL), PPP, or Frame Relay, which connects to an Internet Service Provider (ISP) or corporate network. 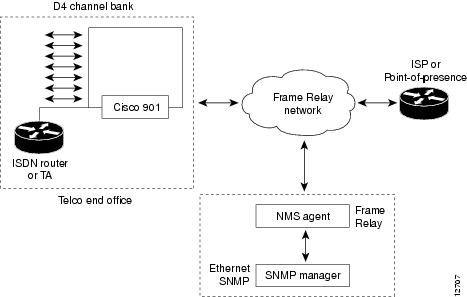 PPP over Frame Relay is compliant with the functionality and encapsulation specifications as outlined in RFC 1973. The frame format is shown in the figure below.

The breakdown of the Frame Relay frame format components is listed in the table below.

How to Configure PPP over Frame Relay

Perform the following task to configure the physical interface that carries the PPP session and links to the appropriate virtual template interface.

The following example configures a router to act as a data communications equipment (DCE) device. Typically, a router is configured as a DCE if connecting directly to another router or if connected to a 90i D4 channel unit, which is connected to a telco channel bank. The three commands required for this type of configuration are frame-relay switching, frame-relay intf-type dce, and frame-relay route commands.

data-link connection identifier (DLCI) --A value that specifies a PVC or SVC in a Frame Relay network. In the basic Frame Relay specification, DLCIs are locally significant (connected devices might use different values to specify the same connection). In the LMI extended specification, DLCIs are globally significant (DLCIs specify individual end devices).

Point-to-Point Protocol (PPP) --A protocol that encapsulates network layer protocol information over point-to-point links. The RFC for PPP is RFC 1661.