The Unicast Reverse Path Forwarding Loose Mode feature creates a new option for Unicast Reverse Path Forwarding (Unicast RPF), providing a scalable anti-spoofing mechanism suitable for use in multihome network scenarios. This mechanism is especially relevant for Internet Service Providers (ISPs), specifically on routers that have multiple links to multiple ISPs. In addition, Unicast RPF (strict or loose mode), when used in conjunction with a Border Gateway Protocol (BGP) “trigger,” provides an excellent quick reaction mechanism that allows network traffic to be dropped on the basis of either the source or destination IP address, giving network administrators an efficient tool for mitigating denial of service (DoS) and distributed denial of service (DDoS) attacks.

To use Unicast RPF, you must enable Cisco Express Forwarding (CEF) switching or distributed CEF (dCEF) switching in the router. There is no need to configure the input interface for CEF switching. As long as CEF is running on the router, individual interfaces can be configured for other switching modes.

A number of common types of DoS attacks take advantage of forged or rapidly changing source IP addresses, allowing attackers to thwart efforts by ISPs to locate or filter these attacks. Unicast RPF was originally created to help mitigate such attacks by providing an automated, scalable mechanism to implement the Internet Engineering Task Force (IETF) Best Common Practices 38/Request for Comments 2827 (BCP 38/RFC 2827) anti-spoofing filtering on the customer-to-ISP network edge. By taking advantage of the information stored in the Forwarding Information Base (FIB) that is created by the CEF switching process, Unicast RPF can determine whether IP packets are spoofed or malformed by matching the IP source address and ingress interface against the FIB entry that reaches “back” to this source (a so-called “reverse lookup”). Packets that are received from one of the best reverse path routes back out of the same interface are forwarded as normal. If there is no reverse path route on the same interface from which the packet was received, it might mean that the source address was modified, and the packet is dropped (by default).

This original implementation of Unicast RPF, known as “strict mode,” required a match between the ingress interface and the reverse path FIB entry. With Unicast RPF, all equal-cost “best” return paths are considered valid, meaning that it works for cases in which multiple return paths exist, provided that each path is equal in routing cost to the others (number of hops, weights, and so on), and as long as the route is in the FIB. Unicast RPF also functions when Enhanced Interior Gateway Routing Protocol (EIGRP) variants are being used and unequal candidate paths back to the source IP address exist. The strict mode works well for customer-to-ISP network edge configurations that have symmetrical flows (including some multihomed configurations in which symmetrical flows can be enforced).

However, some customer-to-ISP network edges and nearly all ISP-to-ISP network edges use multihomed configurations in which routing asymmetry is typical. When traffic flows are asymmetrical, that is, those in which traffic from Network A to Network B would normally take a different path from traffic flowing from Network B to Network A, the Unicast RPF check will always fail the strict mode test. Because this type of asymmetric routing is common among ISPs and in the Internet core, the original implementation of Unicast RPF was not available for use by ISPs on their core routers and ISP-to-ISP links.

Over time and with an increase in DDoS attacks on the Internet, the functionality of Unicast RPF was reviewed as a tool that ISPs can use on the ISP-to-ISP network edge (an ISP router “peered” with another ISP router) to enable dynamic BGP, triggered black-hole filtering. To provide this functionality, however, the mechanisms used with Unicast RPF had to be modified to permit its deployment on the ISP-to-ISP network edge so that asymmetrical routing is not an issue.

To provide ISPs with a DDoS resistance tool on the ISP-to-ISP edge of a network, Unicast RPF was modified from its original strict mode implementation to check the source addresses of each ingress packet without regard for the specific interface on which it was received. This modification is known as “loose mode.” Loose mode allows Unicast RPF to automatically detect and drop packets such as the following:

Loose mode removes the match requirement on the specific ingress interface, allowing Unicast RPF to loose-check packets. This packet checking allows the “peering” router of an ISP having multiple links to multiple ISPs to check the source IP address of ingress packets to determine whether they exist in the FIB. If they exist, the packets are forwarded. If they do not exist in the FIB, the packets fail and are dropped. This checking increases resistance against DoS and DDoS attacks that use spoofed source addresses and unallocated IP addresses.

If the network administrator believes that Unicast Reverse Path Forwarding (Unicast RPF) is dropping packets that are deemed valid, you must configure an access list within Unicast RPF to pass these specific packets.

The show ip interface command output displays drop counters on a per-interface basis. If the packet drop counter is increasing, Unicast RPF is dropping packets on the referenced interface.

The following example (see the figure below) uses a simple dual-homed ISP to demonstrate the concept of Unicast RPF loose mode. The example illustrates an ISP (A) peering router that is connected to two different upstream ISPs (B and C) and shows that traffic flows into and out of ISP A may be asymmetric given this dual-homed configuration. Hence, provisions for asymmetrical flows (when outbound traffic goes out one link and returns via a different link) must be accounted for by the Unicast RPF deployment. In this case, it is appropriate to use the loose-mode configuration of Unicast RPF because this configuration alleviates the interface dependency of strict mode. 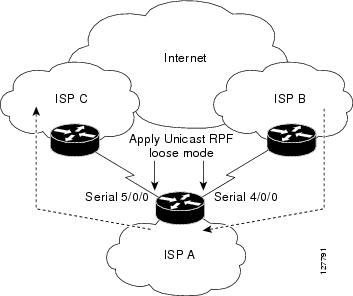