Configure MQC in your network.

MQC allows you to configure QoS using a generic CLI that is applicable to all types of interfaces and protocols. MQC builds configurations that depend on HQF for queueing and shaping.

For example, to support Frame Relay, extensions to the HQF mechanism were required so that fragmentation could be provided within the queueing framework. These extensions enable priority queueing (PQ) configurations to be set up to support latency-sensitive traffic.

HQF provides queueing and shaping capabilities. HQF is a logical engine used to support QoS features. The HQF hierarchy is a tree structure that is built using policy maps.

When data passes through an interface using HQF, the data is classified so that it traverses the branches of the tree. Data arrives at the top of the tree and is classified on one of the leaves. Data then traverses down the hierarchy (tree) until it is transmitted out the interface at the root (trunk).

For example, the following configuration builds the hierarchy shown in the figure below: 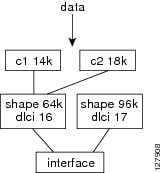 You can apply class-based queueing to any traffic class in the parent or child level of a hierarchical policy and obtain service levels for different sessions or subscribers.

You can apply class-based shaping within an ATM PVC as shown in the following example:

You can apply a child policy to a class with priority enabled as shown in the following example. The child policy can contain police or set features, but not queueing features.

In HQF, when you enable fair queueing, the per-flow queue limit is calculated in one of the following ways:

These values are static even if the number of flows increase, so consider the overall buffer pool when configuring the queue limit in order to avoid exhausting the buffer pool.

It is recommended to use the default value or 200 ms worth of packets/bytes for the “queue limit per class”.

Shaping on a GRE Tunnel

A typical hierarchical policy applied to a GRE tunnel interface is shown below:

With HQF implementation, when you enable Frame Relay fragmentation (FRF.12) on an FR PVC or FR main interface, priority class packets are no longer subject to fragmentation. Priority packets, regardless of the packet size, always interleave among data fragments.

The example below shows a nested policy applied on a serial interface of 1536 kbps. The 1536 kbps is equally shared, as the implicit bandwidth, among parent classes parent-c1 and class-default. For the parent class, the shaping rate of 1200 kbps is the maximum, while the implicit guarantee of 768 kbps is the minimum.

For the child policy child-c1 to take the parent shaping rate as the reference bandwidth, configure parent class parent-c1 with an explicit guarantee greater than the shaping rate. For example,

When configuring explicit bandwidth for parent classes with oversubscription, the restrictions in the "Policy Map Bandwidth" section applies.

Handling Traffic Congestion on an Interface Configured with a Policy Map

In Cisco IOS Release 12.4(20)T, if an interface configured with a policy map is congested, the implicitly defined queue allows the traffic as defined in the bandwidth statement of each traffic class. The queueing is activated whenever there is traffic congestion on an interface.

There are two main tasks for configuring this feature:

In the following example, a policy map called shape is configured on serial interface 4/3 and attached in the output direction. Its parameters include a class class-default, a traffic shaping average of 256000 bps, and Frame Relay encapsulation.

In the following example, shaping is active with HQF installed on serial interface 4/3. All traffic is classified to the class-default queue.