Service providers that use relatively low-speed links can use MLP to spread traffic across them in their MPLS networks. Link fragmentation and interleaving (LFI) should be deployed in the CE-to-PE link for efficiency, where traffic uses a lower link bandwidth (less than 768 kbps). The MPLS Multilink PPP Support feature can reduce the number of Interior Gateway Protocol (IGP) adjacencies and facilitate load sharing of traffic.

The MPLS Multilink PPP Support feature is limited by platform-specific restrictions that apply to the use of Multilink PPP (MLP) and distributed MLP (dMLP).

The figure below shows a typical Multiprotocol Label Switching (MPLS) network in which the provider edge (PE) device is responsible for label imposition (at ingress) and disposition (at egress) of the MPLS traffic.

In this topology, Multilink PPP (MLP) is deployed on the PE-to-customer edge (CE) links. The Virtual Private Network (VPN) routing and forwarding instance (VRF) interface is in a multilink bundle. There is no MPLS interaction with MLP; all packets coming into the MLP bundle are IP packets.

You employ MLP in the PE-to-P or P-to-P links primarily so that you can reduce the number of Interior Gateway Protocol (IGP) adjacencies and facilitate the load sharing of traffic.

In addition to requiring MLP on the PE-to-P links, the MPLS Multilink PPP Support feature requires the configuration of an IGP routing protocol and the Label Distribution Protocol (LDP). 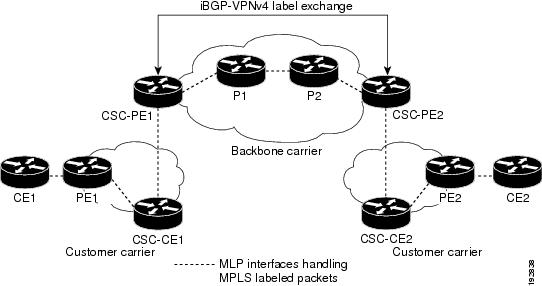 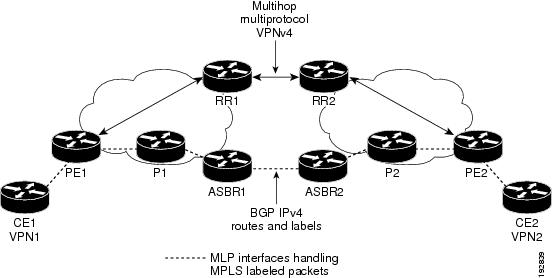 If Cisco Express Forwarding is not enabled on your platform, the output for the show ip cef command looks like this:

Distributed Cisco Express Forwarding is enabled by default on devices such as the Catalyst 6500 series switch, the Cisco 7500 series router, and the Cisco 12000 series Internet router.

3.    Enter one of the following commands:

Perform this task to create a multilink bundle for the MPLS Multilink PPP Support feature. This multilink bundle can reduce the number of Interior Gateway Protocol (IGP) adjacencies and facilitate load sharing of traffic.

Assigning an Interface to a Multilink Bundle

If your data traffic is consistently of a similar size, we recommend disabling fragmentation. In this case, the benefits of fragmentation can be outweighed by the added load on the CPU.

The following examples show sample configurations for Multilink PPP (MLP) on a Cisco 7200 router, on a Cisco 7500 router, and on a Carrier Supporting Carrier (CSC) network. The configuration of MLP on an interface is the same for provider edge-to-customer edge (PE-to-CE) links, PE-to-provider (P) links, and P-to-P links.

The following sample configuration is for a Cisco 7200 router, which is connected with a T1 line card and configured with an MPLS Multilink PPP interface:

The following sample configuration is for a Cisco 7500 router, which is connected with a T1 line card and configured with an MPLS Multilink PPP interface:

The following example shows how to create a multilink bundle for the MPLS Multilink PPP Support feature:

Example: Assigning an Interface to a Multilink Bundle

The following example shows how to create four multilink interfaces with Cisco Express Forwarding switching and Multilink PPP (MLP) enabled. Each of the newly created interfaces is added to a multilink bundle.

bundle—A group of interfaces connected by parallel links between two systems that have agreed to use Multilink PPP (MLP) over those links.

Cisco Express Forwarding—A proprietary form of switching that optimizes network performance and scalability for networks with large and dynamic traffic patterns, such as the Internet, and for networks characterized by intensive web-based applications or interactive sessions. Although you can use Cisco Express Forwarding in any part of a network, it is designed for high-performance, highly resilient Layer 3 IP backbone switching.

LCP—Link Control Protocol. A protocol that establishes, configures, and tests data link connections for use by PPP.

LFI—ink fragmentation and interleaving. The LFI feature reduces delay on slower-speed links by breaking up large datagrams and interleaving low-delay traffic packets with the smaller packets resulting from the fragmented datagram. LFI allows reserve queues to be set up so that Real-Time Protocol (RTP) streams can be mapped into a higher priority queue in the configured weighted fair queue set.

link—One of the interfaces in a bundle.

MLP—Multilink PPP. A method of splitting, recombining, and sequencing datagrams across multiple logical links. The use of MLP increases throughput between two sites by grouping interfaces and then load balancing packets over the grouped interfaces (called a bundle). Splitting packets at one end, sending them over the bundled interfaces, and recombining them at the other end achieves load balancing.

MQC—Modular QoS CLI. MQC is a CLI structure that allows users to create traffic polices and attach these polices to interfaces. MQC allows users to specify a traffic class independently of QoS policies.

NCP—Network Control Protocol. A series of protocols for establishing and configuring different network layer protocols (such as for AppleTalk) over PPP.

Virtual bundle interface—An interface that represents the master link of a bundle. It is not tied to any physical interface. Data going over the bundle is transmitted and received through the master link.

WFQ—weighted fair queueing. A congestion management algorithm that identifies conversations (in the form of traffic streams), separates packets that belong to each conversation, and ensures that capacity is shared fairly among the individual conversations. WFQ is an automatic way of stabilizing network behavior during congestion and results in improved performance and reduced retransmission.

WRED—weighted random early detection. A queueing method that ensures that high-precedence traffic has lower loss rates than other traffic during times of congestion.