To understand how switching works, it is important to understand the basic device architecture and where various processes occur in the device.

Fast switching is enabled by default on all interfaces that support fast switching. Understanding of how various processes affect the device and where they occur will help you determine your alternatives when you have to disable fast switching and fall back on the process-switching path. This understanding is helpful when you are troubleshooting traffic problems or need to process packets that require special handling. Some diagnostic or control resources are not compatible with fast switching or come at the expense of processing and switching efficiency. Understanding the effects of resources can help you minimize their effect on network performance.

The following figure illustrates a possible internal configuration on a device. In this figure, the device has an integrated Route Switch Processor (RSP) and uses route caching to forward packets. The device also uses Versatile Interface Processors (VIPs), a RISC-based interface processor that receives and caches routing information from the RSP. The VIP card uses the route cache to make switching decisions locally, which relieves the RSP of involvement and speeds overall throughput. This type of switching is called distributed switching. Multiple VIP cards can be installed in one device.
Figure 1. Basic Router Architecture

The routing or forwarding function comprises of the following interrelated processes to move the information in the network:

The routing process assesses the source and destination of the traffic based on knowledge of network conditions. Routing functions identify the best path to use for moving the traffic to the destination out of one or more of the device interfaces. The routing decision is based on various criteria such as link speed, topological distance, and protocol. Each protocol maintains its own routing information.

Routing is more process intensive and has higher latency than switching as it determines path and next hop considerations. The first packet routed requires a lookup in the routing table to determine the route. The route cache is populated after the first packet is routed by the route-table lookup. Subsequent traffic for the same destination is switched using the routing information stored in the route cache. 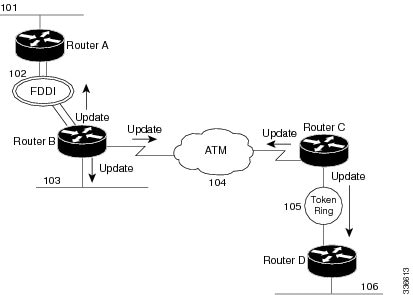 A router sends routing updates out to each of its interfaces that are configured for a particular protocol. It also receives routing updates from other attached devices. From these received updates and its knowledge of attached networks, it builds a map of the network topology.

When in severe overload conditions, devices that cannot keep up with the incoming packet stream must drop packets. If no intelligence is applied to choosing which packets to discard, the stability of routing protocols is impacted. The Selective Packet Discard (SPD) feature applies some simple choices to selectively discard packets likely to be unimportant for routing and interface stability. SPD is enabled by default; there are no commands or configuration tasks required.

Through the switching process, the device determines the next hop toward the destination address. Switching moves traffic from an input interface to one or more output interfaces. Switching is optimized and has lower latency than routing because it can move packets, frames, or cells from buffer to buffer with simpler determination of the source and destination of the traffic. It saves resources because it does not involve extra lookups. The following figure illustrates the basic switching process:
Figure 3. The Switching Process 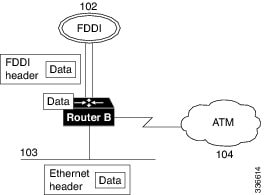 The destination address is stored in tables such as Address Resolution Protocol (ARP) tables for IP or AppleTalk Address Resolution Protocol (AARP) tables for AppleTalk. If there is no entry for the destination, the device will either drop the packet (and inform the user if the protocol provides that feature) or discover the destination address by some other address resolution process, such as through ARP. Layer 3 IP addressing information is mapped to the Layer 2 MAC address for the next hop. The following figure illustrates the mapping that occurs to determine the next hop.

In process switching the first packet is copied to the system buffer. The device looks up the Layer 3 network address in the routing table and initializes the fast-switch cache. The frame is rewritten with the destination address and sent to the outgoing interface that services that destination. Subsequent packets for that destination are sent by the same switching path. The route processor computes the cyclical redundancy check (CRC).

In distributed switching, the switching process occurs on Versatile Interface Processor (VIP) and other interface cards that support switching. When distributed Cisco Express Forwarding is enabled, line cards, such as VIP line cards or GSR line cards, maintain an identical copy of the FIB and adjacency tables. The line cards perform the express forwarding between port adapters, relieving the RSP of involvement in the switching operation. distributed Cisco Express Forwarding uses an Inter Process Communication (IPC) mechanism to ensure synchronization of FIBs and adjacency tables on the RP and line cards. 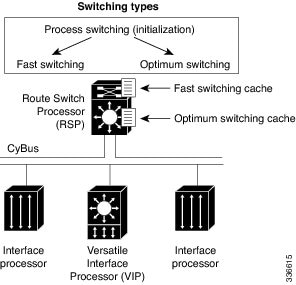 These features include the following:

Queueing occurs when network congestion occurs. When traffic is moving well within the network, packets are sent as they arrive at the interface. Cisco software implements the following different queueing algorithms:

You can define access lists to control access to or from a device for a number of services. For example, you can define an access list to prevent packets with a certain IP address from leaving a particular interface on a device. How access lists are used depends on the protocol. For information on access lists, see the appropriate Cisco IOS configuration guide.

Encryption algorithms are applied to data to alter its appearance, making it incomprehensible to those not authorized to see the data. For information about encryption features available with the Cisco software, see the Cisco IOS Security Configuration Guide.

adjacency —A relationship formed between selected neighboring routers and end nodes for the purpose of exchanging routing information. Adjacency is based upon the use of a common media segment by the routers and nodes involved.

LIB —label information base. A database used by a label switch router (LSR) to store labels learned from other LSRs, as well as labels assigned by the local LSR.

line card —A general term for an interface processor that can be used in various Cisco products. For example, a Versatile Interface Processor (VIP) is a line card for the Cisco 7500 series router.

RP —Route Processor. The processor module in the Cisco 7000 series routers that contains the CPU, system software, and most of the memory components that are used in the router. It is sometimes called a supervisory processor.

VPN —Virtual Private Network. The result of a router configuration that enables IP traffic to use tunneling to travel securely over a public TCP/IP network.

THE SPECIFICATIONS AND INFORMATION REGARDING THE PRODUCTS IN THIS MANUAL ARE SUBJECT TO CHANGE WITHOUT NOTICE. ALL STATEMENTS, INFORMATION, AND RECOMMENDATIONS IN THIS MANUAL ARE BELIEVED TO BE ACCURATE BUT ARE PRESENTED WITHOUT WARRANTY OF ANY KIND, EXPRESS OR IMPLIED. USERS MUST TAKE FULL RESPONSIBILITY FOR THEIR APPLICATION OF ANY PRODUCTS.

NOTWITHSTANDING ANY OTHER WARRANTY HEREIN, ALL DOCUMENT FILES AND SOFTWARE OF THESE SUPPLIERS ARE PROVIDED “AS IS" WITH ALL FAULTS. CISCO AND THE ABOVE-NAMED SUPPLIERS DISCLAIM ALL WARRANTIES, EXPRESSED OR IMPLIED, INCLUDING, WITHOUT LIMITATION, THOSE OF MERCHANTABILITY, FITNESS FOR A PARTICULAR PURPOSE AND NONINFRINGEMENT OR ARISING FROM A COURSE OF DEALING, USAGE, OR TRADE PRACTICE.

IN NO EVENT SHALL CISCO OR ITS SUPPLIERS BE LIABLE FOR ANY INDIRECT, SPECIAL, CONSEQUENTIAL, OR INCIDENTAL DAMAGES, INCLUDING, WITHOUT LIMITATION, LOST PROFITS OR LOSS OR DAMAGE TO DATA ARISING OUT OF THE USE OR INABILITY TO USE THIS MANUAL, EVEN IF CISCO OR ITS SUPPLIERS HAVE BEEN ADVISED OF THE POSSIBILITY OF SUCH DAMAGES.

Cisco and the Cisco logo are trademarks or registered trademarks of Cisco and/or its affiliates in the U.S. and other countries. To view a list of Cisco trademarks, go to this URL: http:/​/​www.cisco.com/​go/​trademarks. Third-party trademarks mentioned are the property of their respective owners. The use of the word partner does not imply a partnership relationship between Cisco and any other company. (1110R)