This module describes how to configure and use a sham-link to connect Virtual Private Network (VPN) client sites that run the Open Shortest Path First (OSPF) protocol and share backdoor OSPF links in a Multiprotocol Label Switching (MPLS) VPN configuration.

In an MPLS VPN configuration, the OSPF protocol is one way you can connect customer edge (CE) routers to service provider edge (PE) routers in the VPN backbone. OSPF is often used by customers that run OSPF as their intrasite routing protocol, subscribe to a VPN service, and want to exchange routing information between their sites using OSPF (during migration or on a permanent basis) over an MPLS VPN backbone.

The figure below shows an example of how VPN client sites that run OSPF can connect over an MPLS VPN backbone.

When OSPF is used to connect PE and CE routers, all routing information learned from a VPN site is placed in the VPN routing and forwarding (VRF) instance associated with the incoming interface. The PE routers that attach to the VPN use the Border Gateway Protocol (BGP) to distribute VPN routes to each other. A CE router can then learn the routes to other sites in the VPN by peering with its attached PE router. The MPLS VPN superbackbone provides an additional level of routing hierarchy to interconnect the VPN sites running OSPF.

When OSPF routes are propagated over the MPLS VPN backbone, additional information about the prefix in the form of BGP extended communities (route type, domain ID extended communities) is appended to the BGP update. This community information is used by the receiving PE router to decide the type of link-state advertisement (LSA) to be generated when the BGP route is redistributed to the OSPF PE-CE process. In this way, internal OSPF routes that belong to the same VPN and are advertised over the VPN backbone are seen as interarea routes on the remote sites.

For basic information about how to configure an MPLS VPN, refer to the "MPLS Virtual Private Networks Configuration" module.

Although OSPF PE-CE connections assume that the only path between two client sites is across the MPLS VPN backbone, backdoor paths between VPN sites (shown in grey in the figure below) may exist. If these sites belong to the same OSPF area, the path over a backdoor link will always be selected because OSPF prefers intraarea paths to interarea paths. (PE routers advertise OSPF routes learned over the VPN backbone as interarea paths.) For this reason, OSPF backdoor links between VPN sites must be taken into account so that routing is performed based on policy. 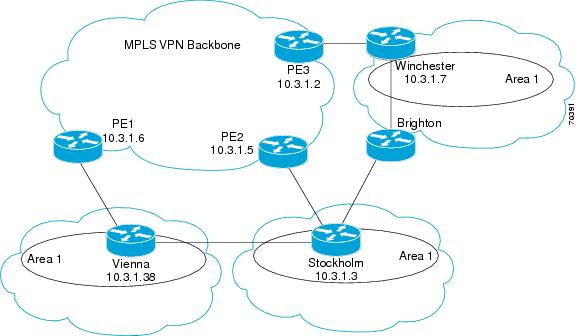 For example, the figure above shows three client sites, each with backdoor links. Because each site runs OSPF within the same Area 1 configuration, all routing between the three sites follows the intraarea path across the backdoor links, rather than over the MPLS VPN backbone.

The following example shows BGP routing table entries for the prefix 10.3.1.7/32 in the PE-1 router in the figure above. This prefix is the loopback interface of the Winchester CE router. As shown in bold in this example, the loopback interface is learned via BGP from PE-2 and PE-3. It is also generated through redistribution into BGP on PE-1.

Within BGP, the locally generated route (10.2.1.38) is considered to be the best route. However, as shown in bold in the next example, the VRF routing table shows that the selected path is learned via OSPF with a next hop of 10.2.1.38, which is the Vienna CE router.

This path is selected because:

If the backdoor links between sites are used only for backup purposes and do not participate in the VPN service, then the default route selection shown in the preceding example is not acceptable. To reestablish the desired path selection over the MPLS VPN backbone, you must create an additional OSPF intra-area (logical) link between ingress and egress VRFs on the relevant PE routers. This link is called a sham-link. 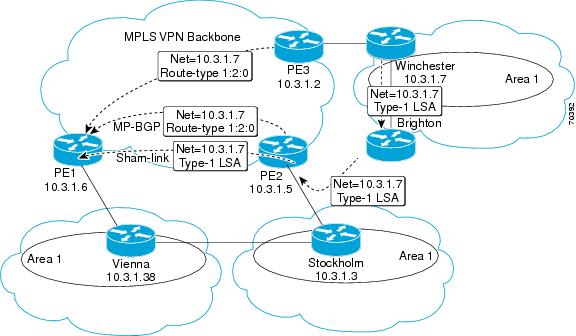 Because the sham-link is seen as an intra-area link between PE routers, an OSPF adjacency is created and database exchange (for the particular OSPF process) occurs across the link. The PE router can then flood LSAs between sites from across the MPLS VPN backbone. As a result, the desired intra-area connectivity is created.

The section, "Creating a Sham-Link", describes how to configure a sham-link between two PE routers. For more information about how to configure OSPF, refer to the "Configuring OSPF" module.

The example in this section is designed to show how a sham-link is used only to affect the OSPF intra-area path selection of the PE and CE routers. The PE router also uses the information received from MP-BGP to set the outgoing label stack of incoming packets, and to decide to which egress PE router to label switch the packets. 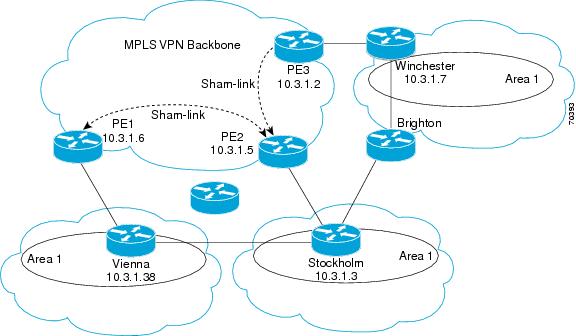 The following example shows the forwarding that occurs between sites from the standpoint of how PE-1 views the 10.3.1.7/32 prefix, the loopback1 interface of the Winchester CE router in the figure above.

The next example shows forwarding information in which the next hop for the route, 10.3.1.2, is the PE-3 router rather than the PE-2 router (which is the best path according to OSPF). The reason the OSPF route is not redistributed to BGP on the PE is because the other end of the sham-link already redistributed the route to BGP and there is no need for duplication. The OSPF sham-link is used only to influence intra-area path selection. When sending traffic to a particular destination, the PE router uses the MP-BGP forwarding information.

If a prefix is learned across the sham-link and the path via the sham-link is selected as the best, the PE router does not generate an MP-BGP update for the prefix. It is not possible to route traffic from one sham-link over another sham-link.

In the following example, PE-2 shows how an MP-BGP update for the prefix is not generated. Although 10.3.1.7/32 has been learned via OSPF across the sham-link as shown in bold, no local generation of a route into BGP is performed. The only entry within the BGP table is the MP-BGP update received from PE-3 (the egress PE router for the 10.3.1.7/32 prefix).

The PE router uses the information received from MP-BGP to set the ongoing label stack of incoming packets, and to decide to which egress PE router to label switch the packets.

A sham-link overcomes the OSPF default behavior for selecting an intra-area backdoor route between VPN sites instead of an interarea (PE-to-PE) route. A sham-link ensures that OSPF client sites that share a backdoor link can communicate over the MPLS VPN backbone and participate in VPN services.

In an MPLS VPN configuration, the OSPF cost configured with a sham-link allows you to decide if OSPF client site traffic will be routed over a backdoor link or through the VPN backbone.

When OSPF is used as a protocol between PE and CE routers, the OSPF metric is preserved when routes are advertised over the VPN backbone. The metric is used on the remote PE routers to select the correct route. For this reason, you should not modify the metric value when OSPF is redistributed to BGP, and when BGP is redistributed to OSPF. If you modify the metric value, routing loops may occur.

Cisco Feature Navigator is a web-based tool that enables you to quickly determine which Cisco IOS software images support a specific set of features and which features are supported in a specific Cisco IOS image. You can search by feature or release. Under the release section, you can compare releases side by side to display both the features unique to each software release and the features in common.

No new or modified MIBs are supported by this feature.

No new or modified RFCs are supported by this feature.

Before you can configure a sham-link in an MPLS VPN, you must first enable OSPF as follows:

For more information on these OSPF configuration procedures, go to:

See the following sections for configuration tasks for the sham-link feature. Each task in the list is identified as either required or optional.

Before you create a sham-link between PE routers in an MPLS VPN, you must:

You can use the /32 address for other sham-links.

To verify that the sham-link was successfully created and is operational, use the show ip ospf sham-links command in EXEC mode:

Monitoring and Maintaining a Sham-Link

The following example shows how to configure a sham-link between two PE routers:

BGP --Border Gateway Protocol. Interdomain routing protocol that exchanges reachability information with other BGP systems. It is defined in RFC 1163.

CE router --customer edge router. A router that is part of a customer network and that interfaces to a provider edge (PE) router. CE routers are not aware of associated VPNs.

LSA --link-state advertisement. A broadcast packet used by link-state protocols. The LSA contains information about neighbors and path costs and is used by the receiving router to maintain a routing table.

MPLS --Multiprotocol Label Switching. Emerging industry standard upon which tag switching is based.

PE router --provider edge router. A router that is part of a service provider network connected to a customer edge (CE) router. All VPN processing occurs in the PE router.

VPN --Virtual Private Network. A secure IP-based network that shares resources on one or more physical networks. A VPN contains geographically dispersed sites that can communicate securely over a shared backbone.