Routers in a Dynamic Multipoint VPN (DMVPN) network use Next Hop Resolution Protocol (NHRP) to discover the addresses of other routers and networks behind those routers that are connected to a nonbroadcast multiaccess (NBMA) DMVPN. The shortcut switching enhancements for NHRP provide an Address Resolution Protocol (ARP)-like solution that alleviates NBMA network problems, such as hub failure, decreased reliability, and complex configurations. With NHRP, systems attached to an NBMA network dynamically learn the NBMA address of the other systems that are part of that network, allowing these systems to directly communicate without requiring traffic to use an intermediate hop.

The following restrictions apply to this feature:

In previous implementations of DMVPN, the hub uses NHRP to maintain a database of the spokes’ real (publicly reachable) IP addresses. Spokes in a DMVPN network register their real IP address with the hub using periodic NHRP registration packets. When a spoke has traffic for a destination behind another spoke, it uses an NHRP resolution request to query the NHRP database on the hub for the NBMA address of destination spokes. NHRP uses the resolution request process to build a direct spoke-to-spoke tunnel.

However, there were some issues with scaling implementations of DMVPN networks to large sizes (large number of spokes):

The Shortcut Switching Enhancements for NHRP in DMVPN Networks feature provides a more scalable alternative to the previous NHRP model.

NHRP shortcut switching is now a feature in the CEF output feature switching path. For each data packet that is forwarded out the multipoint Generic Routing Encapsulation (mGRE) interface, NHRP performs a lookup in its mapping table to find an entry for the destination IP address of the data packet. If there is one, it overrides the adjacency determined by CEF during the Forwarding Information Base/Adjacency (FIB/ADJ) lookup. This lookup process is how data packets are redirected over the spoke-to-spoke direct tunnel rather than being forwarded to the hub as the routing table states.

For each NHRP mapping entry, NHRP keeps a reference to the CEF adjacency entry. This adjacency overrides the FIB-adjacency during CEF output feature processing. The figure below shows an example of the NHRP mapping table for shortcut switching. 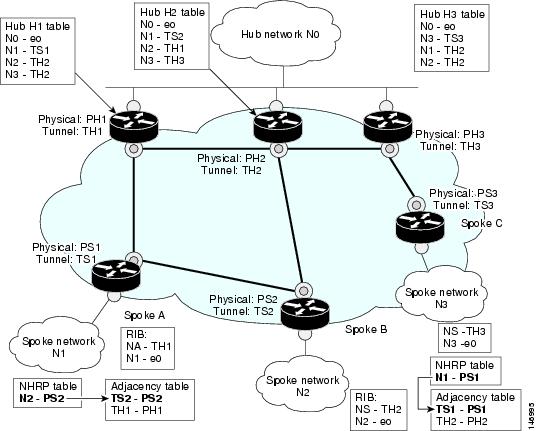 In the figure above, the packet flow is as follows:

When an NHRP hub replies to a resolution request, it creates a local NHRP mapping entry. The local mapping entry is a network entry for which NHRP has sent a reply. The local mapping entry maintains a list of requestors. When a network entry is modified or deleted in the routing table, NHRP is notified of the event. NHRP finds the local cache entry for the network and sends a purge request to the requestors that the network to which it previously replied has changed. The receivers of the purge message delete the corresponding NHRP mapping entry from its table and send a purge reply indicating that the purge message was processed successfully.

How to Configure Shortcut Switching for NHRP

Perform this task to enable shortcut switching for NHRP for an interface on a router.

NHRP sends a resolution request for a shortcut path after receiving an NHRP redirect traffic indication message. An NHRP redirect traffic indication is generated by an intermediate node when a data packet is forwarded within the same DMVPN network (in and out the same tunnel interface). The redirect is sent to the previous tunnel hop (spoke) on the tunnel from which the data packet was received.

Like an Internet Control Message Protocol (ICMP) message, the NHRP redirect message includes the IP header and the first eight data bytes of the data packet that triggers the redirect. This information is used by NHRP on the previous tunnel hop to determine whether and where to send a resolution request. That is, NHRP would match against the interest list configuration to determine whether to send a resolution request.

The following example shows how to configure NHRP shortcut switching and NHRP redirect on tunnel interface 0: