Standards and Compliance Specifications for SFP and SFP+ Optical Transceivers

This installation note provides the installation instructions for the Cisco small form-factor pluggable (SFP) and SFP+ transceiver modules. These transceiver modules are hot-swappable input/output (I/O) devices that plug into 100BASE, 1000BASE and 10GBASE ports (for SFP+), which connect the module port with the fiber-optic or copper network.

This document contains these sections:

The SFP transceiver modules are hot-pluggable I/O devices that plug into module sockets. The transceiver connects the electrical circuitry of the module with the optical or copper network.

You can use any combination of SFP transceiver modules that your Cisco device supports. The only restrictions are that each port must match the wavelength specifications on the other end of the cable and that the cable must not exceed the stipulated cable length for reliable communications.

An optical SFP transceiver module is shown in Figure 1. 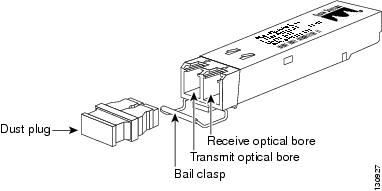 SFP transceiver modules that operate with single-strand SMF, have only one optical bore; the other bore is blocked off.

A copper SFP transceiver module in shown in Figure 2.

An SFP+ transceiver module is shown in Figure 3. 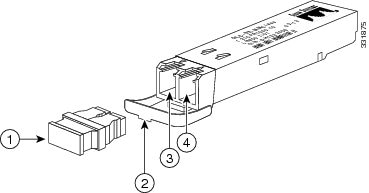 The product numbers and brief description of the SFP and SFP+ transceiver modules are listed in Table 1.


The SFP+ and SFP transceiver module cabling and optical transmit and receive specifications are listed in Table 2 through Table 9.

For the GLC-ZX-SM, the minimum attenuation between the transmit bore (TX) and the receive bore (RX) is 8 dB. When using shorter distances of single-mode fiber cable, you might need to insert an inline optical attenuator in the link to avoid overloading the receiver.

Safety warnings appear throughout this publication in procedures that may harm you if performed incorrectly or are ignored. A warning symbol precedes each warning statement.

You will need these tools to install the SFP transceiver module:

Antistatic mat or antistatic foam to set the transceiver on.

Fiber-optic end-face cleaning tools and inspection equipment. For complete information on inspecting and cleaning fiber-optic connections, see the white-paper document at this URL:

Figure 6 shows an SFP transceiver module that has a bail clasp latch.

Figure 7 shows an SFP+ transceiver module that has a bail clasp latch.

Determine which type of latch your SFP transceiver module uses before following the installation and removal procedures. 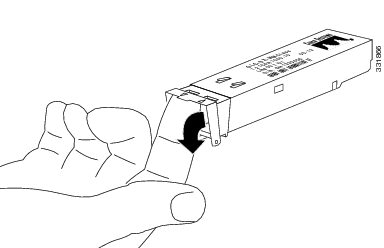 To install an SFP transceiver module, follow these steps:

Attach an ESD-preventive wrist strap to your wrist and to the ESD ground connector or a bare metal surface on your chassis.

Remove the SFP transceiver module from its protective packaging.

Do not remove the optical bore dust plugs until directed to do so later in the procedure.

Check the label on the SFP transceiver module body to verify that you have the correct model for your network.

Find the send (TX) and receive (RX) markings that identify the top side of the SFP transceiver module.

Position the SFP transceiver module in front of the socket opening.

Holding it as shown in Figure 8, insert the SFP into the socket until you feel the connector latch into place.

Figure 8 Inserting an SFP Transceiver Module into a Module Socket

Press the SFP into the slot firmly with your thumb as shown in Figure 9. 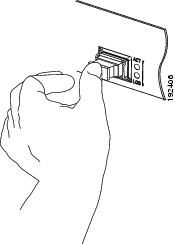 To verify that the SFP is seated and latched properly:

Grasp the SFP as shown in Figure 10 and try to remove it without releasing the latch.

If the SFP can not be removed, it is installed and seated properly. If the SFP can be removed, reinsert it and press harder with your thumb, repeating if necessary until it is latched securely into the socket. 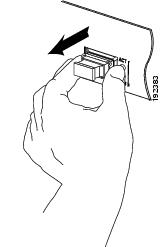 For optical SFP transceiver modules, before removing the dust plugs and making any optical connections, observe the following guidelines:

Always keep the protective dust plugs on the unplugged fiber-optic cable connectors and the transceiver optical bores until you are ready to make a connection.

Always inspect and clean the LC connector end-faces just before making any connections. See the Tip on this page for a pointer to a fiber-optic inspection and cleaning white paper.

Always grasp the LC connector housing to plug or unplug a fiber-optic cable.

Inspect and clean the LC connector's fiber-optic end-faces. See the following Tip for a pointer to a fiber-optic inspection and cleaning white paper.

For complete information on inspecting and cleaning fiber-optic connections, see the white-paper document at this URL:

To connect 1000BASE-T SFP transceiver modules to a copper network, follow these substeps:

To comply with GR-1089 intrabuilding lightning immunity requirements, you must use grounded, shielded, twisted-pair Category 5 cabling.

Insert the other end of the network cable into an RJ-45 connector on a 1000BASE-T-compatible target device.

The LED turns green when the SFP transceiver module and the target device have an established link.

The LED turns amber while the STP feature discovers the network topology and searches for loops. This process takes about 30 seconds, and then the LED turns green.

Reconfigure and reboot the target device if necessary.

Be careful when removing GLC-GE-100FX SFPs from a WS-C3750G-12S-S switch. The SFP transceiver module temperature might go over 160°F (70°C) and be too hot to touch with bare hands.

If you are removing an SFP or SFP+ transceiver module, follow these steps:

Attach an ESD-preventive wrist strap to your wrist and to the ESD ground connector or a bare metal surface on your chassis.

For reattachment of fiber-optic cables, note which connector plug is send (TX) and which is receive (RX).

Release and remove the transceiver module from the socket connector, as shown in Figure 11, Figure 12, Figure 13, or 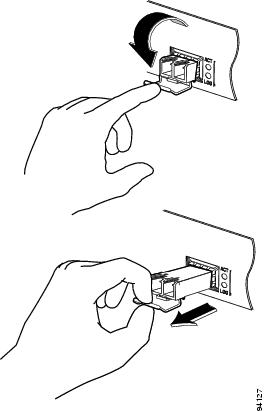 Place the removed transceiver module in an antistatic bag or other protective environment.

Standards and Compliance Specifications for SFP and SFP+ Optical Transceivers

This section provides compliance information for the SFP and SFP+ optical transceivers.

Turn the television or radio antenna until the interference stops.

Move the equipment to one side or the other of the television or radio.

Move the equipment farther away from the television or radio.

Modifications to this product not authorized by Cisco Systems could void the FCC approval and negate your authority to operate the product.

This section repeats in multiple languages the basic warnings that appear in this document.