Transferring and installing patches on CMX 10.6 and above

This article will explain how to transfer and install various patches on CMX 10.6 and above. Patch installation is commonly needed to fix certain bugs (like CSCvp92122

) or to gain root access (usually needed for advanced TAC troubleshooting) which was removed starting with 10.6.0 due to FIPS/CC/UCAPL compliance. In order to obtain the patches, you must open a case Cisco TAC.

Transfer a file to CMX

File transferring to CMX will be done using SCP. It requires port 22 to be allowed between CMX and the machine that the file will be transferred from. Windows users can GUI based tools like WinSCP, while MacOS and most Linux distributions support SCP natively.

Open WinSCP, set protocol to SCP and specify IP address and credentials of the CMX: 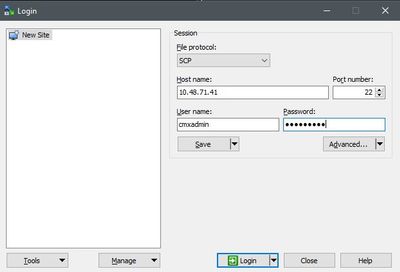 Once logged in, drag and drop the CMX patch file from left to right side:

Note: Once you SCP into the CMX, you will not be able to navigate through the folders as command "cd" is restricted for cmxadmin user, causing the following error to pop up:

From terminal, run the following command:

Starting CMX 10.6.3, there is an additional step that needs to be taken while installing the patch. Once the "cmxos patch install" command is initiated and the filename of the root patch for 10.6.3 is entered, you will be prompted to enter the root password. This is because the version 10.6.3 does not ask the user to enter the root password during the initial deployment of the CMX like in earlier releases.

In case of High Availability

Patches install only on the appliance you install them on and are not automatically rolled over to the secondary appliance. It is advised to install feature patches (patches fixing a specific feature or issue) on both appliances at the same time to avoid replication issues.

A root patch is fine to install only on one appliance though as it touches things that do not pertain to replication. There is no need to actually break the HA configuration/pairing, unless the patch you are installing is fixing HA issues.