This document describes Software Defined Networking (SDN) as a new approach to networking, complementing traditional network architectures. The original definition of SDN is tied to OpenFlow.

Here are the key goals for OpenFlow SDN.

This is the Faucet OpenFlow controller: 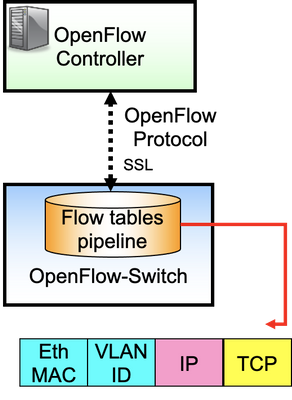 OpenFlow is the protocol between the controller (control plane) and the ethernet switch (data plane). The switch has flow tables arranged into a pipeline and the flows are rules to examine the packets.

Note: While there are no feature dependencies, the switch needs to be booted up in OpenFlow mode. Available Platforms in OpenFlow mode, Catalyst 9000 series switches - 9300/9400/9500/9500-H

The same image for normal and OpenFlow operation is used.

The switch should be in OpenFlow mode.

Verify that the switch is in Openflow mode.

There are a total of 8 controllers supported today!

Controller-side debugging is out of the scope of this document.

Not all of your usual platform CLIs are supported on the Openflow switch. Choose and use only allowed CLIs for your debugging scenario.

Please refer to this config-guide for any other commands and references: https://www.cisco.com/c/en/us/td/docs/ios-xml/ios/prog/configuration/174/b_174_programmability_cg/openflow.html#id_76495