The Smart Network Application (SNA) system displays an overview of the network topology including detailed monitoring information for devices and traffic. SNA enables viewing and modifying of configurations globally on all supported devices in the network.

The topology discovery mechanism uses information gathered from Link Layer Discovery Protocol (LLDP) and Cisco Discovery Protocol (CDP) Threshold Limit Values (TLVs) to identify the devices in the network. In order to maximize the information provided in the topology, all devices in the network that support these protocols should have them enabled.

This article explains the topology view of the SNA, which is its main view. 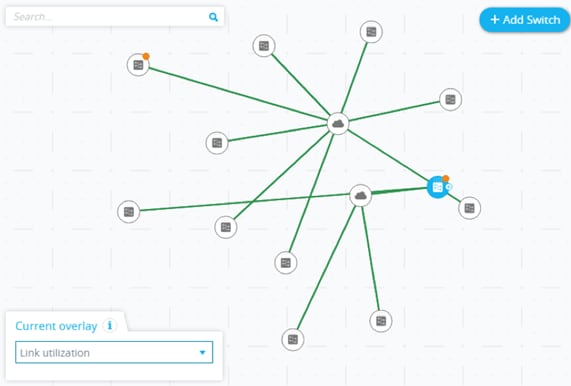 – Switches which support CDP or LLDP

– Other elements which support CDP or LLDP

– Partial SNA switches — A switch that can be accessed remotely by starting a management session through an SNA switch. This does not provide discovery, services explorers, or the full SNA feature set.

– Unmanaged switches — A switch that cannot be accessed through SNA.

– Switches will appear as Offline Switches.

– Other devices will be removed completely from topology view.

The Topology view displays the following types of entities:

– IP Address (A list if more than one is discovered)

– MAC Address (A list if more than one is discovered)

– Number of Notifications — The number of notifications is indicated by a number in orange on the device icon. The actual notifications are displayed in the right-hand information panel.

Some devices (particularly SNA-capable devices) have additional information, such as individual port information. This information can be viewed by clicking on their icon and displaying a device explorer screen for the device.

Devices in the network are separated into the following categories:

An SNA-capable device or a managed device remains detected as long as it is connected to the network by the same IP address it used previously.

Offline devices have the following characteristics:

– Distinct visual appearance from online devices on the topology map.

– Can be moved on the topology, and its placement can be saved. You can also add tags to the device.

– Can be manually removed. After a device is removed, it no longer appears on the topology map until it is detected or added manually. All tags associated with this device are lost, and is not restored even if the device is detected again in the future.

SNA periodically attempts to connect to offline devices to verify if a managed or an SNA switch has come back online. During these attempts, an indication is displayed on the device.

If a device has one or more client devices attached to it, a + appears on it and you can click on the + to display the clients.

The following connection widths are available, from narrowest to widest:

Links whose capacity cannot be calculated or links between a backbone device and its clients are shown as level 1 links.

You can enter a connection explorer for specific links by clicking on the link. The following information is displayed:

– Port names on the two sides of the link (if known).

– Link bandwidth for each link comprising the connection.

SNA may determine that more than one device is connected to the network through a specific port, but is unable to map the relationship between those devices. This occurs because there are no SNA-capable devices among them. SNA draws a cloud on the topology map and displays the devices detected in this cloud as connected clients.

Note: Most SNA operations are not applicable to clouds.