This article provides instructions on how to configure MAC-Based groups on a switch. 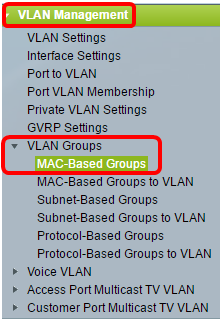 The available menu options may vary depending on the device model.

Step 5. Click the radio button that corresponds to the method you want to use to define the Prefix Mask. The prefix mask looks at a certain number of bits and then assigns the MAC address to a VLAN group.

In this example, Length is chosen and 12 is used.

Step 6. In the Group ID field, enter an ID to identify the MAC-Based VLAN group.

In this example, 5 is used.

You should now have added a MAC-Based VLAN group on your switch.

Step 4. (Optional) Click Save to save settings to the startup configuration file.

The MAC-Based VLAN group should now be deleted from your switch.

You should now have configured MAC-Based VLAN groups on your switch. To learn how to map MAC-Based groups to VLAN, click here for instructions.