A Virtual Private Network (VPN) exists as a technology widely used to connect remote networks to a main private network, simulating a private link in the form of an encrypted channel over public lines. A remote network can connect to a private main network as if it exists as a part of the private main network without security concerns because of a 2-phase negotiation that encrypts the VPN traffic in a way that only the VPN endpoints know how to decrypt it.
This short guide provides an example design for building a site-to-site IPsec VPN tunnel between a Cisco 500 Series Integrated Services Adapter and a Cisco RV Series Router. 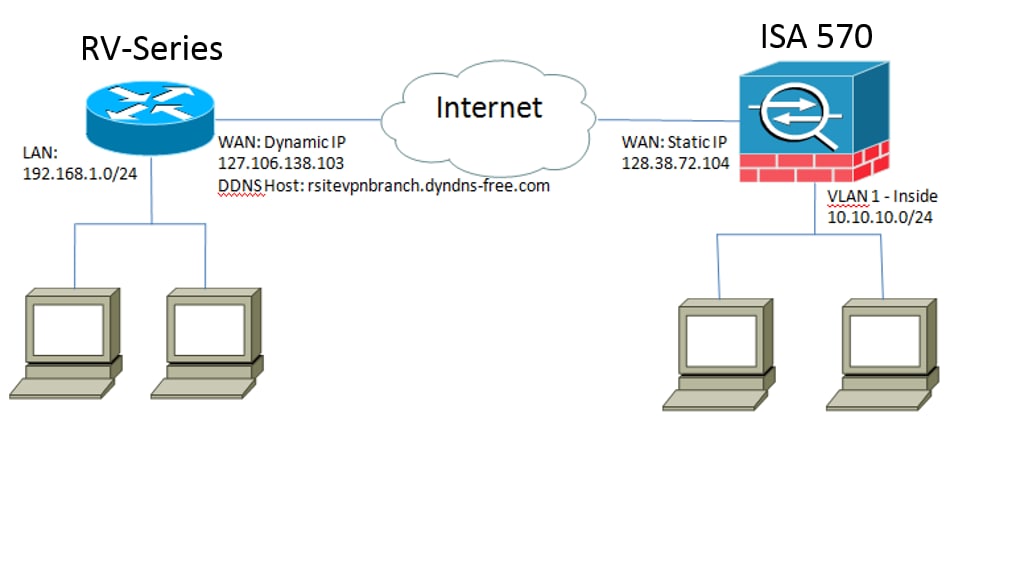 Internet Key Exchange (IKE) is the protocol used to set up a security association (SA) in the IPsec protocol suite. IKE builds on the Oakley protocol, Internet Security Association, and Key Management Protocol (ISAKMP), and uses a Diffie-Hellman key exchange to set up a shared session secret, from which cryptographic keys are derived.

Internet Security Association and Key Management Protocol (ISAKMP) is used to negotiate the VPN tunnel between two VPN endpoints. It defines the procedures for authentication, communication, and key generation, and is used by the IKE protocol to exchange encryption keys and establish the secure connection.

IP Security Protocol (IPsec) is a protocol suite for securing IP communications by authenticating and encrypting each IP packet of a data stream. IPsec also includes protocols for establishing mutual authentication between agents at the beginning of the session and negotiation of cryptographic keys to be used during the session.  IPsec can be used to protect data flows between a pair of hosts, gateways, or networks.

VPN topology — A point-to-point VPN topology means a secured IPsec tunnel is configured between the main site and the remote site.
Businesses often require multiple remote sites in a multi-site topology, and implement either a hub-and-spoke VPN topology or full mesh VPN topology. A hub-and-spoke VPN topology means that remote sites do not require communication with other remote sites, and each remote site only establishes a secured IPsec tunnel with the main site. A full mesh VPN topology means that remote sites require communication with other remote sites, and each remote site establishes a secured IPsec tunntel with the main site and all other remote sites.
VPN Authentication — The IKE protocol is used to authenticate VPN peers when establishing a VPN tunnel. Various IKE authentication methods exist, and pre-shared key is the most convenient method. Cisco recommends applying a strong pre-shared key.
VPN Encryption — To ensure confidentiality of data transported over the VPN, encryption algorithms are used to encrypt the payload of IP packets. DES, 3DES, and AES are three common encryption standards. AES is considered the most secure when compared to DES and 3DES. Cisco highly recommends applying AES-128 bits or higher encryption (e.g., AES-192 and AES-256). However, stronger encryption algorithms require more processing resources from a router.
Dynamic WAN IP Addressing and Dynamic Domain Name Service (DDNS) — The VPN tunnel needs to be established between two public IP addresses. If the WAN routers receive static IP addresses from the Internet Service Provider (ISP), the VPN tunnel can be implemented directly using static public IP addresses. However, most small businesses use cost-effective broadband Internet services such as DSL or cable, and receive dynamic IP addresses from their ISPs. In such cases, Dynamic Domain Name Service (DDNS) can be used to map the dynamic IP address to a fully qualified domain name (FQDN).
LAN IP Addressing — The private LAN IP network address of each site should have no overlaps. The default LAN IP network address at each remote site should always be changed. 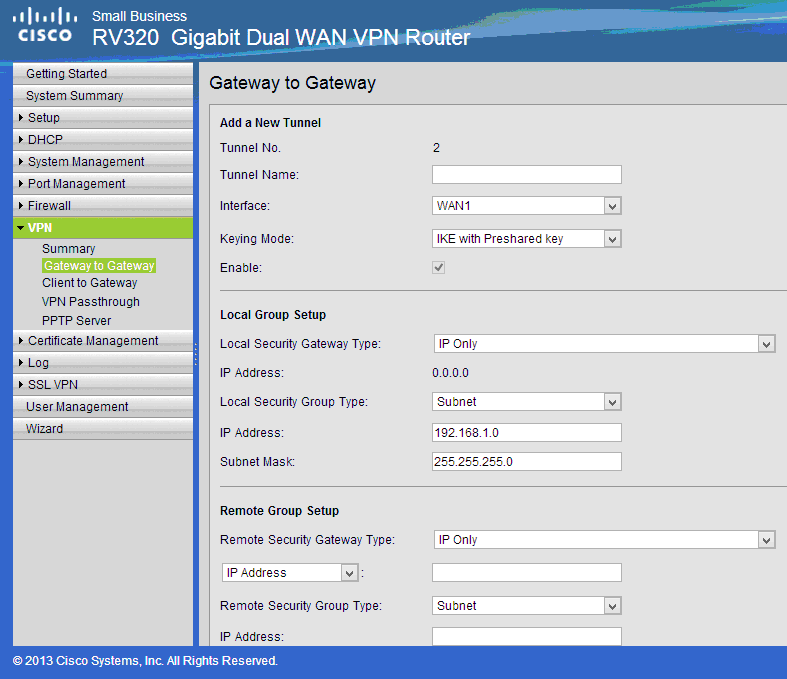 Step 2. Set up IPSec Tunnel Settings (see picture)
a.) Set Encryption to 3DES.
b.) Set Authentication to SHA1.
c.) Check Perfect Forward Secrecy.
d.) Set up the Preshared Key (needs to be the same on both routers).
The following shows IPSec Setup (Phase 1 and 2): 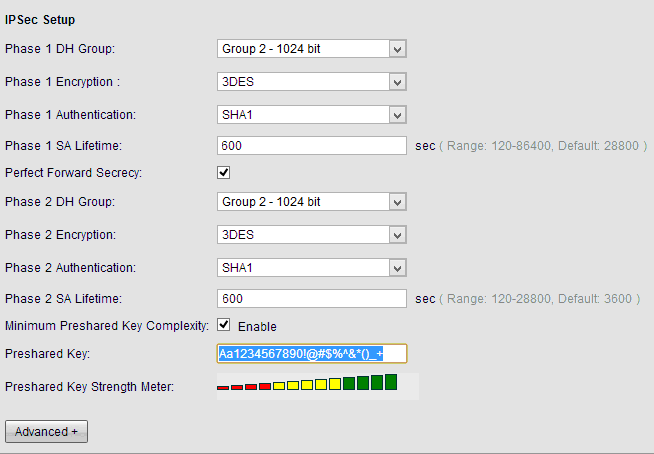 Note: Keep in mind that IPsec Tunnel Settings on both sides of the site-to-site IPsec VPN tunnel must match. If any discrepancies exist between the IPsec Tunnel Settings of the RV320 and the ISA570, both devices will fail to negotiate the encryption key and fail to connect.
Step 3. Click Save to complete the configuration. 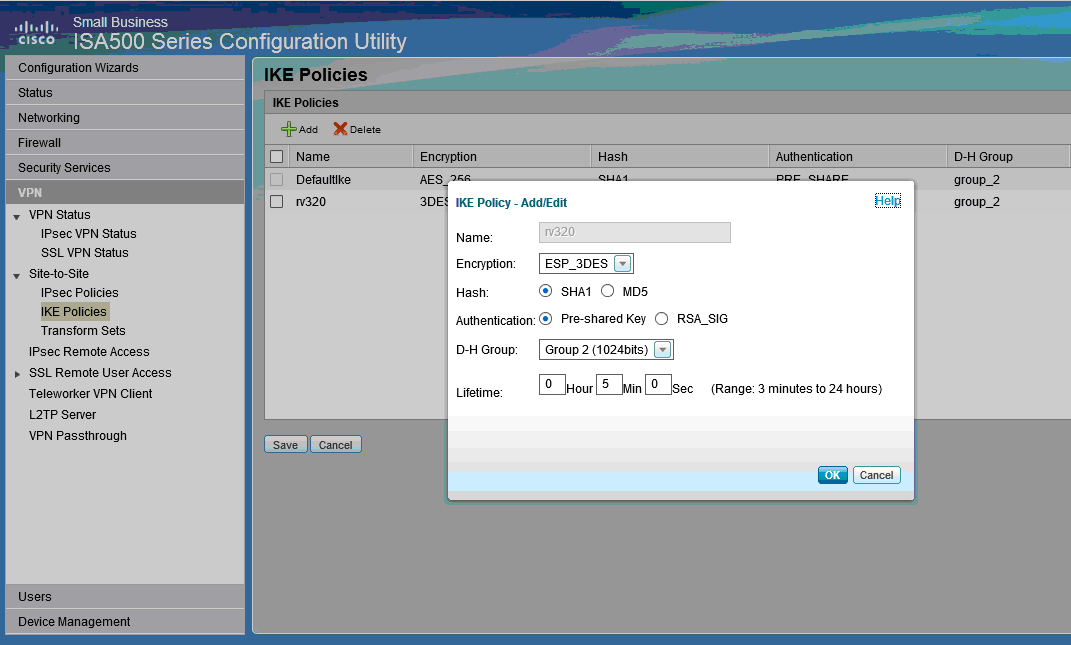 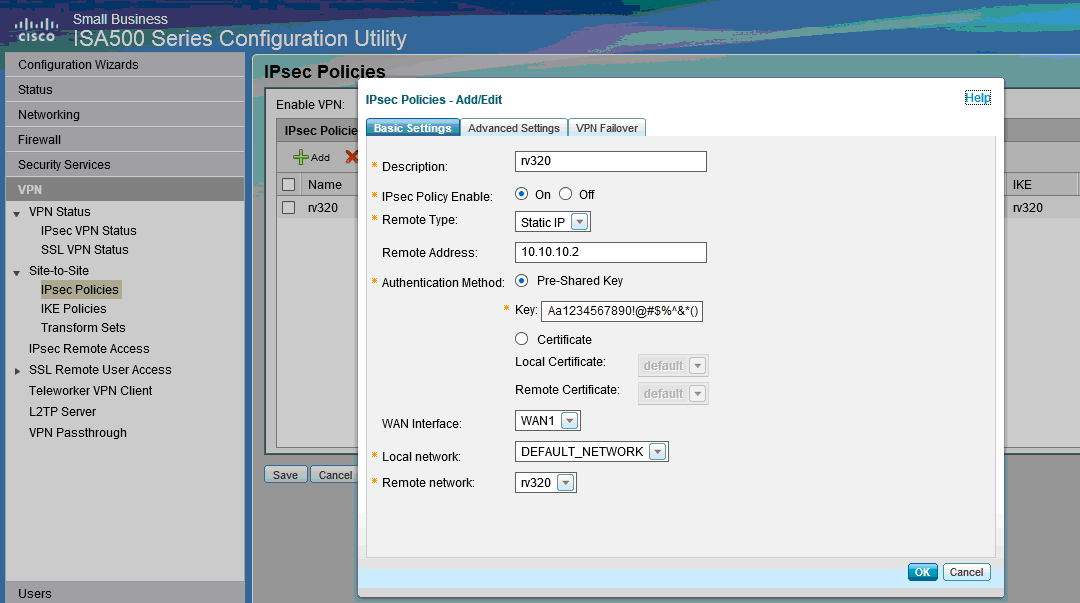 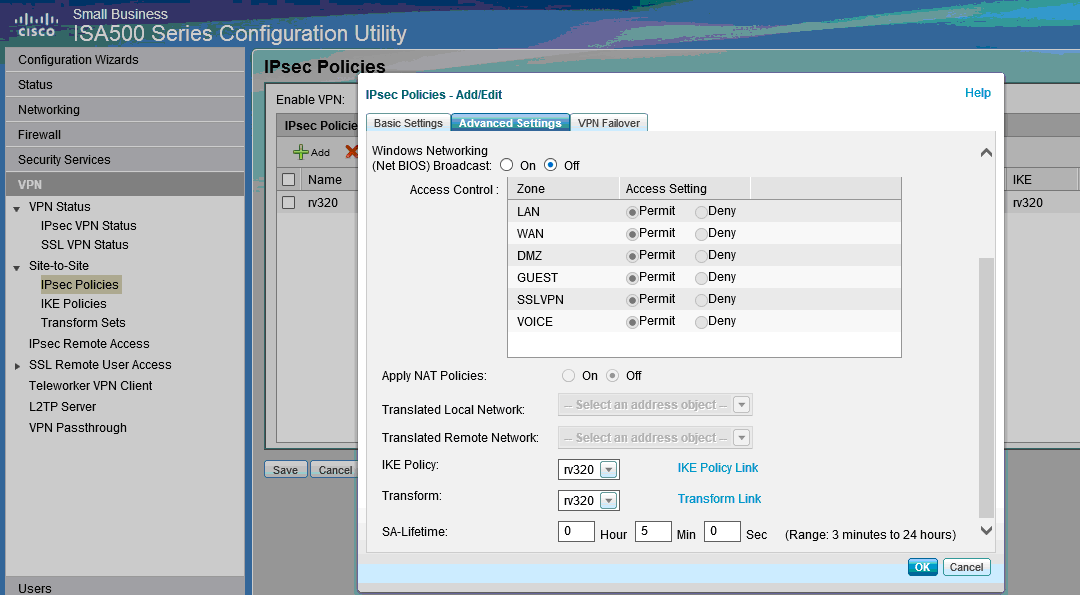