A VPN Passthrough is a way to connect two secured networks over the internet. When VPN passthrough is enabled on the network it allows the VPN traffic that is initiated from VPN client to pass through to the Internet and allows the VPN connection to succeed.

Note: No ports need opening to enable VPN passthrough, it will automatically work. Before the VPN passthrough can be configured the basic VPN setup must be done on the host and the remote side. To configure VPN refer to the article Basic VPN Setup on RV215W.

This article explains how to configure VPN Passthrough on RV215W. 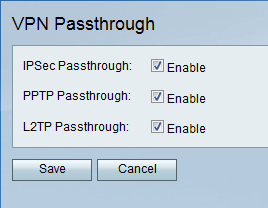 • IPSec Passthrough — Uses NAT-T which combines the IPSec packets in a UDP packet which works with NAT.

• PPTP Passthrough — Used in the router by replacing GRE (which does not work with NAT) with enhanced GRE that works with NAT.

• L2TP Passthrough —  Uses NAT-T which combines the IPSec packets in a UDP packet which works with NAT. Layer 2 Tunneling Protocol (L2TP) is a method used to enable Point-to-Point sessions via the Internet on the Layer 2 level.

Step 3. (Optional) If any of the VPN Passthrough needs to be disabled, uncheck the appropriate check box.