This document describes the Cisco AnyConnect Mobility Client captive portal detection feature and the requirements for it to function correctly. Many wireless hotspots at hotels, restaurants, airports, and other public places use captive portals in order to block user access to the Internet. They redirect HTTP requests to their own websites that require users to enter their credentials or acknowledge terms and conditions of the hotspot host.

Cisco recommends that you have knowledge of the Cisco AnyConnect Secure Mobility Client.

Many facilities that offer Wi-Fi and wired access, such as airports, coffee shops, and hotels, require users to pay before they obtain access, agree to abide by an acceptable use policy, or both. These facilities use a technique called captive portal in order to prevent applications from connecting until users open a browser and accept the conditions for access.

Support for both captive portal detection and remediation requires one of these licenses:

You can use a Cisco AnyConnect Secure Mobility license in order to provide support for captive portal detection and remediation in combination with either an AnyConnect Essentials or an AnyConnect Premium license.

Note: Captive portal detection and remediation is supported on the Microsoft Windows and Macintosh OS X operating systems supported by the release of AnyConnect that is in use.

AnyConnect displays the Unable to contact VPN server message on the GUI if it cannot connect, regardless of the cause. The VPN server specifies the secure gateway. If Always-on is enabled and a captive portal is not present, the client continues to attempt to connect to the VPN and updates the status message accordingly.

If the Always-on VPN is enabled, the connect failure policy is closed, captive portal remediation is disabled, and AnyConnect detects the presence of a captive portal, then the AnyConnect GUI displays this message once per connection and once per reconnect:

If AnyConnect detects the presence of a captive portal and the AnyConnect configuration differs from that previously described, the AnyConnect GUI displays this message once per connection and once per reconnect:

Captive portal remediation is the process where you satisfy the requirements of a captive portal hotspot in order to obtain network access.

AnyConnect does not remediate the captive portal; it relies on the end user to perform the remediation.

In order to perform the captive portal remediation, the end user meets the requirements of the hotspot provider. These requirements might include payment of a fee to access the network, a signature on an acceptable use policy, both, or some other requirement that is defined by the provider.

AnyConnect can falsely assume it is in a captive portal in these situations.

This section describes how the AnyConnect behaves.

When you attempt an Internet Key Exchange Version 2 (IKEv2) connection to an ASA with SSL authentication disabled that runs the Adaptive Security Device Manager (ASDM) portal on port 443, the HTTPS probe performed for captive portal detection results in a redirect to the ASDM portal (/admin/public/index.html). Since this is not expected by the client, it looks like a captive portal redirect, and the connection attempt is prevented since it seems that captive portal remediation is required.

If you encounter this issue, here are some workarounds:

Caution: The same problem exists for Cisco IOS® routers. If ip http server is enabled on Cisco IOS, which is required if the same box is used as the PKI Server, AnyConnect falsely detects captive portal. The workaround is to use ip http access-class in order to stop responses to AnyConnect HTTP requests, instead of requesting authentication.

It is possible to disable the captive portal feature in AnyConnect client version 4.2.00096 and later (see Cisco bug ID  CSCud97386). The administrator can determine if the option should be user configurable or disabled. This option is available under the Preferences (Part 1) section in the profile editor. The administrator can choose Disable Captive Portal Detection or User Controllable as shown in this profile editor snapshot: 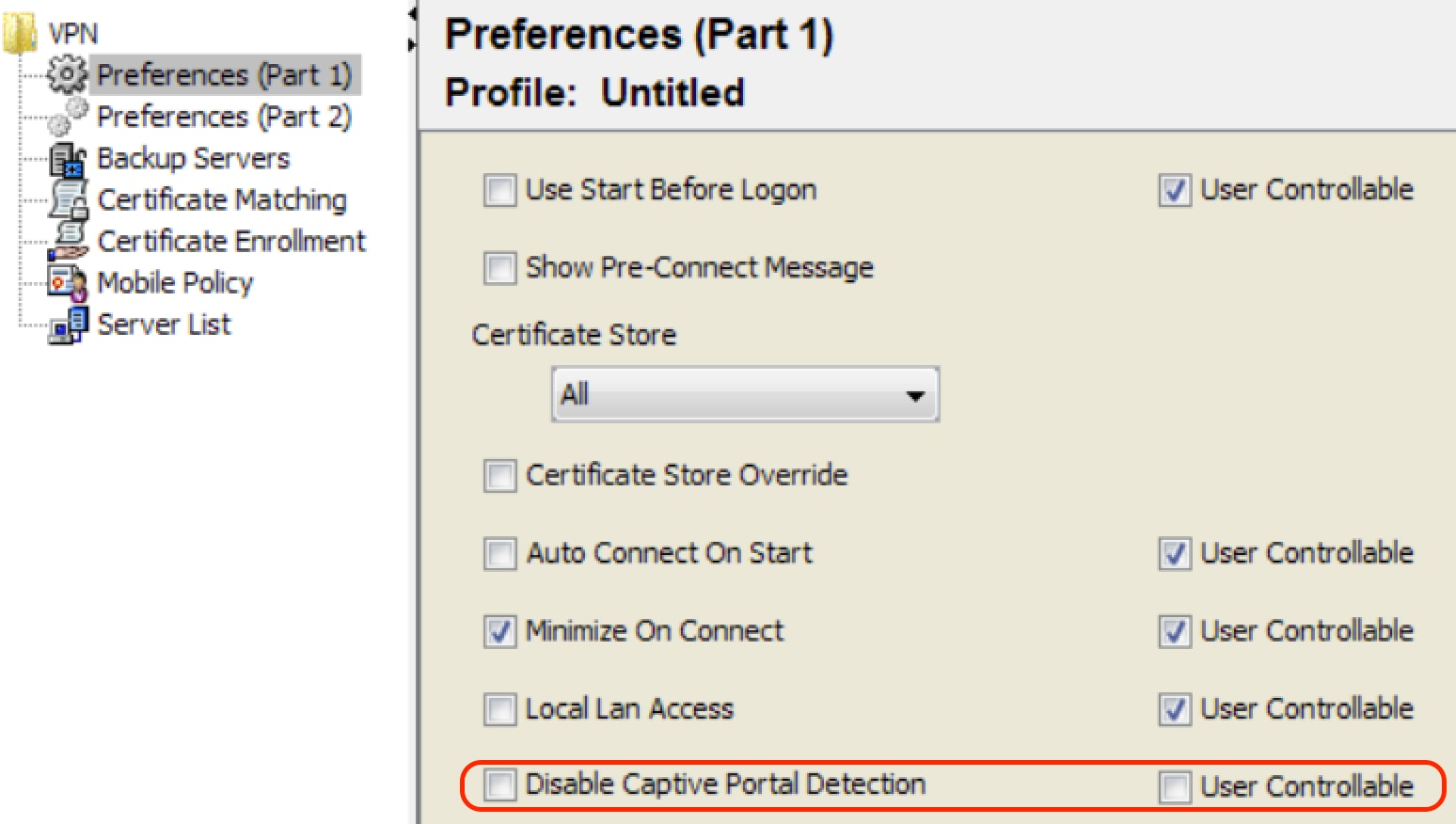 If User controllable is checked, the checkbox appears on the Preferences tab of the AnyConnect Secure Mobility Client UI as shown here: 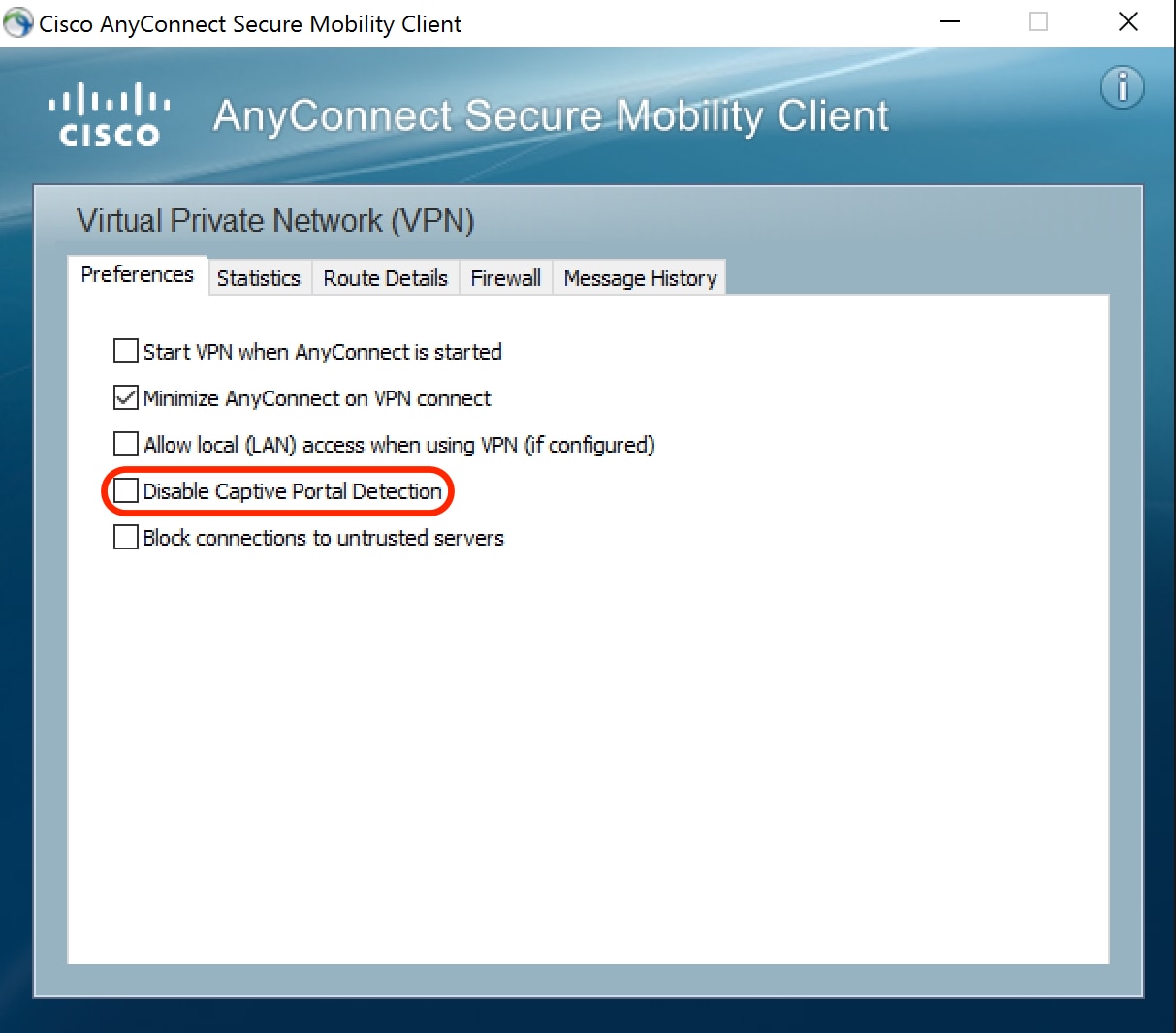