This document describes the basic concepts of Secure Sockets Layer (SSL) protocol, and provides a sample transaction and packet capture.

The basic unit of data in SSL is a record. Each record consists of a five-byte record header, followed by data.

There are four record types in SSL:

The record version is a 16-bits value and is formatted in network order.

The record length is a 16-byte value and is formatted in network order.

In theory, this means that a single record can be up to 65,535 (2^16 -1) bytes in length. The TLSv1 RFC2246 states that the maximum length is 16,383 (2^14 -1) bytes. Microsoft products (Microsoft Internet Explorer and Internet Information Services) are known to exceed these limits.

This section describes the four types of SSL records.

Handshake records contain a set of messages that are used in order to handshake. These are the messages and their values:

In the simple case, handshake records are not encrypted. However, a handshake record that contains a finished message is always encrypted, as it always occurs after a Change Cipher Spec (CCS) record.

CCS records are used in order to indicate a change in cryptographic ciphers. Immediately after the CCS record, all data is encrypted with the new cipher. CCS records might or might not be encrypted; in a simple connection with a single handshake, the CCS record is not encrypted.

Alert records are used in order to indicate to the peer that a condition has occured. Some alerts are warnings, while others are fatal and cause the connection to fail. Alerts might or might not be encrypted, and might occur during a handshake or during data transfer. There are two types of alerts:

These records contain the actual application data. These messages are carried by the record layer and are fragmented, compressed, and encrypted, based on the current connection state.

This section describes a sample transaction between the client and server. 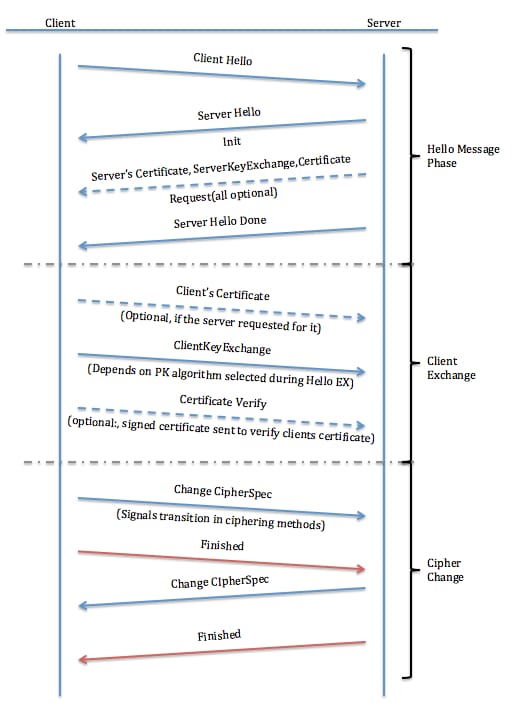 When an SSL client and server begin to communicate, they agree on a protocol version, select cryptographic algorithms, optionally authenticate each other, and use public key encryption techniques in order to generate shared secrets. These processes are performed in the handshake protocol. In summary, the client sends a Client Hello message to the server, which must respond with a Server Hello message or a fatal error occurs and the connection fails. The Client Hello and Server Hello are used to establish security enhancement capabilities between the client and server.

The Client Hello sends these attributes to the server:

The server sends back these attributes to the client:

This is the first message that the client sends after he/she receives a Server Hello Done message. This message is only sent if the server requests a certificate. If no suitable certificate is available, the client sends a no_certificate alert instead. This alert is only a warning; however, the server might respond with a fatal handshake failure alert if client authentication is required. Client DH certificates must match the server specified DH parameters.

If the client sends a certificate with signing ability, a digitally-signed Certificate Verify message is sent in order to explicitly verify the certificate.