This document describes how to configure the Network Address Translation (NAT) on a Cisco router.

This document requires a basic knowledge of the terms used in connection with NAT.

Note: In this document, when the internet, or an internet device is referred to, it means a device on any external network.

When you configure NAT, it is sometimes difficult to know where to begin, especially if you are new to NAT. These steps guide you to define what you want NAT to do and how to configure it:

Each of these NAT examples guides you through steps 1 through 3 of the Quick Start Steps in the previous image. These examples describe some common scenarios in which Cisco recommends you deploy NAT.

Define NAT Inside and Outside Interfaces

The first step to deploy NAT is to define NAT inside and outside interfaces. You can find it easiest to define your internal network as inside, and the external network as outside. However, the terms internal and external are subject to arbitration as well. This figure shows an example of this. 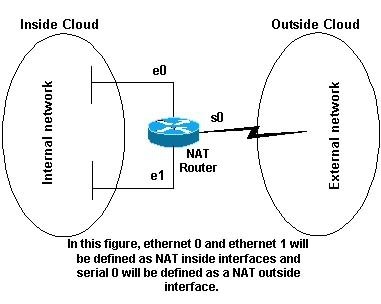 This figure shows a simple network diagram with the router interfaces defined as inside and outside. 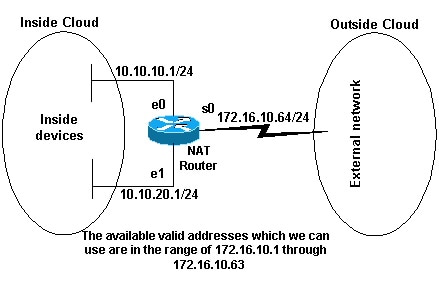 In this example, you want NAT to allow certain devices (the first 31 from each subnet) on the inside to originate communication with devices on the outside and translates their invalid address to a valid address or pool of addresses. The pool has been defined as the range of addresses 172.16.10.1 through 172.16.10.63.

Configure NAT to Allow Internal Users to Access the Internet

Note: Cisco highly recommends that you do not configure access lists referenced by NAT commands withpermit any. If you use permit any in NAT, it consumes too many router resources which can cause network problems.

The final step is to verify that NAT is operates as intended .

Notice in the previous second configuration, the NAT pool ovrld only has a range of one address. The keyword overload used in the ip nat inside source list 7 pool ovrld overload command allows NAT to translate multiple inside devices to the single address in the pool.

Another variation of this command is ip nat inside source list 7 interface serial 0 overload , which configures NAT to overload on the address that is assigned to the serial 0 interface.

When overloading  is configured, the router maintains enough information from higher-level protocols (for example, TCP or UDP port numbers) to translate the global address back to the correct local address. For definitions of global and local address, refer to NAT: Global and Local Definitions .

The final step is to verify that NAT is operates as intended .

Configure NAT to Allow the Internet to Access Internal Devices

In this example, you first define the NAT inside and outside interfaces, as shown in the previous network diagram.

The third step is to configure NAT. To accomplish what you have defined, you can configure static and dynamic NAT together. For more information on how to configure this example, refer to Configure Static and Dynamic NAT Simultaneously . The final step is to verify that NAT operates as intended .

3. Redirect TCP Traffic to Another TCP Port or Address

After you define the interfaces as shown in the previous network diagram, you can decide that you want NAT to redirect packets from the outside destined for 172.16.10.8:80 to 172.16.10.8:8080. You can use a static nat command in order to translate the TCP port number to achieve this. A sample configuration is shown here.

The final step is to verify that NAT operates as intended .

4. Use NAT For a Network Transition

NAT is useful when you need to readdress devices on the network or when you replace one device with another. For instance, if all devices in the network use a particular server and this server needs to be replaced with a new one that has a new IP address, the reconfiguration of all the network devices to use the new server address takes some time. In the meantime, you can use NAT in order to configure the devices with the old address to translate their packets to communicate with the new server. 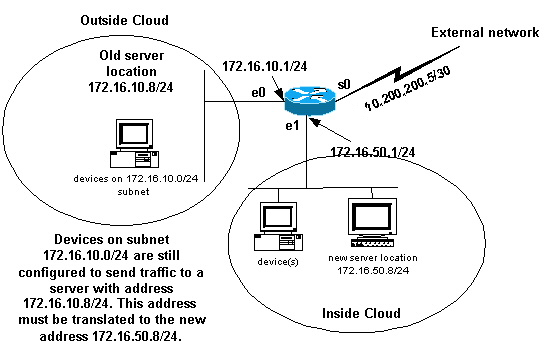 Once you have defined the NAT interfaces as the previous image illustrates, you can decide that you want NAT to allow packets from the outside destined for the old server address (172.16.10.8) to be translated and sent to the new server address. Note that the new server is on another LAN, and devices on this LAN or any devices reachable through this LAN (devices on the inside part of the network), must be configured to use the new server IP address if possible.

You can use static NAT to accomplish what you need. This is a sample configuration.

Configure NAT for Use Through a Network Transition

The final step is to verify that NAT operates as intended .

5. Use NAT for Networks that Overlap

Networks that overlap result when you assign IP addresses to internal devices that are already used by other devices within the internet. These networks also result when two companies, both of whom use RFC 1918 IP addresses in their networks, merge. These two networks need to communicate, preferably without all of their devices readdressed.

Difference between One-to-One and Many-to-Many Mapping

A static NAT configuration creates a one-to-one mapping and translates a specific address to another address. This type of configuration creates a permanent entry in the NAT table as long as the configuration is present and enables both inside and outside hosts to initiate a connection. This is mostly useful for hosts that provide application services like mail, web, FTP and so forth. For example:

Dynamic NAT is useful when fewer addresses are available than the actual number of hosts to be translated. It creates an entry in the NAT table when the host initiates a connection and establishes a one-to-one mapping between the addresses. But, the mapping can vary and it depends upon the registered address available in the pool at the time of the communication. Dynamic NAT allows sessions to be initiated only from inside or outside networks for which it is configured. Dynamic NAT entries are removed from the translation table if the host does not communicate for a specific period of time which is configurable. The address is then returned to the pool for use by another host.

For example, complete these steps of the detailed configuration:

Once you have configured NAT, verify that it operates as expected. You can do this in a number of ways: with a network analyzer, show commands, or debug commands. For a detailed example of NAT verification, refer to Verify NAT Operation and Basic NAT .

The examples in this document demonstrate quick start steps can help you configure and deploy NAT.

These quick start steps include: