Cisco provides scalable data center network solutions for customers today to automate their hybrid-cloud interconnects and extend multitenancy and network segmentation designs between multiple on-premises data centers and AWS regions. With the addition of AWS Outposts to the AWS product offering, Cisco customers now can use Cisco’s hybrid-cloud solution to easily connect AWS Outposts instances to their existing fabrics and leverage consistent policy-driven automation to connect workloads residing on premises and/or in the AWS cloud.

Cisco customers have deployed Cisco Nexus® 9000–based data-center fabrics widely over the last five years, taking advantage of Cisco innovations in network automation, security, and assurance. As their adoption of hybrid-cloud strategy accelerates, customers demand more flexibility to deploy application workloads on premises or in the AWS cloud while being able to access IT resources on either side. Three key requirements need to be addressed:

With the advent of AWS Outpost, customers now have the flexibility to extend Cisco data-center networking solutions to AWS Outposts in two modes:

AWS Outposts will be connected to the customer’s data-center network. While Outposts itself are fully managed by AWS, easy connectivity and integration with the on-premises network is the key for successful deployment and operation of AWS Outposts. Cisco provides our customers such an easy solution to connect AWS Outposts to their on-premises Cisco Nexus networks in either NX-OS or ACI mode. If ACI is the operational model of choice, our customers will also be able to extend the benefits of the Cloud ACI solution to AWS Outposts so that they can use a consistent policy model to manage the network connectivity to the AWS cloud, to AWS Outposts, and across their data centers.

Each Outpost Network Device establishes two BGP sessions with the customer data-center network, one for the service link datapath and the other for the local datapath. The service link datapath is to provide the connectivity between the Outpost and its parent AWS region. Therefore, it needs to be part of the Layer-3 routing space that is eventually connected to the external routing domain to reach the AWS region. The local datapath is to provide the internal connectivity between the AWS Outpost and the customer data center. It is recommended to keep these two datapaths in two separate VRFs for better route segmentation and control between the external and internal routing spaces.

When customers choose to deploy and operate their data-center networks with Cisco Nexus 9000 Series Switches in NX-OS mode, they can build a traditional two or three-tier network using the technologies like Spanning Tree Protocol (STP) and Virtual Port Channel (vPC), but a more modern network design is to leverage BGP EVPN to build an IP-based VXLAN overlay data-center fabric. VXLAN EVPN fabrics provide enterprise grade scale, multitenancy, and workload mobility. The remainder of this section discusses the required configurations to deploy AWS Outposts to an on-premises data center in both scenarios.

A traditional three-tier data-center network consists of access, aggregation, and core tiers. The switches on the access tier normally are deployed in vPC pairs to provide redundant connectivity for endhosts and network devices that are connected to the network. The network between the access tier and the aggregation tier can be Layer 2 running STP and vPC, or Layer 3. The network between the aggregation tier and the core tier is normally Layer 3.

Figure 1 shows a three-tier network with the demarcation of Layer 2 and Layer 3 on the access tier. The switches on the access tier are in vPC pairs. It shows two typical connectivity topologies for connecting AWS Outposts to an vPC pair of access switches. In example (a), each AWS Outpost Network Device is connected to both access switches via a vPC port channel. In example (b), each AWS Outpost Network Device is connected to one access switch via a non-vPC port channel. In either example, each AWS Outpost Network Device only runs BGP routing with one access switch in a vPC pair. Although it is recommended to keep the service link datapath and the local datapath in two separate VRFs for better route segmentation and control, multi-VRF routing in a traditional two or three-tier data-center network requires a hop-by-hop VRF-lite routing configuration, which is not a common practice due to its operational complexity. Both examples have the two datapaths in the default VRF. 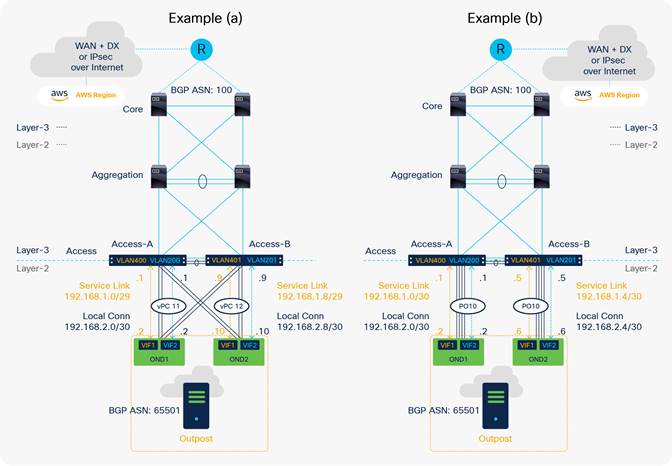 In the examples shown in Figure 1, the following designs are used:

Tables 1 and 2, below, show the relevant configurations for the AWS Outposts deployment on both Access-A and Access-B in example (a) and (b), respectively. It assumes that the vPC configuration between the two switches has been implemented. For a reference on basic vPC configuration, use the following configuration guide: https://www.cisco.com/c/en/us/td/docs/switches/datacenter/nexus9000/sw/6-x/interfaces/configuration/guide/b_Cisco_Nexus_9000_Series_NX-OS_Interfaces_Configuration_Guide/configuring_vpcs.pdf

Figure 2 illustrates a typical topology and design to connect AWS Outposts to an NX-OS VXLAN fabric. The two Outpost Network Devices of an AWS Outpost are connected to two different leaf switches of the on-premises data-center network via LACP port channels. Two Layer-3 subinterfaces are configured, one for the internal local datapath and the other for the service link datapath to the AWS region. They are in two different VRFs. BGP is running between each of the subinterfaces and AWS Outposts. The service link connectivity to the AWS region goes through the existing border-leaf switch that runs dynamic routing with the customer organization network outside of the data-center network to provide external connectivity to WAN or the Internet. 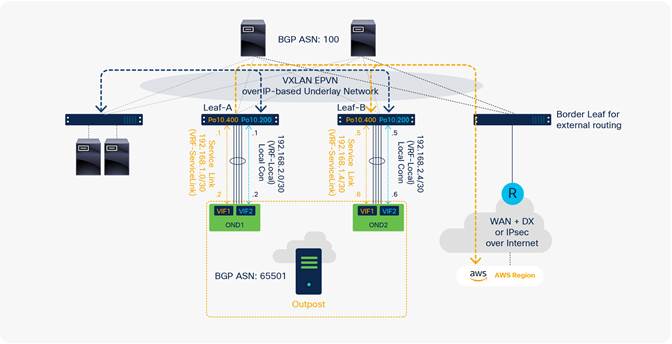 In the example shown in Figure 2, the following design is used:

●     Two VRFs, vrf-local and vrf-servicelink, are created for the local routing and for Outpost service link connectivity to the AWS region, respectively.

●     The port channel 10 is configured on each leaf switch.

●     Subinterface Po10.400 is configured for Layer-3 connectivity with AWS Outpost Network Device VIF1 (IP addresses are indicated in Figure 1) for the service link. It is in vrf-servicelink.

●     Subinterface Po10.200 is configured for Layer-3 connectivity with AWS Outpost Network Device VIF2 (IP addresses are indicated in Figure 2) for local connectivity. It is in vrf-local.

●     The leaf switches are running BGP EVPN as a control protocol.

●     BGP routing between the leaf switches and the AWS Outpost Network Devices runs in the IPv4 unicast address-family in vrf-servicelink and vrf-local, respectively. The BGP-learned VRF routes are advertised into the L2VPN EVN address-family for further propagation to the rest of the network in the corresponding VRF.

The table below shows the required Cisco Nexus 9000 leaf switch configuration for the above design, including the two VRFs, port-channel interface and subinterfaces, and BGP routing with the AWS Outpost Network Devices.

Note:      A detailed explanation of the switch configuration is not in the scope of this document. Refer to the following configuration guide for Cisco Nexus 9000 Series Switch BGP EVPN configuration: https://www.cisco.com/c/en/us/td/docs/switches/datacenter/nexus9000/sw/93x/vxlan/configuration/guide/b-cisco-nexus-9000-series-nx-os-vxlan-configuration-guide-93x.html.

Figure 3 shows the typical topology and design for connecting AWS Outposts to a Cisco ACI fabric network. The physical topology is similar to that of NX-OS VXLAN EVPN fabric, but the Layer-3 subinterfaces and BGP routing are provisioned as part of an L3Out on the ACI fabric. In the example shown in Figure 3, the following two L3Out objects are defined, one for the AWS Outposts local datapath, and the other for the AWS Outposts service link datapath. They are in VRF op-local and VRF op-servicelink, respectively. The configuration is centrally defined on the Application Policy Infrastructure Controller (APIC). 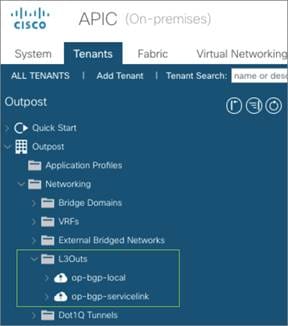 Figure 4 shows the steps to configure the L3Out op-bgp-servicelink on APIC GUI. 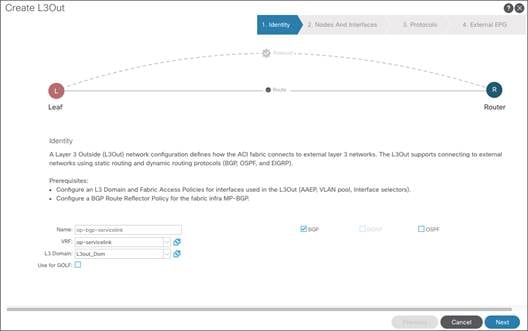 Figure 5 shows the steps to configure the L3Out op-bgp-local on APIC GUI. 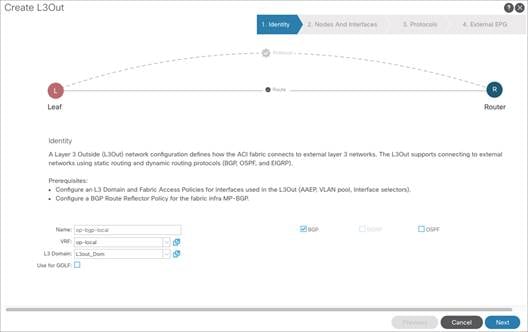 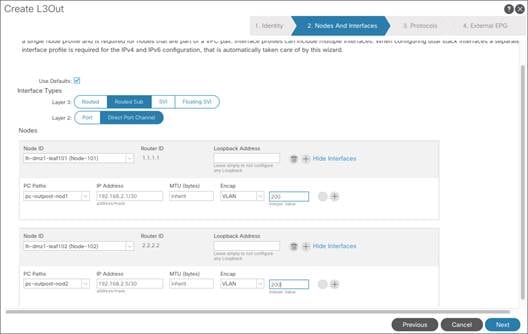 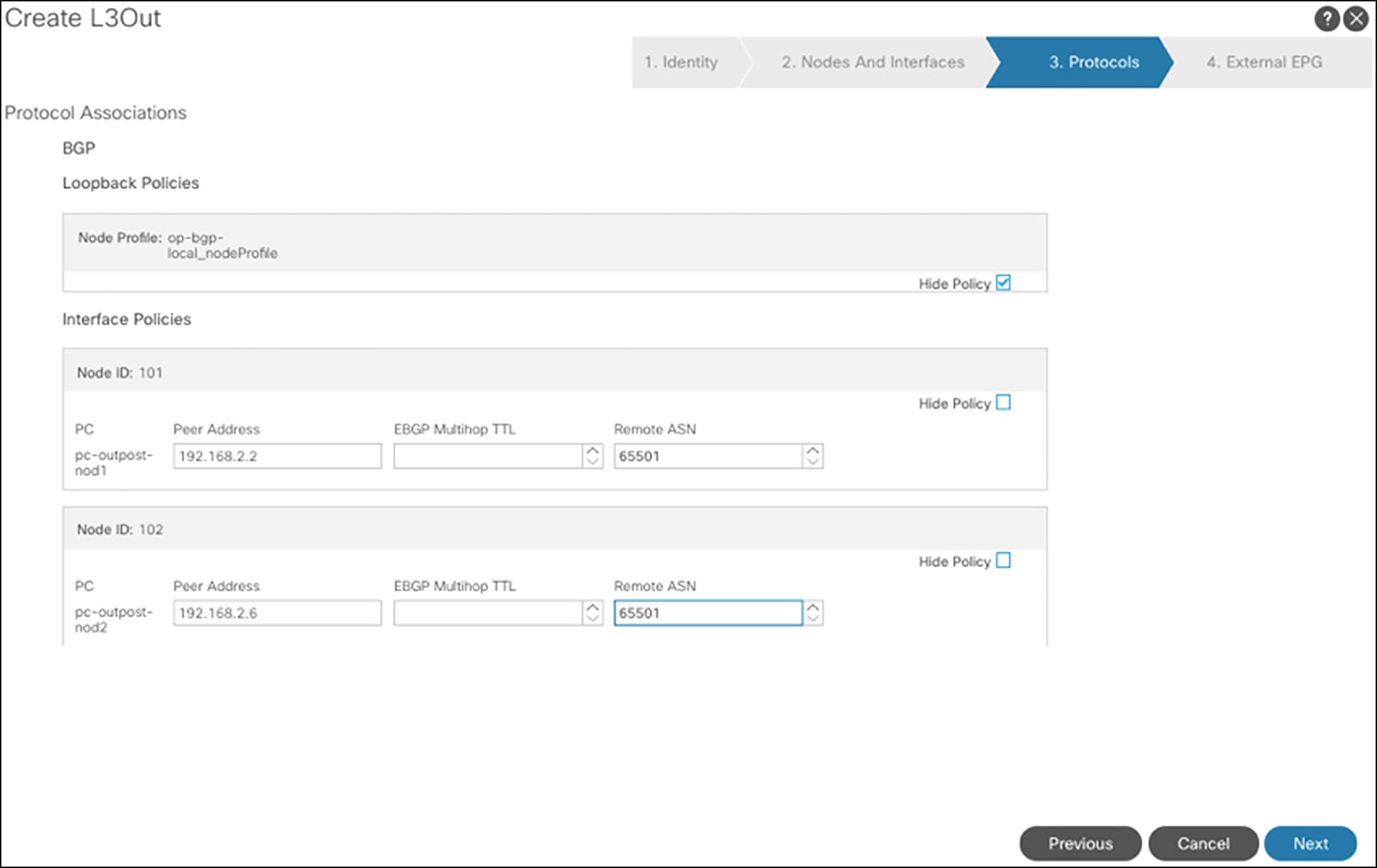 Note:      The above shows the configuration using the APIC GUI interface. Customers can also use the APIC API to program the fabric.

Cisco Cloud ACI for AWS extends the ACI policy and operational model to workloads deployed in the AWS cloud. It is architecturally built on top of AWS cloud-native APIs and services so customers can leverage the native network constructs and services provided by AWS without going through extra gateways or hops. Key customer benefits of Cisco Cloud ACI are the following:

●     A single pane of glass for their day-to-day operational needs of visibility, monitoring, and troubleshooting across their complex hybrid cloud deployments

For more information on Cloud ACI for AWS, refer to the Cisco and AWS jointly authored white paper: https://www.cisco.com/c/en/us/solutions/collateral/data-center-virtualization/application-centric-infrastructure/white-paper-c11-741998.html.

With AWS Outposts being an extension of AWS cloud-native services to on-premises data centers, the current Cisco Cloud ACI solution automatically will support AWS Outposts instances with the full benefits listed above. After connecting AWS Outposts to a Cisco Nexus fabric as described above (in either ACI or NX-OS mode), Cisco Multi-Site Orchestrator (MSO) and Cisco Cloud ACI (as shown in Figure 6) will be used to normalize network policies for applications across on-premises ACI fabrics, AWS regions, and AWS Outposts instances in multiple regions. With Cloud ACI, the benefits of automated intersite connectivity can also be extended to AWS Outposts for easy connectivity and optimal intersite forwarding paths. With Cisco Cloud ACI, the application network profiles are centrally defined on Cisco ACI Multi-site Orchestrator (MSO), which deploys them to the desired site, including ACI fabrics, AWS regions, and AWS Outposts. Since AWS Outposts is logically an extended part of an AWS region, AWS Outposts–related configurations (such as VPCs, subnets and EP selectors, etc.) are defined under AWS cloud site-local properties in the same way as the normal AWS cloud site. Figures 7 and 8 show an example of an MSO template for an AWS cloud site with Outposts, and the AWS Outposts site-local configuration. 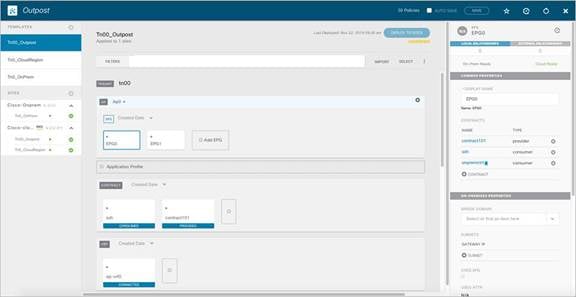 Example of MSO template for a site with an AWS Outpost Example of an Outpost site-local configuration

Note:      The above shows the MSO GUI. Customers can also use the MSO API to define the required templates.