The OTU2 XPonder consists of a 4-port XFP-based 10-Gigabit transponder that supports multiple bit-rate signals over a 100-GHz-spaced, ITU-compliant wavelength:

You can independently configure each of the four interfaces to support the Optical Transport Network (OTN) wrapper. Combining the XFP and OTN configuration enables multiple configurations. For example, two gray XFPs with no OTN on 2-port and 2-DWDM XFPs with OTN wrapper enabled allow this card to act as two 10G transponders in a single board. Using amplification and dispersion compensation, the OTU2 XPonder card is capable of a 1000-km reach. When operated within the outlined specifications, each card will transport the 10-Gbps signal with a maximum bite error rate (BER) of 10E-15.

The OTU2 XPonder cards are deployable in the 12 multiservice interface card slots of the Cisco ONS 15454 platform, in systems with or without cross-connect cards. The only required common card is the appropriate timing, communications, and control card (TCC2P). It is therefore possible to have twenty-four 10G transponders on a single Cisco ONS 15454 MSTP shelf.

You can configure boards to operate in the following modes:

In the operating mode shown in Figure 3, the Cisco ONS 15454 OTU2 XPonder card behaves like two 10G multirate transponders. Port 1 behaves as a client connected with port 3, which behaves as a trunk. The same applies to port 2 as a client and port 4 as a trunk. In this configuration, G.709 on the client port is disabled.

In the operating mode shown in Figure 4, the Cisco ONS 15454 OTU2 XPonder card behaves like two 3R regenerators. Port 1 behaves as a trunk connected with port 3, which behaves as a trunk. The same is true for ports 2 and 4. In this configuration you can enable G.709 on all the ports. Please note that the FEC coding algorithm is asymmetric because ports 1 and 2 support standard FEC (GFEC ITU-T G.975) whereas ports 3 and 4 support E-FEC (ITU-T G.975.1).

In the operating mode shown in Figure 5, the Cisco ONS 15454 OTU2 XPonder card behaves like a single 3R regenerator. Only ports 3 and 4 are enabled as trunks, whereas ports 1 and 2 are deactivated.

In the operating mode shown in Figure 6, the Cisco ONS 15454 OTU2 XPonder card behaves like an MR 10G transponder and an MR 3 regenerator with FEC on one port and EFEC on the other port.

In the operating mode shown in Figure 7, the Cisco ONS 15454 OTU2 XPonder card provides a DWDM trunk protection for a single client input.

The OTU2 XPonder card is a plug-in module to the Cisco ONS 15454 MSTP, enabling a cost-effective architecture for delivering high-rate 10-Gbps services. The OTU2 XPonder card architecture contains a single client interface that is mapped to a single line interface, without accessing the Cisco ONS 15454 shelf cross-connect fabric. The interfaces are based on XFP Multi Source Agreement (MSA). Various types can be used depending on reach and application:

An important feature of the OTU2 XPonder card is the ability to configure the FEC mode. Ports 1 and 2 have two modes of operation, NO FEC and FEC, whereas ports 3 and 4 can also be configured in E-FEC mode.

You can configure error-coding performance:

●   NO FEC: No Forward Error Correction

For SONET- or SDH-based client payloads, when provisioned in transparent operating mode, the card passes all of the SONET/SDH overhead bytes transparently. The card monitors important SONET/SDH overhead bytes, such as B1 (section BIP-8) and J0 (section trace), to allow fault isolation and performance-monitoring capabilities. Termination of the line data communications channel (LDCC) is user-provisionable to enable the platform processor to route the DCC information for intracarrier networking or to allow the DCC information to be transported untouched through the general communications channel (GCC) of the digital wrapper for intercarrier networking.

For 10 Gigabit Ethernet and OC-192/STM-64 payloads, digital-wrapper technology (G.709) is used to add a management wrapper to the service, allowing the OTU2 XPonder card to transparently forward the payload while enabling performance metrics to be derived to help ensure circuit service quality.

For OTU2 clients, the XPonder card can transparently transport OPUk and ODUk terminating OTUk as a fully standard G.709 regenerator.

The 10GE LAN PHY-to-WAN PHY conversion is implemented according to the standard defined in IEEE 802.3: WIS (WAN interface sublayer). The 10GE LAN PHY interfaces have an effective line rate of 10.3125 Gbps (10 Gbps of data traffic encoded in a 64B/66B protocol). The 10GE WAN PHY interfaces conform to the SONET/SDH standards to achieve 9.95328 Gbps and allow service providers to use their existing SONET/SDH Layer 1 infrastructure.

WAN PHY is used to transport 10 Gigabit Ethernet across SDH/SONET or WDM systems without having to directly map the Ethernet frames into SDH/SONET first. The WAN PHY variants correspond at the physical layer to 10GBASE-SR, 10GBASE-LR, 10GBASE-ER, and 10GBASE-ZR, respectively, and hence use the same types of fiber and support the same distances.

Fast Reroute (FRR) is a Layer 3 protection mechanism that allows for switching of the data path without relying on Layer 1 concerns. The switch in most of the cases happens with little or no loss of data and is guaranteed to happen within 50 milliseconds. The switch would indirectly be triggered by the events that would bring the interface down, resulting in almost certain data loss during the time when defects are detected until a FRR switch is completed.

With IP over DWDM (IPoDWDM), the FEC circuitry resides on a router line card. Therefore, the router has visibility into the BER statistics before the FEC mechanism corrects these errors, allowing the router to realize that the working path is degrading beyond a reasonable point (which is defined by a user-settable threshold). At this point, the router can start its protection logic and establish a protection path while traffic continues to flow on the degrading working path. Depending on the failure mode, the router may have tens or even hundreds of milliseconds to move away from the working path before the FEC mechanism fails.

The FEC mechanism detects failures before they actually happen and also corrects errors introduced during transmission or due to a degrading signal. It was proposed that the DWDM PLIMS trigger an FRR switch based on the number of FEC corrected bits. The number of FEC corrected bits would provide a good indication that the line is about to have a failure. FEC-based FRR therefore allows for triggering the switch before that failure happens with little or no loss of data. In fact, the FEC function is able to correct a high BIR (up to 10E-3) providing an error-free signal to the line card connected to the PLIM. Triggering the FRR with a lower BER will cause a FRR before any packet is lost.

The prevailing video encoding is based on MPEG-2 and MPEG-4 standards, which use differential coding of the frame with reference to a full frame that is sent only relatively infrequently. When this frame (called the I-frame) is lost, a large number of users may experience a visible outage on their screens, lasting for up to several seconds. High-resolution encoding schemes, such as MPEG-4, are actually more susceptible to longer outages because I‑frames are less common in the data stream. For this reason we argue that it is important to strive to minimize the packet loss even below the SONET/SDH benchmark, ideally aiming for zero packet loss.

Starting with Release 9.2, OTU2XP cards support Proactive Protection Regeneration, which notifies the routers of the incoming FEC errors. This feature involves modifying the G709 protection bytes in ODverHead FRR Regen is supported on ports of OTU2XP only when the card is in the “Standard Regen” and “Enhanced FEC” card modes for 10GE payloads.

●   When a span between two Routers an OTU2 XP is used as OTU2 Regen is degrading, the downstream router will not be aware of it. (Therefore, the router will not switch to an alternate path.)

●   The OTU2-XP will signal to the downstream router about the degradation. This signal is PF-FDI (using the APS/PCC bytes of the G.709 ODU OH).

●   The router integrates pre-FEC error backward defect indicator (PF-FDI) for three frames and then acts as if it has detected the BER threshold crossing.

●   Router B activates its Layer 3 switching.

●   Router B raises a PF-BDI flag to ask router A to switch. This PF-BDI will propagate through the OTU2-XP.

●   When router A gets this PF-BDI message, router A also activates its Layer 3 switching.

OTU2-XP allows you to extend FRR when OTU2 regeneration is required between the routers, sending PF-FDI when it sees a degrading link.

The OTU2 XPonder card allows the timing to “flow through” from client to line optical interfaces. Receive timing from one interface (client or line) is used to time the other transmitter interface (line or client). This flow-through timing enables the transported signal to remain independent from the node timing. It is also possible to extract the clock from any of the available ports and pass it to the TCC, but the card does not use the clock coming from the TCC.

For 10G Fibre Channel the following parameters are available:

FEC/EFEC performance monitoring parameters are also available; they are listed in Table 3.

The OTU2 XPonder card incorporates faceplate-mounted LEDs to provide a quick visual check of the operational status of the card. An orange circle is printed on the faceplate, indicating the shelf slots where the card can be installed.

The OTU2 XPonder card provides a full set of 10G Fibre Channel performance-monitoring parameters (Figure 10). Even if it is not equipped with the distance-extension mechanism, the XPonder easily supports 10G Fibre Channel generated by Cisco MDS 9000 Series interfaces.

In a single shelf up to an eighteen 10G Fibre Channel signals terminal system can be accommodated.

The OTU2 XPonder card provides the capability to support the 3R function in a single card. Because two ports can support E-FEC and two ports can support GFEC only, two possible configurations are allowed, depending on network topology: single regeneration E-FEC/E-FEC or double regeneration FEC/E-FEC. Regeneration is fully compliant with the G.709 standard, allowing you to transparently transport the ODU2 frame and terminate the OTU frame. It also can be used as a double regeneration for DWDM XENPAK/X2/XFP optical pluggable interfaces placed on other Cisco routers or switches in IPoWDM scenarios. 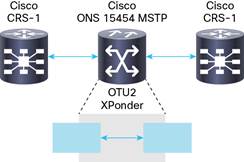 ●   Single software load: One software load supports all restoration types, eliminating unnecessary guesswork when ordering. All protection configurations are covered by a single right-to-use software license. After you purchase the software, all features and functions are available to you.

●   Common chassis: A common chassis supporting all optical interface speeds allows the technician to spend time deploying bandwidth and services instead of learning about multiple equipment platforms. Many equipment vendors offer optical-line-speed-specific platforms (for example, OC-3/STM-1 or OC-12/STM-4) and categorize platforms by restoration mechanisms (for example, UPSR/SNCP, 2F-BLSR/MS-SPR, and 4F-BLSR/MS-SPR). This approach both causes ordering confusion and brings into question whether the inventoried equipment will accommodate the functions required to support the desired application. The line-rate and restoration flexibility of the Cisco ONS 15454 platform makes ordering and deployment quick and easy.

For pluggable support and software release dependency, please refer to the Pluggables Configuration Guide at: http://www.cisco.com/en/US/prod/collateral/optical/ps5724/ps2006/brochure_c02-452560.html.