If you are reading this document, you’re either already convinced or curious about the potential advantages that Cisco’s IPsec Virtual Tunnel Interface (VTI) will bring.

This is a normal transition, and some new platforms and software releases will exclusively support IPsec VTIs.

As time goes on, we at Cisco will cease using the Cisco IPsec Static Crypto Map (SCM) and Dynamic Crypto Map (DCM) features of Cisco® IOS XE, so it’s better to get prepared for the transition.

Cisco Static Crypto Map has been a legacy way to provision IPsec sessions for decades. It identifies peer and traffic to be encrypted explicitly using Access Control Lists (ACLs). This type of configuration is also called policy-based VPN. The original use case was to accommodate a few tunnels with different profiles and characteristics (partners, sites, locations). When we have the information of both peers about what policies they are going to use and what the IP addresses are of both devices, we normally use Static Crypto Map. Dynamic Crypto Map was developed to accommodate peers that share the same characteristics (for example, multiple branch offices sharing the same configuration) or peers that have dynamic IP addressing (DHCP, etc.).

But as IPsec use cases and scalability grow significantly, the legacy crypto map features have been shown to have many limitations and problems. Let’s take a look at the following example. 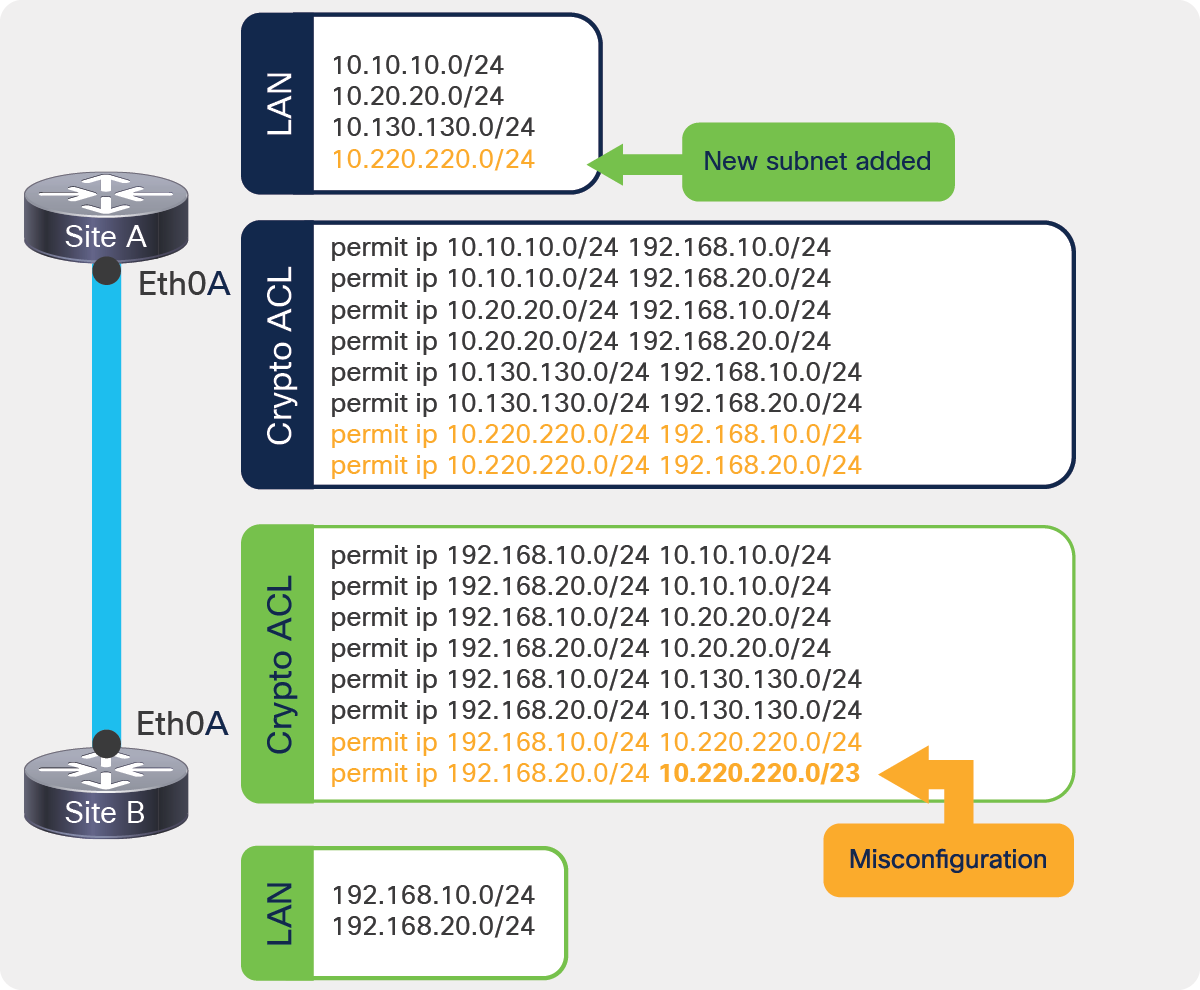 Now scale it up to thousands of sites and tens of thousands of ACEs in each site. It is intuitive to understand that crypto map is facing the challenges of:

●      Complexity of configurations when you have long crypto ACLs

●      Proneness to mismatching of ACL configurations

●      And, for the router itself to manage crypto map with large-scale configuration changes of ACLs/ACEs, session creations, churn, and rekeying can expose the system to heavy utilization of system resources, potentially leading to traffic outage or even system failure.

Because crypto map is directly attached to physical interfaces, there is no clear feature separation in the underlay transport vs. overlay IPsec session. This adds complexity to the support features that deal with both pre- and post-encapsulated traffic; for example, QoS pre-classify and IP access-group. And there are features that work only with either pre- or post-encapsulated traffic but not with both; for example, embedded packet capture and NetFlow. There is lack of support for multicast traffic, non-IP traffic, and equal-cost multipath (ECMP) traffic. And there is no crypto map support for certain interface types such as Bridge Domain Interface (BDI) and port channel.

IPsec VTIs simplify the configuration of IPsec for protection of remote links, support multicast, and simplify network management and load balancing. If we were using VTI in the previous example, to add a new subnet 10.220.220.0/24 in the Site A LAN side, we would only require the routing configuration to add a new RIB entry in Site B to route the subnet over the tunnel interface: 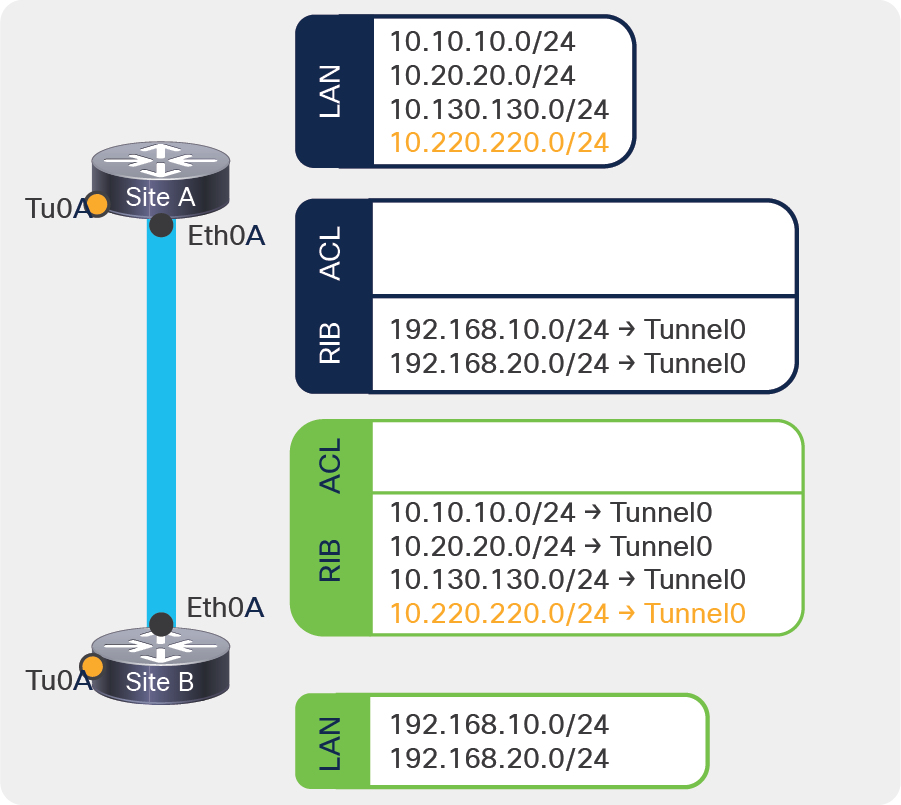 The benefits of VTI are significant:

●      Provides flexibility to send and receive encrypted traffic on any physical interface, including multipath and port channel.

●      Traffic is encrypted/decrypted when forwarding to/from the tunnel interface and is managed by the IP routing table.

●      Minimal configuration as on-demand virtual access is cloned from a virtual-template interface in a Dynamic Virtual Tunnel Interface (DVTI).

Let’s take the following network diagram as an example:

Prior to Cisco IOS-XE Release 16.12, the VTI configuration was not compatible with a crypto map configuration. Both ends of the tunnel had to be configured with the same type of VPN to interoperate.

2.5 Migrate only router A to VTI – VRF-aware

2.7 Migration when crypto map ACL use protocol or deny entries

There are cases where, instead of matching on an IP subnet, the crypto map ACL uses the match protocol (tcp, udp, icmp). In that scenario, IKEv2 routing will not work, and the ACL will have deny entries. In such cases, the migration plan is to enable Policy-Based Routing (PBR) on the LAN-facing interface, where the traffic that passed the ACL classification will be routed to the VTI, and other traffic will follow the default routing decision.

3.1 Be fully aware of existing restrictions on crypto map

●      Crypto map is not supported on Bridge Domain Interfaces (BDIs).

●      Crypto map is not supported on a port-channel interface.

●      Cryoto map is not supported on a VASI interface.

●      If a transport profile is enabled on a tunnel, crypto map is not supported on the tunnel source interfaces.

●      Crypto map is not supported on a tunnel interface of Multilink Frame Relay.

●      Crypto map is not supported on loopback interfaces.

●      Tunnel interfaces with tunnel protection sourced from an interface that has crypto map are not supported:

For true dual stack support, the recommendation is to deploy Cisco FlexVPN, which supports dual stack FlexVPN over IPv4 or IPv6 transport.

Be aware of scalability differences for SCM and VTI on the platform you plan to migrate. There are platforms that may claim to support up to 8000 IPsec sessions with SCM, but only 4000 IPsec VTI tunnels. It is recommended to migrate to FlexVPN, which is designed to support high scale deployments; up to 10,000 FlexVPN (IKEv2/DVTI) tunnels can be supported. DCM can only scale up to 500 IPsec sessions; migrating to FlexVPN will provide a significant scalability improvement for the deployment.

3.5 Crypto map on a physical source interface of a tunnel-protection interface

In Cisco IOS XE, we do not support having a crypto map on a physical source interface of a tunnel protection interface. In classic Cisco IOS®, it is fully supported.

In such a configuration, a third-party device cannot use a VTI. An incoming packet should go onto physical or tunnel interface. What is to be expected? The answer is to look specifically at the ACL; if the packet matches on the physical ACL, as well as with the Security Parameter Index (SPI), the packet will be encrypted over the crypto map IPsec session; if not, the packet will be encrypted over the tunnel interface if the tunnel SPI picks it up. With Cisco IOS XE Release16.12, such a configuration can be migrated to multi-SA VTIs.

We have made everything possible to help you transition from your current SCM and DCM environment. Multi-SA VTI is a replacement for a crypto map based (or policy based) virtual private network configuration. It is backward compatible with crypto-map-based and other policy-based implementations. Support for this feature is available from Cisco IOS XE Release 16.12.

While you work that way in backward-compatibility mode, you know you’re safe and can start exploring new VPN technology, such as FlexVPN, which is the new, unified VPN solution offered by Cisco. FlexVPN takes advantage of the IKEv2 protocol and combines remote access, site-to-site, hub and spoke, and partial mesh VPN deployments.

So, whenever you feel comfortable, you can make the switch.

Welcome to the VTI and FlexVPN.

Configuring Security for VPN with IPsec