The Interactive Voice Response option is a separately licensed option that integrates with Cisco Unity Express. The functionality described for IVR is available only if you have purchased a separate IVR software license.

A script stored on the router module runs in response to a request from a user or a predetermined condition. The scripts allow callers to receive recorded audio messages and prompts for further action. For example, if a caller calls a business during nonbusiness hours, the caller can hear either a recorded message stating the business's hours of operation or hear a prompt to leave a message. The message and prompt are the result of the Cisco Unity Express software running a script.

A more advanced use of scripts could involve checking an account balance at a bank. For example, a caller is prompted to enter an account number by using a telephone keypad, and the caller then receives an audio message stating the account balance.

This section provides information on the main concepts that are used in writing scripts.

Use variables in your program to hold data. You must provide a name and a type for each variable that you want to use in your script. Use the variable name to refer to the data that the variable contains. The type of variable determines what types of data (text, integers, and so on) it can hold and what operations can be performed on it.

In addition to performing an operation, an operator returns a value. The return value and its type depend on the operator and the types of data the operator is operating on. For example, the increment operator (increment step) adds 1 to a value.

Without flow control steps, the script runs these steps in the sequential order in which they appear in the Design pane from top to bottom. You can use flow control in your scripts to conditionally run steps, to repeatedly run a block of steps, and to otherwise change the normal, sequential flow of the script.

Control steps direct the script to proceed in a specific way. For example, you might want a set of steps to run only if certain conditions are met.

Flow control is accomplished by following these steps:

Switch: Matches a condition to one of several tasks.

Goto: When a script reaches a Goto step, the script stops running and continues at the indicated next point in the script.

Error handling provides a way for a script to stop running in a predetermined sequence, or to continue running when it receives unexpected results or when a task does not complete successfully.

Prompts exist as audio files on the router and have the file extension .wav, as in greeting.wav. The Cisco Unity Express Script Editor uses the following two types of prompts:

User prompts: Defined by the user, and managed by the administrator through Voice Mail > Prompts on the Cisco Unity Express GUI administrator interface or by calling in to Administration via Telephone (AvT).

A trigger is a specific event or condition that causes an application to run. There can be several triggers for a single application. A number of triggers are created automatically in Cisco Unity Express.

The functionality described for the Cisco Unity Express IVR software is available only if you have purchased a separate IVR software add-on package.

To select the IVR option, complete the following steps: 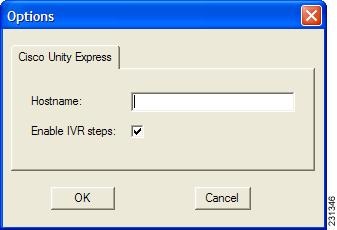 In the Hostname field, enter the DNS hostname or IP address of your host.

The Palette pane includes the additional IVR steps you need to create your script.

The following simple scenario illustrates scripting techniques. Table 1lists and describes the call flow script steps of this scenario. In this case, the script:

Checks for an emergency alternate greeting.

Checks if this time is during regular business hours.

Plays a custom greeting and transfers the caller to the operator if the current time is not during regular business hours.

Plays a menu prompt that allows the caller to dial 1 for dial-by-name, 2 for dial-by-extension, or 0 for an operator if the current time is during regular business hours.

Checks for the number of times the caller has been rerouted to the Main Menu.

Add to the Menu step if necessary.

A call flow is a description of events that occur during a call. Describing a call flow in detail allows you to recognize the script editor steps to use and avoid logic flaws in your script. In the call flow for this scenario, extensions are in the range of 200 to 299. You can add additional error handling branches. For example, if the caller tries multiple unsuccessful transfers, the script plays a "Try again later" prompt and disconnects the call.

Validating and Testing a Script

To debug your script, verify its operation in various scenarios, such as regular user input, timeout, and anticipated error conditions.

Before uploading a script, use the Cisco Unity Express Script Editor Validate tool and check that the Validation Succeeded message appears. Any errors appear in the Debug pane. Double-click them to find the error condition in the script.

After uploading the script to the Cisco Unity Express system, use the default traces to troubleshoot problems. Use the EXECUTING_STEP filter to display only the script steps, as they are run, in the trace. Use the clear trace command to clear previous trace messages before using the show trace command. For example:

You must create all variables in a script before you can use them. If you create a variable and you later delete it, use the Validate tool to find it.

Set the Parameter of a variable property to make the variable available to the Cisco Unity Express administrator through the web page.

Alternately, do not set the Parameter of a variable property to prevent it from being accidentally changed through the web page.