You can join two or more Unity Connection servers or clusters to form a well-connected network, referred to as an HTTPS network. The servers that are joined to the network are referred to as locations. (When a Unity Connection cluster is configured, the cluster counts as one location in the network.) Within a network, each location uses HTTPS protocol to exchange directory information and SMTP protocol to exchange voice messages with each other.

Figure 1-1 A Cisco Unity Connection 10.0(1) Network Joined by HTTPS Links Among All Locations 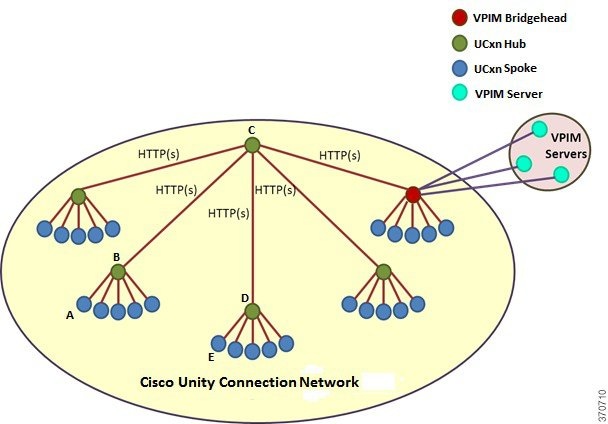 Unity Connection 10.x supports the Voice Profile for Internet Mail (VPIM) protocol, which is an industry standard that allows different voice messaging systems to exchange voice and text messages over the Internet or any TCP/IP network. VPIM is based on the Simple Mail Transfer Protocol (SMTP) and the Multi-Purpose Internet Mail Extension (MIME) protocol.

VPIM Networking is supported for use with Cisco Business Edition.

Unity Connection 10.x supports up to 100 VPIM locations and 150,000 VPIM and System contacts in the Connection directory. These limits apply either to the directory of a single Unity Connection server or cluster pair, or to the global directory in a network.

To support 150K contacts on a single Unity Connection server, you need to dedicate the server as VPIM bridgehead only.

Each location in an HTTPS network has its own directory of users and other objects that are created on the location and are said to be "homed" on that location. The collection of objects and object properties that are replicated among locations is referred to as the global directory.

See the following section for details on the specific objects and object properties that are replicated during directory synchronization:

Replication Within an HTTPS Network

Within an HTTPS network, the objects and object properties that are replicated during directory synchronization are shown in Table 1-1 :

In most cases, you can use replicated objects just as you would use local objects; for example, you can assign a remote user to be the message recipient of a system call handler, or configure the search scope of a user to use a remote search space. Note the following exceptions:

On each location in a network, you can configure the schedule on which the Reader polls the remote Feeder for directory data, and the schedule on which it polls for recorded names. In Cisco Unity Connection Administration interface of a Unity Connection location, you can access the schedules on the Tools > Task Management page by selecting either the Synchronize Directory With Local Network task or the Synchronize Voice Names With Local Network task.

The tasks are not available unless HTTPS networking is configured on the system.

Behavior of Cluster in Standard mode

The following is the behavior of Unity Connection cluster and Reader/Feeder services on the cluster in Standard mode:

Behavior of Cluster in Alert mode

The following is the behavior of Unity Connection cluster and Reader/Feeder services on the cluster in Alert mode:

When a cluster node is in split brain condition, the Reader service installed on the cluster node remains in inactive state. For more information see Install, Upgrade, and Maintenance Guide for Cisco Unity Connection, Release 10.x, available at http://www.cisco.com/c/en/us/td/docs/voice_ip_comm/connection/10x/install_upgrade/guide/10xcuciumgx.html.

The size limits at the time of the 10.x release are:

In an HTTPS network, you are allowed to link up to 25 Unity Connection locations. However, whenever the Reader service installed on the Unity Connection locations runs, it checks the limit for the replication objects, such as users or contacts. If the number of replication objects exceeds its maximum limit, the Reader service will move to "Warning" mode. In the Warning mode, you can still create new directory objects for remote location objects but you might face performance issues. Therefore, it is recommended to get the Reader service out of Warning mode to avoid such issues. In order to move the Reader out of "Warning" mode, you must remove enough number of objects of the appropriate type to bring the number less than the maximum limit.

See the following section for details on how messaging is handled in specific networking situations:

Handling the Messages to System Distribution Lists Within an HTTPS Network

Unity Connection includes the following predefined system distribution lists: All Voicemail Users, Undeliverable Messages, and All Voicemail-Enabled Contacts. Each Unity Connection server in your organization has a distinct version of each of these lists. If you have not changed the names of these lists to be unique, during initial replication each server automatically adds the remote server name to the display name of any remote lists whose names overlap with local list names.

By default, the predefined lists on each Unity Connection location have the same recorded name, and the All Voicemail Users and All Voicemail-Enabled Contacts lists have the same extension at each location (the Undeliverable Messages list by default is not assigned an extension, because users do not typically address messages to this list). When setting up an HTTPS Unity Connection network, you should consider modifying the recorded name of each All Voicemail Users list and each All Voicemail-Enabled Contacts list; if you do not, users can hear a confusing list of choices when they address messages by name to one of these lists. When users address by extension to a list whose extension overlaps that of another list, they reach the first list that is located when Unity Connection searches the partitions of the user search space in order.

In order to limit replication traffic and keep the directory size manageable, only a subset of user information is replicated from the home location of the user to other locations. For this reason, only the user home location has information about call transfer settings, greetings, and other specific details for the user. In order for a location to properly handle calls destined for a user on a different location, the location that receives the call must hand off the call to the home location of the user. The purpose of the cross-server features is to make the user experience in a networked environment almost the same as in a single server environment, as shown in Table 1-2 .

For more information and instructions on enabling the cross-server features, see the “Cross-Server Sign-In, Transfers, and Live Reply in HTTPS Networking 10.x” chapter.

If your organization has a separate phone system for each location, users at one location dial a complete phone number, not just an extension, when calling someone at another location. When users sign in to send messages to users on another networked location, the number that they enter when addressing a message by extension depends on whether the numbering plans overlap across locations.

When numbering plans do not overlap across networked locations-that is, when user extensions are unique across locations-users can enter an extension when addressing a message to a user who is associated with another location. Optionally, as a convenience for users in this circumstance, you may choose to add alternate extensions to each user account, so that users do not need to remember two different numbers-one for calling a user directly, and one for addressing a message. However, if you do not set up alternate extensions, be sure to tell users to use the extension instead of the full phone number when addressing messages to users who are associated with another location.

Note that alternate extensions have other purposes beyond their use in networking, such as handling multiple line appearances on user phones.

It is important to note the difference between the following two circumstances:

As long as identified user messaging is enabled on a Unity Connection location, Unity Connection is able to identify both local and remote users. Note, however, that for identified user messaging to work in both cases, the initial search scope of the call must be set to a search space that locates the correct user based on the calling extension, regardless of whether the caller is a local or remote user.

If a user calls from an extension that is in a partition that is not a member of the search space that was set as the initial search scope for the call, the call is not identified as coming from the user. If the extension of the user overlaps with an extension in another partition that also appears in this search space, the call is identified as coming from the first object that Unity Connection finds when searching the partitions in the order that they appear in the search space.

In situations where numbering plans overlap across locations, it is therefore possible to have a user leave a message that is incorrectly identified as coming from another user with the same extension in a different partition. Because the initial search scope of the call is based on call routing rules, to avoid this situation, use the following configuration guidelines: