Most of the devices which require the use of custom tasks expose their functionalities via APIs (XML/JSON). The standard way of consuming any API is a normal HTTP/HTTPs-based call which is provided by clients such as Postman, in a very simple way.

In the Release 6.6, Generic API task is introduced as an out-of-box task to help you to consume any API in a standard HTTP/HTTPs manner.

The pre-defined structure of a HTTP/HTTPs based API includes:

What you can expect from Generic API Task

In this page, you can:

When you execute a login API for the Cisco UCS Manager account using a generic API task, the successful response for the API is as follows:

Example 2: Making a JSON based Login REST API call to an APIC device

The JSON response of a successful login API call to an APIC device is as follows:

As the output is a JSON response, find the JSONPath for the token attribute. The JSONPath is similar to XPath where we traverse the element from the parent element.

The JSONPath for the token attribute from the response is as follows:

You have to define the output in the Generic API task as:

Using the in-built filtering capability of XPath and JSONPath, you can define the XPath or JSONPath of an element and set some filtering criteria.

Let’s take the following JSON response which displays a list of employee details:

If you want to fetch the ID of employee Frank, you can use the filtering criteria as in the following JSONPath expression:

You have to define the task output using the JSONPath expression as:

Similar to this example, you can use the XPath filtering capabilities to filter XML response and output the desired node or element value from the response.

You can define variables in a task definition as follows:

For example, you can define the user name and employee name as: @{Username}, @{Employee Name}

Variables can be used in the following places:

These variables become the task input and the values for the variables can be input either as a mapped input or task input.

In this example, let’s see how you can execute the getEmployeeDetails API (available at the following URL) to fetch employee details by passing run-time employee ID using the generic API task.

To execute the API using the generic API task, the employee ID must be set as a variable and the value must be provided at run-time. The IP address and port values are also required but can be static in nature.

You can define the API structure using the generic API task as follows:

The @{Employee_ID} notation creates a task input named as Employee_ID. You can map the input to either workflow input or define the value statically as task input.

In most of the HTTP API calls, a body content is sent as a payload. The payload contains the information required to perform the basic operation, such as, Post, Put, and so on.

Let’s take an example of getting a session ID from Cisco UCS Manager which can further be used as a parameter to perform other operations.

The API path required to get session ID is /nuova. The request content that needs to be sent to the URL is:

The API structure defined using a generic API task to retrieve a session ID is as follows:

Here, the User_Name and Password variables are the task input and the values can be provided either statically or as mapped input.

The .encrypt keyword is used to make sure that the generated task input type for the defined variable is password and the password will not be visible in the task or during the task execution.

By default, the task input type of the defined variable is generic text.

For devices managed in Cisco UCS Director, the request content can also be defined using the following keywords:

In certain situations, you may want to use variables in the XPath or the JSONPath of the element available in the response. For example, let’s take the following JSON response of an API execution that displays the employee details.

To output the employee ID of an employee, the following JSONPath is used:

The JSONPath to find employee ID for the employee name that is passed as a variable is as follows:

In the same way, you can define the variable in the XPath definition while defining the output of the generic API task.

Generic API task allows you to define the HTTP header that is required for HTTP/HTTPS based API execution. The header parameters are consumed as task input in the next page automatically, and the parameters get value statically or as a mapped input during run-time.

If you want to pass the header value with some portion of it as static and rest of the portion as a variable, use the dollar ($) concept available in Cisco UCS Director to define the value (with static and variable portion) for the header.

For example, in the following figure, there are two header parameters required for the API execution: 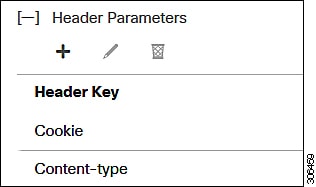 These header parameters are automatically set as task input, and the values for the parameters can be provided either statically or as a mapped input.

Say, if the value required for the Cookie parameter is as follows:

Where, the X-Device-Token is a fixed part and TOKEN_VALUE is a value which can be a variable.

To define the value for the Cookie task input, use the dollar symbol as in the following figure:

HTTP Basic Authentication is a standard way to authenticate clients with server. The authentication information is passed using an Authorization header parameter that contains the word Basic followed by a space and a Base64-encoded string username:password.

Generic API task allows you to define basic authentication mechanism in one of the following ways:

To define rollback API for the generic API task, perform the following:

To define rollback workflow for the generic API task, perform the following: