Virtualization allows you to create multiple Virtual Machines (VMs) to run in isolation, side by side on the same physical machine.

Each virtual machine has its own set of virtual hardware (RAM, CPU, NIC) upon which an operating system and fully configured applications are loaded. The operating system sees a consistent, normalized set of hardware regardless of the actual physical hardware components.

The virtual hardware makes it possible for many servers, each running in an independent virtual machine, to run on a single physical server. The advantages of virtualization include better use of computing resources, greater server density, and seamless server migration.

A virtualized server implementation consists of one or more VMs that run as guests on a single physical server. The guest VMs are hosted and managed by a software layer called the hypervisor or virtual machine manager (VMM). Typically, the hypervisor presents a virtual network interface to each VM and performs Layer 2 switching of traffic from a VM to other local VMs or to another interface to the external network.

Working with a Cisco virtual interface card (VIC) adapter, the Cisco Virtual Machine Fabric Extender (VM-FEX) bypasses software-based switching of VM traffic by the hypervisor for external hardware-based switching in the fabric interconnect. This method reduces the load on the server CPU, provides faster switching, and enables you to apply a rich set of network management features to local and remote traffic.

VM-FEX extends the IEEE 802.1Qbh port extender architecture to the VMs by providing each VM interface with a virtual Peripheral Component Interconnect Express (PCIe) device and a virtual port on a switch. This solution allows precise rate limiting and quality of service (QoS) guarantees on the VM interface.

A Cisco VIC adapter is a converged network adapter (CNA) that is designed for both bare metal and VM-based deployments. The VIC adapter supports static or dynamic virtualized interfaces, which includes up to 128 virtual network interface cards (vNICs).

There are two types of vNICs used with the VIC adapter—static and dynamic. A static vNIC is a device that is visible to the OS or hypervisor. Dynamic vNICs are used for VM-FEX by which a VM is connected to a veth port on the Fabric Interconnect.

VIC adapters support VM-FEX to provide hardware-based switching of traffic to and from virtual machine interfaces.

SR-IOV is defined and maintained by the Peripheral Component Interconnect Special Interest Group (PCI-SIG), an industry organization that is chartered to develop and manage the PCI standard. For more information about SR-IOV, see the following URL:

Hypervisors that support SR-IOV include Linux KVM and Microsoft Hyper-V.

Overview of the Cisco UCS VM-FEX with Microsoft SCVMM Architecture

The Hyper-V uses Single Root I/O Virtualization (SR-IOV) technology to deploy virtual connections. The VM's interface gets mapped to the virtual function. The SR-IOV support was added to Cisco UCS Release 2.1 to allow the deployment of VM-FEX in Microsoft Hyper-V hosts, but it lacked a centralized VM network management. Release supports the management plane integration with Microsoft SCVMM and provides a centralized VM network management for the Hyper-V hosts. The deployment leverages the SR-IOV technology that is available on the Cisco virtual interface card (VIC) adapters and enables Cisco UCS fabric interconnects (FIs) to be VM aware. 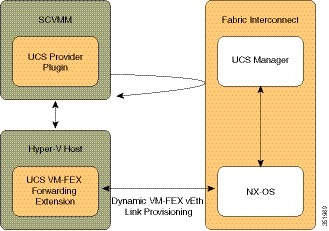 The Cisco UCS VM-FEX forwarding extension is a driver extension that is situated on the Hyper-V host. It ensures that the packets are forwarded to the fabric interconnect (FI) and the switching occurs in the FI. The FI is aware of all the MAC addresses of the VMs. The VM-FEX forwarding extension driver gets the configuration from Microsoft SCVMM and instructs Cisco NX-OS to provision a virtual Ethernet interface for virtunal NICs (vNICs) that come up on the host.

Dynamic VM-FEX vEth Link Provisioning connects the Hyper-v host and Cisco NX-OS. When a VM is online or when you power on a VM, its network card sends a VIC attach using the Cisco VIC protocol and it gets dynamically connected to the FI.

With VM-FEX for Hyper-V, the hypervisor performs no switching of VM traffic. Working with an installed VIC adapter, the hypervisor acts as an interface virtualizer, and performs the following functions:

All switching is performed by the external fabric interconnect, which can switch not only between the physical ports, but also between the virtual interfaces (VIFs) that correspond to the vNICs on the VMs.

Refer to the following Microsoft networking terminology for more information on the networking objects.

A logical switch is the native distributed virtual switch (DVS) by Microsoft. It is a template that you can use to instantiate a virtual switch from. You can define a native switch and attach an extension to it. It is known as a switch extension.

A network segment is also known as a VM Network Definition (VMND). It consists of a VLAN and an IP pool.

A virtual port profile is a profile that defines the quality of service (QoS)/service level agreement (SLA) for a vNIC.

For more information on the networking objects, see Configuring Logical Networking in VMM Overview at http:/​/​technet.microsoft.com/​en-us/​library/​jj721568.aspx.