This chapter describes how to configure the private hosts feature in Cisco IOS Release 12.2SX.

For complete syntax and usage information for the commands used in this chapter, see the Cisco IOS Master Command List, at this URL:

The sections that follow provide more detail about the following private hosts concepts:

Figure 25-1 shows an example of triple-play services being delivered from the switch to multiple end users attached to a DSLAM. In the figure, note the following: 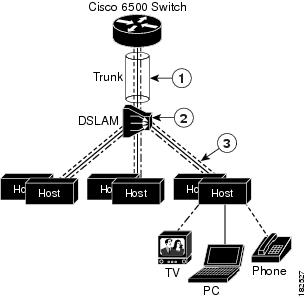 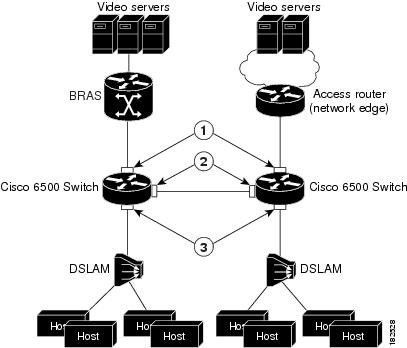 VLANs on the Trunk Port

Interaction with Other Features

When you configure the private hosts feature, observe the following guidelines and limitations:

The SIP-400 and Enhanced FlexWAN modules do not support private hosts.

The private hosts feature is supported on Layer 2 interfaces that are configured as trunking switch ports (802.1Q or ISL trunk ports).

Do not configure protocol-independent MAC ACL filtering with microflow policing when the permitted traffic would be bridged or Layer 3 switched in hardware by the PFC3.

Protocol-independent MAC ACL filtering supports microflow policing when the permitted traffic is routed in software by the route processor (RP).

Do not apply any VACLs or RACLs to a port configured for private hosts. To prevent any existing VLAN ACLs (VACLs) and routing ACLs (RACLs) from interfering with a PACL, configure the access-group mode prefer port command on the port.

VLANs on the Trunk Port

The following guidelines and limitations apply to VLANs:

Interaction with Other Features

The private hosts feature interacts with other features that are configured on the switch as follows:

The following is a summary of the steps to configure the private hosts feature. Detailed configuration instructions are provided in the next section.

Determine which switch ports (interfaces) to use for the private hosts feature.

You can configure the feature on switch ports (802.1Q or ISL trunk ports)

Configure each port (interface) for normal, non-private hosts service. Configure the access-group mode prefer port command on the port. You can configure the VLANs at this step or later.

Enable private hosts on individual ports (interfaces) and specify the mode in which the port is to operate. To determine port mode, you need to know if the port faces upstream (toward content servers or core network), faces downstream (toward DSLAMs), or is connected to another switch (typically, in a ring topology). See the "Restricting Traffic Flow (Using Private Hosts Port Mode and PACLs)" section.

You can configure private hosts only on trunking switch ports (802.1Q or ISL trunk ports) or EtherChannel ports. In addition, you must enable private hosts on all of the switches between the DSLAMs and upstream devices.

To allow wireless users to move from one wireless access point to another, enable index learning on isolated mode ports, which enables MAC address movement between isolated-mode ports.

To enable index learning on the switch, perform this task:

This example shows how to enable index learning on the switch: