The following are prerequisites for your Flexible NetFlow configuration:

The following are restrictions for Flexible NetFlow:

A flow is a unidirectional stream of packets that arrives on a source interface and has the same values for the keys. A key is an identified value for a field within the packet. You create a flow using a flow record to define the unique keys for your flow.

The switch supports the Flexible NetFlow feature that enables enhanced network anomalies and security detection. Flexible NetFlow allows you to define an optimal flow record for a particular application by selecting the keys from a large collection of predefined fields.

All key values must match for the packet to count in a given flow. A flow might gather other fields of interest, depending on the export record version that you configure. Flows are stored in the Flexible NetFlow cache.

You define the size of the data that you want to collect for a flow using a monitor. The monitor combines the flow record and exporter with the Flexible NetFlow cache information.

Microflow policing associates a 2-color 1-rate policer and related drop statistics to each flow present in the NetFlow table. When the flow mask comprises all packet fields, this functionality is known as microflow policing. When the flow mask comprises either source or destination only, this functionality is known as user-based rate limiting.

Voice and video flows are full flow mask-based entries. The ASIC provides the flexibility to program the policer parameters, share policers across multiple flows and rewrite the IP address and Layer 4 port numbers of these flows.

Reflexive ACLs allow IP packets to be filtered based on upper-layer session information. The ACLs allow outbound traffic and limit inbound traffic in response to the sessions that originate inside the trusted network. The reflexive ACLs are transparent to the filtering mechanism until a data packet that matches the reflexive entry activates it. At this time, a temporary ACL entry is created and added to the IP-named access lists. The information obtained from the data packet to generate the reflexive ACL entry is permit/deny bit, the source IP address and port, the destination IP address, port, and the protocol type. During reflexive ACL entry evaluation, if the protocol type is either TCP or UDP, then the port information must match exactly. For other protocols, there is no port information to match. After this ACL is installed, the firewall is then opened for the reply packets to pass through. At this time, a potential hacker could have access to the network behind the firewall. To narrow this window, an idle timeout period can be defined. However, in the case of TCP, if two FIN bits or an RST is detected, the ACL entry can be removed.

Flexible NetFlow allows you to understand network behavior with more efficiency, with specific flow information tailored for various services used in the network. The following are some example applications for a Flexible NetFlow feature:

The figure below is an example of how Flexible NetFlow might be deployed in a network.

Flexible NetFlow consists of components that can be used together in several variations to perform traffic analysis and data export. The user-defined flow records and the component structure of Flexible NetFlow facilitates the creation of various configurations for traffic analysis and data export on a networking device with a minimum number of configuration commands. Each flow monitor can have a unique combination of flow record, flow exporter, and cache type. If you change a parameter such as the destination IP address for a flow exporter, it is automatically changed for all the flow monitors that use the flow exporter. The same flow monitor can be used in conjunction with different flow samplers to sample the same type of network traffic at different rates on different interfaces. The following sections provide more information on Flexible NetFlow components:

A flow record defines the keys that Flexible NetFlow uses to identify packets in the flow, as well as other fields of interest that Flexible NetFlow gathers for the flow. You can define a flow record with any combination of keys and fields of interest. The switch supports a rich set of keys. A flow record also defines the types of counters gathered per flow. You can configure 64-bit packet or byte counters. The switch enables the following match fields as the defaults when you create a flow record:

The predefined records ensure backward compatibility with your existing NetFlow collector configurations for the data that is exported. Each of the predefined records has a unique combination of key and nonkey fields that offer you the built-in ability to monitor various types of traffic in your network without customizing Flexible NetFlow on your router.

Internet Protocol Flow Information Export (IPFIX) or version 10 is an Export Protocol that collects and exports predefined or user defined flow records. IPFIX is an IETF standard based on NetFlow version 9. The IPFIX format maintains the same principles of separate templates and records as NetFlow version 9. It supports variable length field for SSID of the wireless clients. For IPFIX exporting protocol, the default destination port is 4739, DSCP value is 0, and TTL is 255.

The basic output of NetFlow is a flow record. Several different formats for flow records have evolved as NetFlow has matured. The most recent evolution of the NetFlow export format is known as Version 9. The distinguishing feature of the NetFlow Version 9 export format is that it is template-based. Templates provide an extensible design to the record format, a feature that should allow future enhancements to NetFlow services without requiring concurrent changes to the basic flow-record format. Using templates provides several key benefits:

NetFlow Version 9 will periodically export the template data so the NetFlow collector will understand what data is to be sent and also export the data flow set for the template. The key advantage to Flexible NetFlow is that the user configures a flow record, which is effectively converted to a Version 9 template and then forwarded to the collector. The figure below is a detailed example of the NetFlow Version 9 export format, including the header, template flow, and data flow sets. 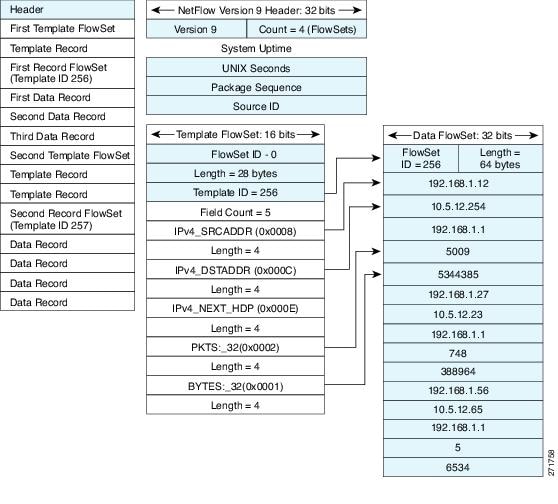 Flow monitors are the Flexible NetFlow component that is applied to interfaces to perform network traffic monitoring.

Flow monitors consist of a user-defined record, an optional flow exporter, and a cache that is automatically created at the time the flow monitor is applied to the first interface.

Flow data is collected from the network traffic and added to the flow monitor cache during the monitoring process based on the key and nonkey fields in the flow record. 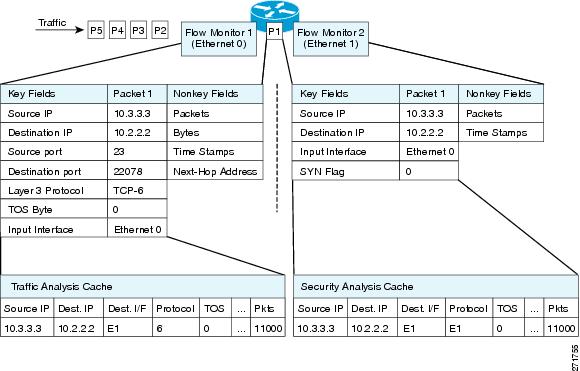 The figure below shows a more complex example of how you can apply different types of flow monitors with custom records. 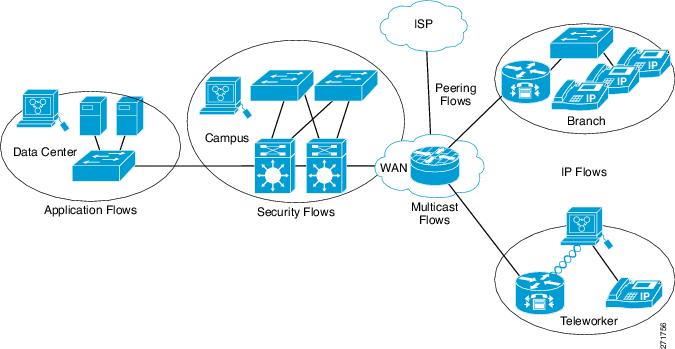 The default cache type is “normal”. In this mode, the entries in the cache are aged out according to the timeout active and timeout inactive settings. When a cache entry is aged out, it is removed from the cache and exported via any exporters configured.

Flow samplers are created as separate components in a router’s configuration. Flow samplers are used to reduce the load on the device that is running Flexible NetFlow by limiting the number of packets that are selected for analysis.

Samplers use random sampling techniques (modes); that is, a randomly selected sampling position is used each time a sample is taken.

Samplers are combined with flow monitors when they are applied to an interface with the ip flow monitor command.

The following table lists the Flexible NetFlow default settings for the switch.

How to Configure Flexible NetFlow

Perform this task to configure a customized flow record.

6.    Repeat Step 5 as required to configure additional key fields for the record.

9.    Repeat the above step as required to configure additional nonkey fields for the record.

You can create a flow export to define the export parameters for a flow.

Define a flow monitor based on the flow record and flow exporter.

Perform this required task to create a customized flow monitor.

Each flow monitor has a separate cache assigned to it. Each flow monitor requires a record to define the contents and layout of its cache entries. These record formats can be one of the predefined formats or a user-defined format. An advanced user can create a customized format using the flow record command.

7.    Repeat Step 6 as required to finish modifying the cache parameters for this flow monitor.

Perform this required task to configure and enable a flow sampler.

Applying a Flow to an Interface

You can apply a flow monitor and an optional sampler to an interface.

Configuring a Bridged NetFlow on a VLAN

You can apply a flow monitor and an optional sampler to a VLAN.

You can define Layer 2 keys in Flexible NetFlow records that you can use to capture flows in Layer 2 interfaces.

This example shows how to create a flow and apply it to an interface:

The following example shows how to configure IPv6 Flexible NetFlow on WLAN in both directions: