This chapter provides these topics about the Catalyst 3750 switch software:

The Catalyst 3750 switches are shipped with either of these software images installed:

Unless otherwise noted, all features described in this chapter and in this guide are supported on both SMI and EMI.

The Catalyst 3750 switches have these features:

Simplifying and minimizing switch, switch stack, and switch cluster management through a supported web browser from anywhere in your intranet.

Interactive guide mode that guides you in configuring complex features such as VLANs, access control lists (ACLs), and quality of service (QoS).

Automated configuration wizards that prompt you to provide only the minimum required information to configure complex features such as QoS priorities for video traffic, priority levels for data applications, and security.

Viewing a topology of interconnected devices to identify existing switch clusters and eligible switches that can join a cluster and to identify link information between switches.

Monitoring real-time status of a switch or multiple switches from the LEDs on the front-panel images. The system, redundant power system (RPS), and port LED colors on the images are similar to those used on the physical LEDs.

Connecting up to nine switches through their StackWise ports and operating as a single switch or switch-router in the network.

Creating a bidirectional 32-Gbps switching fabric across the switch stack, where all stack members have full access to the system bandwidth.

Automatic IOS version-check of new stack members with the option to automatically load images from the stack master or from a Trivial File Transfer Protocol (TFTP) server.

Adding, removing, and replacing switches in the stack without disrupting the operation of the stack.

Automatic discovery of candidate switches and creation of clusters of up to 16 switches that can be managed through a single IP address.

Extended discovery of cluster candidates that are not directly connected to the command switch.

IEEE 802.3X flow control on all ports (the switch does not send pause frames)

Up to 32 Gbps of forwarding rates in a switch stack

EtherChannel for enhanced fault tolerance and for providing up to 8 Gbps (Gigabit EtherChannel) or 800 Mbps (Fast EtherChannel) full duplex of bandwidth between switches, routers, and servers

CMS—CMS is a graphical user interface that can be launched from anywhere in your network through a web browser such as Netscape Communicator or Microsoft Internet Explorer. CMS is already installed on the switch. For more information about CMS, see "Getting Started with CMS."

CLI—The switch IOS command-line interface software is enhanced to support desktop- and multilayer-switching features. You can access the CLI either by connecting your management station directly to the switch console port or by using Telnet from a remote management station. You can manage the switch stack by connecting to the console port of any stack member. For more information about the CLI, see "Using the Command-Line Interface."

SNMP—You can use Simple Network Management Protocol (SNMP) management applications such as CiscoWorks2000 LAN Management Suite (LMS) and HP OpenView. You can manage from an SNMP-compatible management station that is running platforms such as HP OpenView or SunNet Manager. The switch supports a comprehensive set of MIB extensions and four remote monitoring (RMON) groups. For more information about using SNMP, see "Configuring SNMP."

For additional descriptions of the management interfaces, see the "Network Configuration Examples" section.

The newly elected stack master begins accepting Layer 2 traffic in less than 1 second and Layer 3 traffic between 3 to 5 seconds.

Cross-stack EtherChannel for providing redundant links across the switch stack

Up to 128 spanning-tree instances supported

Support for up to 1005 VLANs for assigning users to VLANs associated with appropriate network resources, traffic patterns, and bandwidth

Inter-Switch Link (ISL) and IEEE 802.1Q trunking encapsulation on all ports for network moves, adds, and changes; management and control of broadcast and multicast traffic; and network security by establishing VLAN groups for high-security users and network resources

Multilevel security for a choice of security level, notification, and resulting actions

Remote Authentication Dial-In User Service (RADIUS) for verifying the identity of, granting access to, and tracking the actions of remote users through authentication, authorization, and accounting (AAA) services.

IP type-of-service/Differentiated Services Code Point (IP TOS/DSCP) and 802.1P CoS marking priorities on a per-port basis for protecting the performance of mission-critical applications

IP TOS/DSCP and 802.1P CoS marking based on flow-based packet classification (classification based on information in the MAC, IP, and TCP/UDP headers) for high-performance quality of service at the network edge, allowing for differentiated service levels for different types of network traffic and for prioritizing mission-critical traffic in the network

Trusted port states (CoS, DSCP, and IP precedence) within a QoS domain and with a port bordering another QoS domain

The switch is designed for plug-and-play operation, requiring only that you assign basic IP information to the switch and connect it to the other devices in your network. If you have specific network needs, you can change the interface-specific and system- and stack-wide settings.

If you do not configure the switch at all, the switch operates with the default settings listed in Table 1-1. This table lists the key software features, their defaults, and where to find more information about the features.

For information about setting up the initial switch configuration and assigning basic IP information to the switch, refer to the hardware installation guide.

This section provides network configuration concepts and includes examples of using the switch to create dedicated network segments and interconnecting the segments through Fast Ethernet and Gigabit Ethernet connections.

Design Concepts for Using the Switch

Table 1-2 describes what can cause network performance to degrade and how you can configure your network to increase the bandwidth available to your network users.


Bandwidth alone is not the only consideration when designing your network. As your network traffic profiles evolve, consider providing network services that can support applications for voice and data integration, multimedia integration, application prioritization, and security. Table 1-3 describes some network demands and how you can meet those demands.


You can use the switches and switch stacks to create the following:

Cost-effective wiring closet (Figure 1-1)—A cost-effective way to connect many users to the wiring closet is to have a switch stack of up to nine Catalyst 3750 switches. To preserve switch connectivity if one switch in the stack fails, connect the switches as recommended in the hardware installation guide, and enable either cross-stack Etherchannel or cross-stack UplinkFast.

You can have redundant uplink connections, using small form-factor pluggable (SFP) modules in the switch stack to a Gigabit backbone switch, such as a Catalyst 4500 or Catalyst 3750G Gigabit switch. You can also create backup paths by using Fast Ethernet, Gigabit, or EtherChannel links. If one of the redundant connections fails, the other can serve as a backup path. If the Gigabit switch is cluster-capable, you can configure it and the switch stack as a switch cluster to manage them through a single IP address. The Gigabit switch can be connected to a Gigabit server through a 1000BASE-T connection. 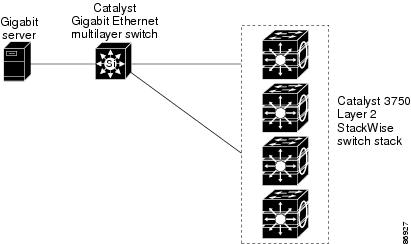 High-performance wiring closet (Figure 1-2) —For high-speed access to network resources, you can use Catalyst 3750 switches and switch stacks in the access layer to provide Gigabit Ethernet to the desktop. To prevent congestion, use QoS DSCP marking priorities on these switches. For high-speed IP forwarding at the distribution layer, connect the switches in the access layer to a Gigabit multilayer switch in the backbone, such as a Catalyst 4500 Gigabit switch or Catalyst 6500 Gigabit switch.

Each switch in this configuration provides users with a dedicated 1-Gbps connection to network resources. Using SFP modules also provides flexibility in media and distance options through fiber-optic connections. 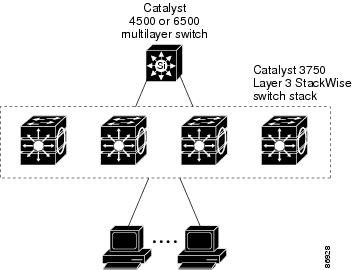 Server aggregation (Figure 1-3) and Linux server cluster (Figure 1-4)—You can use the switches and switch stacks to interconnect groups of servers, centralizing physical security and administration of your network. For high-speed IP forwarding at the distribution layer, connect the switches in the access layer to multilayer switches with routing capability. The Gigabit interconnections minimize latency in the data flow.

QoS and policing on the switches provide preferential treatment for certain data streams, if required. They segment traffic streams into different paths for processing. Security features on the switch ensure rapid handling of packets.

Dual homing of servers to dual switch stacks with redundant Gigabit EtherChannel and cross-stack EtherChannel provide fault tolerance from the server racks to the core.

The various lengths of stack cable available, ranging from 0.5 meter to 3 meters provide extended connections to the switch stacks the stack across multiple server racks, for multiple stack aggregation. 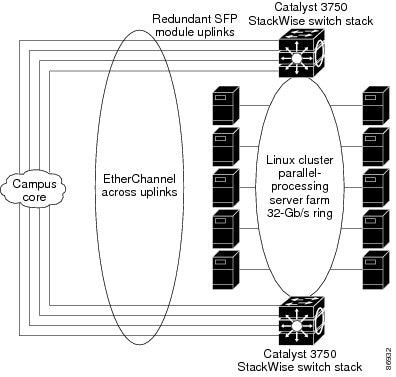 Figure 1-5 shows a configuration for a network of up to 500 employees. This network uses a Layer 3 Catalyst 3750 switch stack with high-speed uplinks to two routers. For network reliability and load balancing, this network has HSRP enabled on the routers and on the switch stack. This ensures connectivity to the Internet, WAN, and mission-critical network resources in case one of the routers or switches fails. The switch stack is using routed uplinks for faster failover. It is also configured with equal-cost routing for load sharing and redundancy. (A Layer 2 switch stack can use cross-stack EtherChannel for load sharing.)

When an end station in one VLAN needs to communicate with an end station in another VLAN, a router or multilayer switch routes the traffic to the appropriate destination VLAN. In this network, the switch stack is providing inter-VLAN routing. VLAN access control lists (VLAN maps) on the switch stack provide intra-VLAN security and prevent unauthorized users from accessing critical pieces of the network. 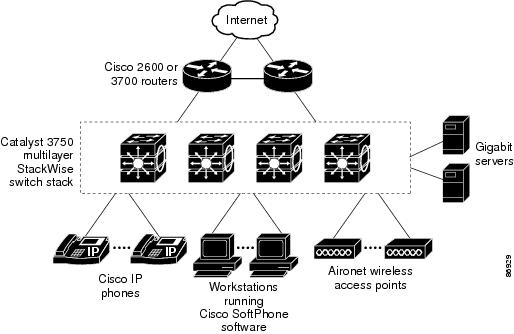 In the wiring closet, each switch stack has IGMP snooping enabled to efficiently forward multimedia and multicast traffic. QoS ACLs that either drop or mark nonconforming traffic based on bandwidth limits are also configured on each switch stack. VLAN maps provide intra-VLAN security and prevent unauthorized users from accessing critical pieces of the network. QoS features can limit bandwidth on a per-port or per-user basis. The switch ports are configured as either trusted or untrusted. You can configure a trusted port to trust the CoS value, the DSCP value, or the IP precedence. If you configure the port as untrusted, you can use an ACL to mark the frame in accordance with the network policy.

Each switch stack provides inter-VLAN routing. They provide proxy ARP services to determine IP and MAC address mapping, thereby removing this task from the routers and decreasing this type of traffic on the WAN links. These switch stacks also have redundant uplink connections to the backbone switches, with each uplink port configured as a trusted routed uplink to provide faster convergence in case of an uplink failure.

The routers and backbone switches have HSRP enabled for load balancing and redundant connectivity to guarantee mission-critical traffic. 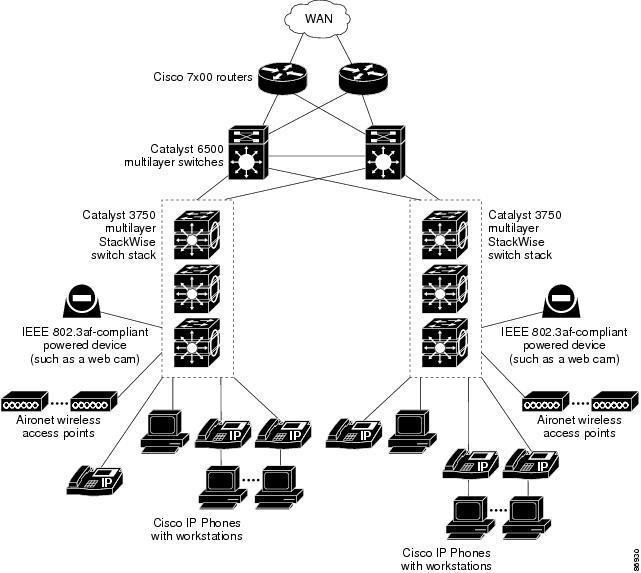 Before configuring the switch, review these sections for start up information:

"Getting Started with CMS"