PowerOn Auto Provisioning (POAP) automates the process of upgrading software images and installing configuration files on Cisco Nexus switches that are being deployed in the network for the first time.

When a Cisco Nexus Series switch with the POAP feature boots and does not find the startup configuration, the switch enters POAP mode and checks for a USB device containing the configuration script file. If it finds one, it checks that device to see if it also contains the software image files and the switch configuration file. 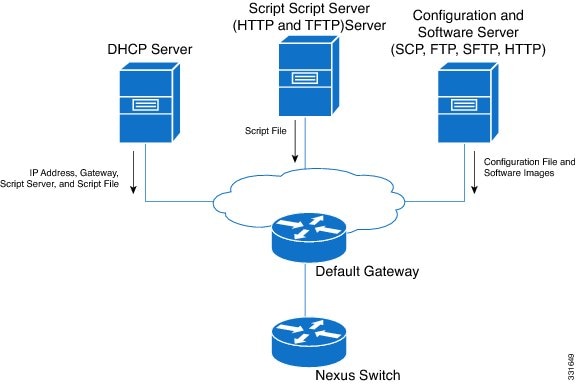 The reference script supplied by Cisco supports the following functionality:

We provide sample configuration scripts that were developed using the Python programming language and Tool Command Language (Tcl). You can customize one of these scripts to meet the requirements of your network environment.

For information about customizing this script using Python, see the Cisco NX-OS Python API Reference Guide for your platform.

The POAP process has the following phases:

Within these phases, other process and decision points occur. The following illustration shows a flow diagram of the POAP process. 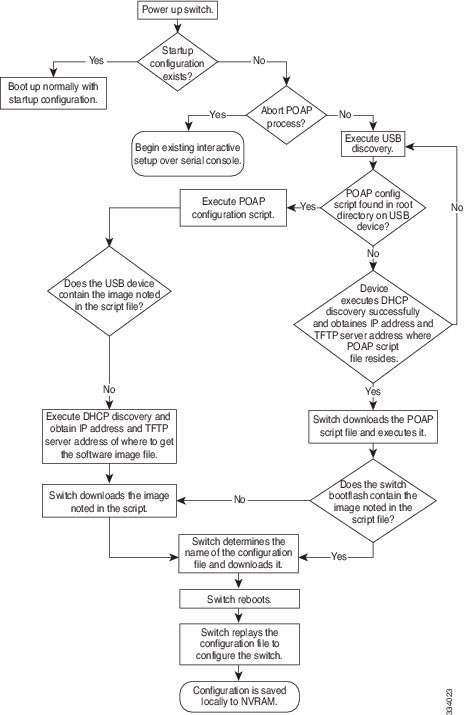 During startup, a prompt appears asking if you want to abort POAP and continue with normal setup. You can choose to exit or continue with POAP.

If you exit POAP mode, you enter the normal interactive setup script. If you continue in POAP mode, all the front-panel interfaces are set up in Layer 2 mode, which ensures that the device does not participate in any Layer 2 forwarding.

When multiple DHCP offers that meet the requirement are received, an offer is randomly chosen. The device completes the DHCP negotiation (request and acknowledgment) with the selected DHCP server, and the DHCP server assigns an IP address to the switch. If there is a failure in any of the subsequent steps in the POAP process, the IP address is released back to the DHCP server.

If no DHCP offers meet the requirements, the switch does not complete the DHCP negotiation (request and acknowledgment) and an IP address is not assigned. The POAP process is reinitiated until it succeeds or you manually abort the POAP process.

Once the device has bootstrapped itself using the information in the DHCP acknowledgement, the switch downloads the script file from the TFTP server or the HTTP server.

To download a configuration file based on the hostname of the switch, you must configure the following:

The switch can use the MAC address of the mgmt 0 interface or of a single Layer 3 interface on the front panel to select the configuration file to be downloaded.

Guidelines and Limitations for POAP

Setting Up the Network Environment To Use POAP

1.    Modify the basic configuration script provided by Cisco or create your own script. For information, see the Python Scripting and API Configuration Guide.

2.    (Optional) Put the POAP configuration script and any other desired software image and switch configuration files on a USB device accessible to the switch.

3.    Deploy a DHCP server and configure it with the interface, gateway, and TFTP server IP addresses and a bootfile with the path and name of the configuration script file. (This information is provided to the switch when it first boots.)

4.    Deploy a TFTP or HTTP server to host the configuration script.

5.    Deploy one or more servers to host the software images and configuration files.

Make sure that the network environment is set up to use POAP. For more information, see the Setting Up the Network Environment To Use POAP section immediately preceding this section.

1.    Install the switch in the network.

To verify the configuration after bootstrapping the device using POAP, use one of the following commands:

For detailed information about the fields in the output from these commands, see the Cisco Nexus command reference for your device.