This chapter describes how to configure FabricPath on the Cisco Nexus 5500 Series devices.

Guidelines and Limitations of FabricPath

Migrating to a vPC+ Environment

FabricPath switching is not supported on the Cisco Nexus 5000 Series devices.

FabricPath encapsulation facilitates MAC address mobility and server virtualization, which means that you can physically move the Layer 2 node but retain the same MAC address and VLAN association for the virtual machine. FabricPath also allows LAN extensions across datacenters at Layer 2, which is useful in disaster recovery operations, and clustering applications such as databases.

Finally, FabricPath is useful in high-performance, low-latency computing. With FabricPath, you use the Layer 2 Intermediate System-to-Intermediate System (IS-IS) protocol for a single control plane that functions for unicast, broadcast, and multicast packets. There is no need to run STP because the domain is purely Layer 2. This FabricPath Layer 2 IS-IS is a separate process from Layer 3 IS-IS.

Layer 2 Gateway Spanning Tree Protocol (L2G-STP) builds a loop-free tree topology. However, it has some limitations. One limitation is that the STP root must always (virtually) be in the FabricPath cloud. For example, it is not possible to have two FabricPath networks connected through a CE cloud. A bridge ID for STP consists of a MAC address and bridge priority. When running in FabricPath mode, the system automatically assigns the edge devices with the MAC address c84c.75fa.6000 from a pool of reserved MAC addresses. As a result, each device has the same MAC address used for the Bridge ID.

The devices that are in both the FabricPath domain and CE domain are considered to be edge devices or gateway devices. Edge ports have a FabricPath root guard-like function enabled implicitly. If a superior BPDU is received on an edge port, the port is placed in the Layer 2 Gateway inconsistent state until the condition is cleared.

As a best practice, you should configure all edge devices with the lowest STP priority of all devices in the STP domain to which they are attached. By setting all of the edge devices to be the root bridge, the entire FabricPath domain looks like one virtual bridge to the CE domain. The same recommendation applies to a virtual port channel+ (vPC+) domain; you must configure each device (primary and secondary) as the root.

You configure all FabricPath edge devices by manually setting the bridge priority lower than any STP bridge or by entering these commands.

The virtual port channel (vPC) feature was introduced on the Cisco Nexus 5000 Series platforms to provide two active paths, to eliminate the need to run the STP protocol, and to have Active-Active redundancy. vPCs are mainly used for servers that can do port channeling as well as connect to Cisco Nexus 2000 Fabric Extenders. vPCs are deployed in the CE domain. When you migrate to a FabricPath network, devices evolve from a vPC to a vPC+ design.

The vPC+ feature was introduced to allow interoperability between FabricPath and vPCs. The functionality and behavior of a vPC+ and a vPC is identical. The same rules apply in both technologies. That is, both require peer link and peer keepalive messages, the configurations must match between the vPC peers, and consistency checks still take place. In a vPC+ domain, a unique FabricPath switch ID is configured and the peer link is configured as a FabricPath core port. This FabricPath switch ID under the vPC+ domain is called the Emulated switch ID. The Emulated switch ID must be the same between the two peers and must be unique per vPC+.

The benefits of using a vPC+ at the edge of a domain are as follows:

Allows you to attach other CE devices in vPC mode

Prevents orphan ports in a failure scenario. When a peer link fails in the vPC+ domain, the orphan port still has FabricPath uplinks for communication.

Moving from an existing vPC to vPC+ is disruptive to the performance of your network during the migration period. We recommend that you schedule a maintenance window when doing this migration.

A device can be part of a VPC domain or VPC+ domain, but not both domains. When the peer link is a FabricPath core port, all VLANs that traverse the peer link must be FabricPath VLANs see Figure 1-3. 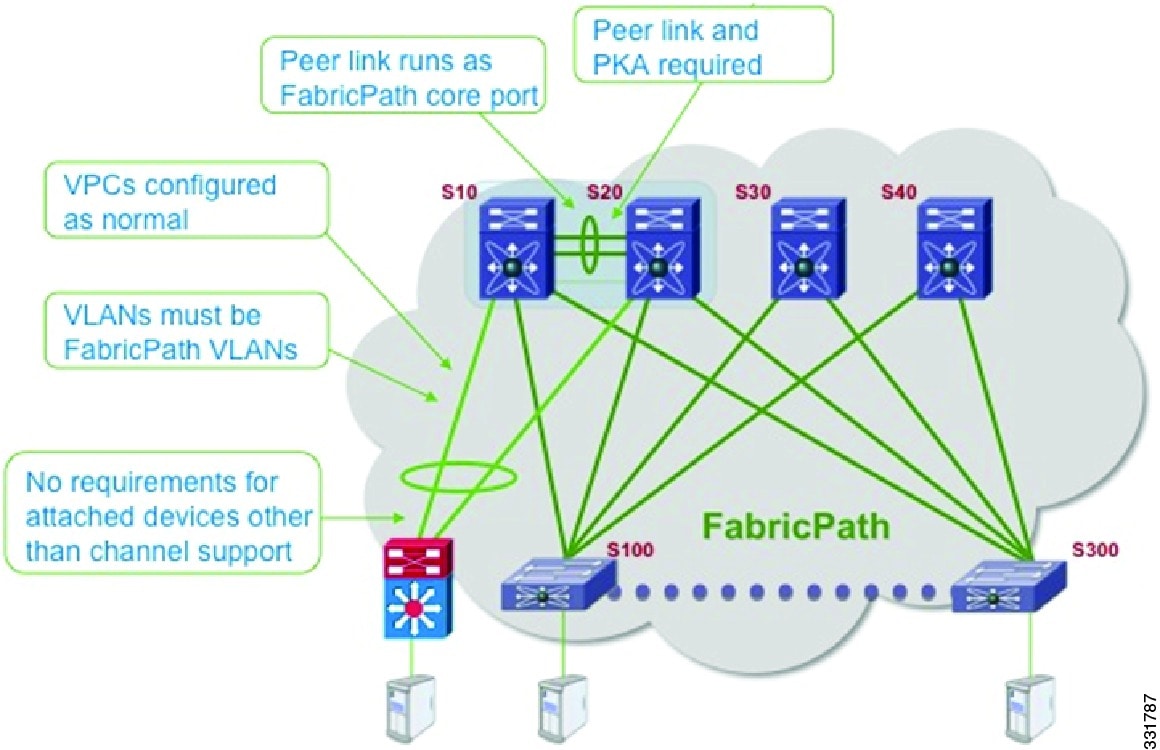 After the peer link has been configured with switchport mode fabricpath, it becomes part of the FabricPath topology see Figure 1-4. After a link is detected in a FabricPath topology, the metric of the link is verified and used towards the unicast routing table and the calculation of trees for multidestination traffic. To take advantage of the equal cost multipath (ECMP) paths that are available from edge to spine in the FabricPath topology, we recommend that you increase the IS-IS metric of the peer link to be lower so that it is not added as part of the multidestination tree.

The preferred path to any switch ID is calculated based on the metric to any given destination. The metric is as follows:

You must verify the metric of the links.

This example shows how to display the FabricPath interface information:

Because the peer link is a port channel, the metric will be the lowest cost. As a best practice, you should increase the metric so it is higher than the rest of the ECMP links that are part of the FabricPath cloud.

This example shows how to display the FabricPath metric:

When FabricPath is enabled globally, each device is atomatically assigned with a switch ID (12 bits) You have the option to manually configure the switch ID, but you must ensure all devices in the FabricPath domain have unique values. The switch ID is encoded in the outer MAC addresses of the FabricPath MAC-in-MAC frames.

This example shows how to display and manually configure the switch ID:

In conversational MAC learning the device learns MAC addresses only if there is an active conversation between a local MAC and a remote MAC (bidirectional traffic) see Figure 1-5. By default, conversational MAC learning is enabled for all FabricPath VLANs. All CE VLANs learn MAC addresses the traditional (CE) way. The default MAC address aging times for both CE and FabricPath VLANs is 300 seconds. If Layer 3 is enabled, the ARP aging timer by default is 1500 seconds. When Layer 3 is enabled, you should set the MAC address aging timer to a higher value than the ARP table to avoid any unnecessary flooding. 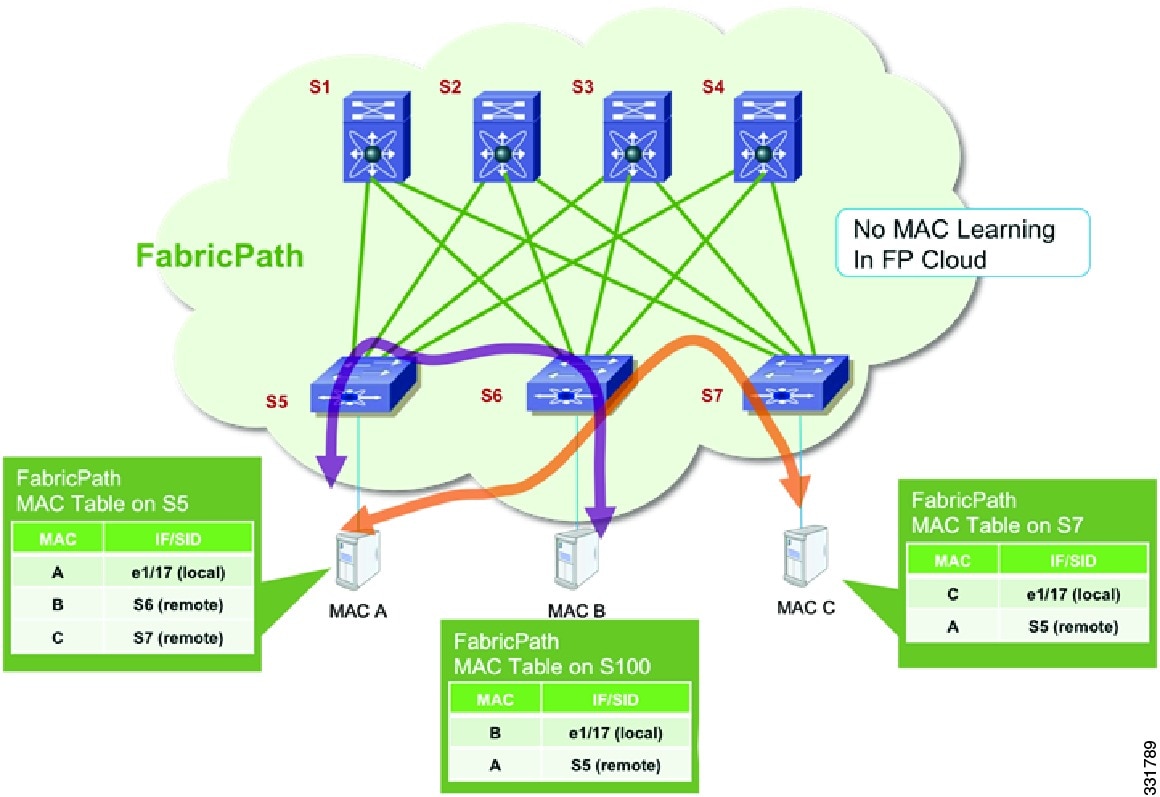 This example shows how to display the dynamic MAC address table for switches S5 through S7:

Guidelines and Limitations of FabricPath

FabricPath has the following configuration guidelines and limitations:

The Cisco Nexus 5000 Series device cannot be the STP root bridge or have any designated nonedge ports in the STP topology.

The Cisco Nexus 5000 Series device and the Cisco Nexus 2000 Fabric Extenders that are undergoing an ISSU must be a leaf on the spanning tree.

The CE and FabricPath topology should be in a stable state before undergoing an ISSU. In the FabricPath cloud, no additional devices, links or switch IDs should be added or removed during an ISSU. During an ISSU process, there should not be any broadcast or multicast root change.

You must exit the VLAN configuration mode for the VLAN mode change to take effect. When running a vPC+, the peer link is configured as a FabricPath core interface. To forward the VLANs downstream on a vPC, you must configure them as FabricPath VLANs and they must be reachable across the peer link.

This example shows how to display the configuration of the FabricPath VLANs:

In the current release of FabricPath, up to 16 equal cost paths are possible. The default load-balancing scheme for ECMP is a mixed mode (Layer 3 and Layer 4 ports).

This example shows how to display the FabricPath load-balancing configuration:

You can modify the variables by using the fabricpath load-balance unicast command.

This example shows how to configure all of the arguments that are available with this command:

Within the FabricPath network, the swtich elects a root node that becomes the root for the broadcast tree. That node also identifies another bridge to become the root for the second multidestination tree, which load balances the multicast traffic. In a unicast-only environment, Tree 1 or FTag1 is always used and is seen in all show commands.

The FabricPath network elects a single root device for the first (broadcast) multidestination tree in the topology. All FabricPath devices announce their root priority in the Router Capability TLV. The device with the highest priority value becomes the root for the tree. In the event of a tie, the FabricPath network chooses the device with the highest system ID, and if there is still a tie, then it uses the device with the highest switch ID. The broadcast root determines the roots of any additional multicast trees and announces them in the Router Capability TLV. Multicast roots spread among available devices to balance the load. The selection is based on the same criteria as described above.

As a best practice, we recommended that you manually define the spine devices that are the root of each tree.

This example shows how to configuration of two spine devices at the root of two trees:

This example shows how to display the multidestination trees for ftag 1 and 2:

Step 2 and Step 3 are independent steps and must be done in order to enable FabricPath successfully.

Enable FabricPath mode on the DCE core ports connected to the spine devices. 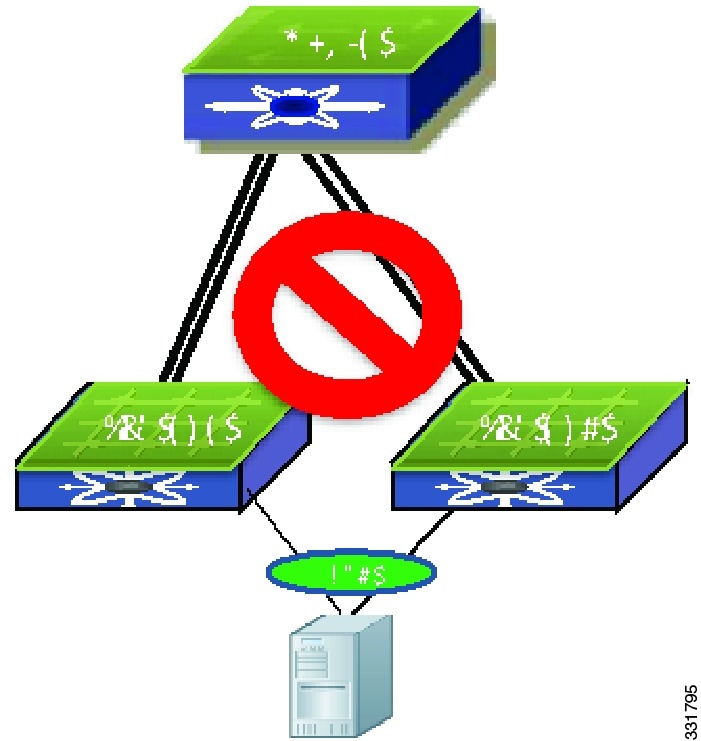 Verify that FabricPath is enabled on the core interfaces by using the show vlan id command.

Verify that the VLAN is in FabricPath mode.

Migrating to a vPC+ Environment

Create a Switch ID under the vPC domain

When you configure the peer keepalive link for vPC+, we recommend that you use the mgmt0 interface and management virtual routing and forwarding (VRF) instance. If a dedicated port is used, we recommend that you configure the front panel ports as part of a dedicated VRF (that is, when Layer 3 is enabled on the Cisco Nexus 5500 device) with a dedicated CE VLAN. The vPC+ keepalive messages must be transported between the primary vPC+ and secondary vPC+ across a dedicated link instead of going through the FabricPath cloud. In addition, if the Layer 3 functionality is enabled on the Cisco Nexus 5500 Series device, the keyword management must be configured under the corresponding SVI. To allow the SVI to remain up if the Layer 3 module fails.