This chapter describes how to configure the BGP Additional Paths allowing the advertisement of multiple paths through the same peering session for the same prefix without the new paths implicitly replacing any previous paths. This behavior promotes path diversity and reduces multi-exit discriminator (MED) oscillations.

This section describes in more detail how path hiding can occur. In the following figure, we have prefix p with paths p1 and p2 advertised from BR1 and BR4 to RR1. RR1 selects the bestpath of the two and then advertises to PE only p1. 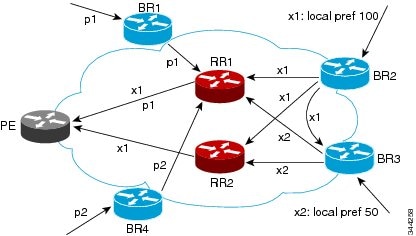 In the figure RR Hiding an Additional Path, we also see prefix x with path x1 being advertised from BR2 to BR3 (which has path x2) with local preference 100. BR3 also has path x2, but due to routing policy, BR3 will advertise to the RRs x1 (not shown) instead of x2, and x2 will be suppressed. A user could turn on the advertisement of best external on BR3 and thereby advertise x2 to the RRs, but, again, the RRs advertise only the best path.

In order to minimize internal transport costs, transit ISPs try to forward packets to the closest exit point (according to IGP cost). This behavior is known as hot-potato routing. In the distributed RR cluster model of the following figure, assume traffic coming from LA must go to Mexico. All links have the same IGP cost. If there are two exit points toward Mexico—one toward Austin and one toward Atlanta—the border router will try to send traffic to Austin based on the lower IGP cost from LA toward Austin than toward Atlanta. In a centralized RR model where the central RR resides where RR3 is (and RR1, RR2, RR4, and RR5 do not exist), the closest exit point toward Mexico, as seen from RR3, might be Atlanta. Sending the traffic from LA toward the Atlanta BR and thus resulting in suboptimal hot-potato routing is not desirable. 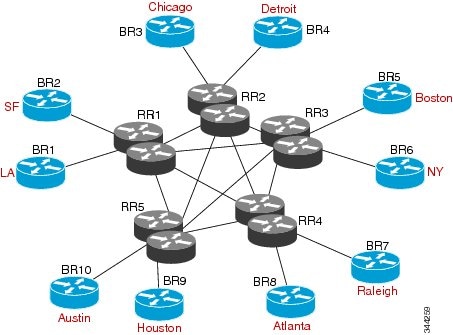 Only the best-path is advertised to peers unless you configure the set path-selection all advertise command which advertises all BGP paths as additional paths to peers if the receive capability is enabled.

Configuring BGP Additional Paths has the following guidelines and limitations:

Perform the following steps to specify whether the device can send and receive additional paths to and from all neighbors within an address family.

Ensure that you have enabled the BGP feature.

Perform the following steps to configure whether a particular neighbor can send or receive additional paths.

Ensure that you have enabled the BGP feature (see the Enabling the BGP Feature section).

In this configuration task, the capability to send and receive additional paths and the selection criteria are configured for the address family, and then the template is configured.

Ensure that you have enabled the BGP feature (see the Enabling the BGP Feature section).

You can optionally use a route map to filter the paths to be advertised by matching on the prefix of additional paths that are candidates to be advertised. (These prefixes are configured with the additional-paths selection command.)

You can also optionally set one or more actions to take for those paths that pass through the route map. This task happens to use the set metric command. Other set commands are available that are not shown in this task.

To display information about the BGP additional paths configuration, use the following commands:

Table below lists the release history for this feature.