As of Cisco SAN-OS Release 3.1(2) and later, you can use Cisco SAN device virtualization to create virtual devices that represent physical end-devices. Virtualization of SAN devices accelerates swapout or failover to a replacement disk array, and it also minimizes downtime when replacing host bus adapters (HBAs) or when rehosting an application on a different server.

SAN device virtualization enables you to: 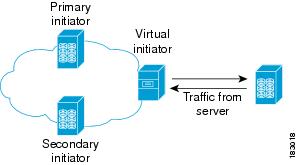 Typically, today’s deployments for handling device failures are designed for high availability (HA), with redundancy being a key part of this design. Consider the situation where a target is designed to be redundant. Two arrays are deployed–a primary and secondary in this situation. Enterprises often use some type of consistency technology (such as EMF SRDF) between the primary and secondary arrays to ensure that the secondary is a mirrored copy of the production LUN. However, if the primary array fails, it must be replaced by the secondary because all I/O must occur on the secondary array. Problems can occur because the time required to bring the secondary array up and have it working often takes longer than most can afford (Figure 1-3 illustrates this dilemma).

Figure 1-4 illustrates the benefits of SDV. In this configuration, disk array Y replaces disk array X. When disk array X was deployed, the user created virtual devices for all the Fibre Channel interfaces using SDV. After data replication from disk array X was completed, the user briefly pauses activity on the application server and relinked disk array Y to the virtual devices used by the server, completing the swapout of disk array X. No zoning changes or host operating system configuration changes were required during the time-critical period when the swap was performed; this significantly minimized application downtime. 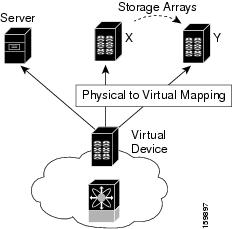 Whenever two fabrics merge, SDV merges its database. A merge conflict can occur when there is a run-time information conflict or configuration mismatch. Run-time conflicts can occur due to:

The SDV attributes configuration is supported in Cisco DCNM for SAN Release 4.1(2) and later.

This section includes the guidelines and limitations for this feature:

If SDV virtual initiators are configured, you will be unable to downgrade to SAN-OS Release 3.1(2).

This incompatibility only warns before a downgrade. We recommend that you remove the virtual initiator configuration or shut down the initiator port so that there are no inconsistencies in the downgraded version.

The following are downgrade scenarios when SDV LUN zoning is configured:

In each of these cases, a configuration check is registered to prevent users from downgrading to SAN-OS Release 3.1(2). This incompatibility will be disruptive if you proceed with the downgrade.

To avoid the configuration check, delete all the LUN zone members from SDV zones, and then activate the zone set before the downgrade.

SDV is a distributed service and uses Cisco Fabric Services (CFS) distribution to synchronize the databases. When you configure SDV, it starts a CFS session and locks the fabric. When a fabric is locked, Cisco NX-OS software does not allow any configuration changes from a switch other than the switch holding the lock and issues a message to inform users about the locked status. Configuration changes are held in a pending database for the application. You must perform a commit operation to make the configuration active and to release the lock for all switches.

To configure a virtual target and commit it to the fabric configuration, follow these steps:

Expand SAN in the Logical Domains pane, and then expand the fabric in which your VSAN resides.

Expand the VSAN in which you want to create the virtual target and select SDV. You see the switches in the VSAN that you selected listed in the Information pane.

In the Control tab, select enable from the drop-down menu in the Command column to enable SAN device virtualization for a particular switch in the VSAN. 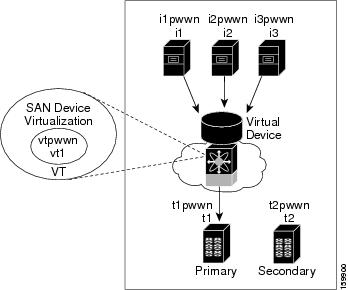 Configuring a Zone for a Virtual Device

This configuration process does not support interoperability. If you are working in interop-VSANs, we recommend that you configure the zone directly using the system-assigned pWWN of the virtual device. 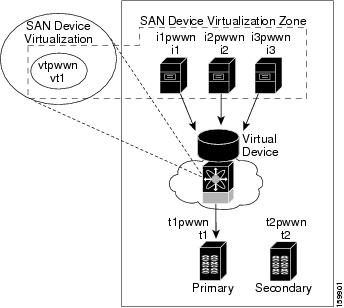 SDV is enabled on a switch and a virtual device is defined. SDV assigns a pWWN for the virtual device, and it is zoned based on the pWWN in a zone. If you later disable SDV, this configuration is lost. If you reenable SDV and create the virtual device using the same name, there is no guarantee that it will get the same pWWN again. You would have to rezone the pWWN-based zone. However, if you perform zoning based on the device-alias name, there are no configuration changes required if or when the pWWN changes.

To link a virtual target with a physical target, follow these steps:

Select the Virtual Device ID from the pull-down list or enter an existing ID for the virtual target that you are linking with a physical target.

Click either the primary or secondary radio button for the Map Type.

At any time, you can discard the uncommitted changes to the running configuration and release the fabric lock (prior to entering the sdv commit command). If you discard the pending changes, the configuration remains unaffected and the lock is released.

The pending database is only available in the volatile directory and is subject to being discarded if the switch is restarted.

This section displays the field descriptions for this feature.