Microloops may or may not result in traffic loss. If the duration of a microloop is short, that is the network converges quickly, packets may loop for a short duration before their time-to-live (TTL) expires. Eventually, the packets get forwarded to the destination. If the duration of the microloop is long, that is one of the routers in the network is slow to converge, packets may expire their TTL or the packet rate may exceed the bandwidth, or the packets might be out of order, and packets may get dropped. 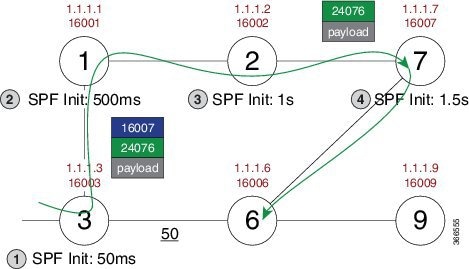 So, the SR path enables a packet from Node 3 reaches its destination Node 9, without the risk of microloop until the network converges. Finally, Node 3 updates the FIB for the new path.

Use the show isis private command to check if the repair path exists or not.

Use the show ip ospf segment-routing microloop-avoidance command to check if the repair path exists or not.