The path computation element protocol (PCEP) describes a set of procedures by which a path computation client (PCC) can report and delegate control of head-end label switched paths (LSPs) sourced from the PCC to a PCE peer. The PCE can request the PCC to update and modify parameters of LSPs it controls. The stateful model also enables a PCC to allow the PCE to initiate computations allowing the PCE to perform network-wide orchestration.

SR-PCE learns topology information by way of IGP (OSPF or IS-IS) or through BGP Link-State (BGP-LS).

SR-PCE is capable of computing paths using the following methods:

TCP-AO is compatible with Master Key Tuple (MKT) configuration. TCP-AO also protects connections when using the same MKT across repeated instances of a connection. TCP-AO protects the connections by using traffic key that are derived from the MKT, and then coordinates changes between the endpoints.

This task explains how to configure SR-PCE.

The Cisco IOS XRv 9000 is the recommended platform to act as the SR-PCE.

This task explains how to configure the SR-PCE to compute disjointness for a pair of LSPs signaled by PCCs that do not include the PCEP association group-ID object in their PCEP request. This can be beneficial for deployments where PCCs do not support this PCEP object or when the network operator prefers to manage the LSP disjoint configuration centrally.

An SR-TE policy can be configured on the path computation element (PCE) to reduce link congestion or to minimize the number of network touch points.

To minimize the number of network touch points, an application, such as a Network Services Orchestrator (NSO), can request the PCE to create an SR-TE policy. PCE deploys the SR-TE policy using PCC-PCE communication protocol (PCEP).

You can achieve high-availability by configuring multiple PCEs with SR-TE policies. If the head-end (PCC) loses connectivity with one PCE, another PCE can assume control of the SR-TE policy.

To configure a PCE-initiated SR-TE policy, you must complete the following configurations:

For example, considering a multi-domain topology (Domain 1 and Domain 2), the following scenarios meet the requirements listed above:

PCE protocol (PCEP) (RFC5440) is a client-server model running over TCP/IP, where the server (PCE) opens a port and the clients (PCC) initiate connections. After the peers establish a TCP connection, they create a PCE session on top of it.

To apply an ACL to the PCE, use the pce peer-filter ipv4 access-list acl_name command.

The following example shows how to configure an ACL and apply it to the PCE:

This feature allows the SR-TE head-end or SR-PCE to compute a path that is encoded using Anycast prefix SIDs of nodes along the path.

An Anycast SID is a type of prefix SID that identifies a set of nodes and is configured with n-flag clear. The set of nodes (Anycast group) is configured to advertise a shared prefix address and prefix SID. Anycast routing enables the steering of traffic toward multiple advertising nodes, providing load-balancing and redundancy. Packets addressed to an Anycast address are forwarded to the topologically nearest nodes.

This example shows how Anycast SIDs are inserted into a computed SID list. 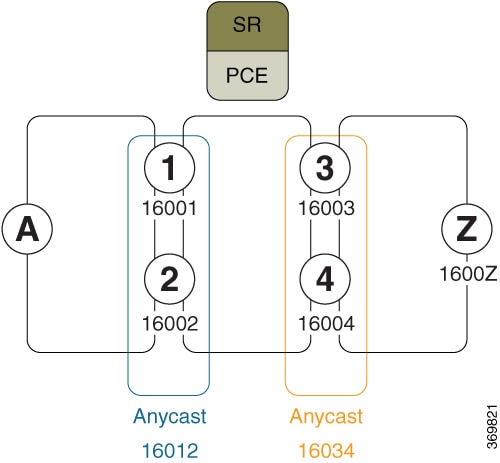 Consider the case where nodes A and Z are provider edge (PE) routers in the same VPN. Node A receives a VPN route with BGP next-hop to node Z. Node A resolves the SR path to node Z based on ODN behaviors with delegation of path computation to SR-PCE.

Before considering Anycast SIDs, the head-end router or SR-PCE computes the SID list.

When an Anycast SID-aware path is requested, the path computation algorithm performs the following:

The following figure depicts cumulative metrics between nodes in the network. 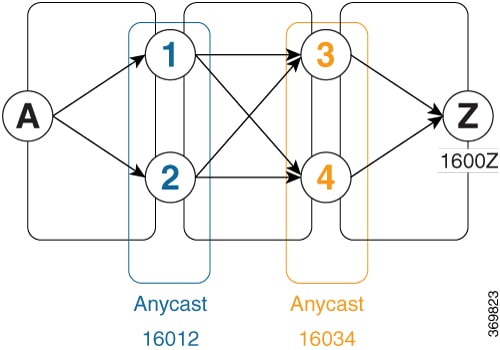 The Anycast SID aware path computation also provides resiliency. For example, if one of the ABRs (in this case, ABR 1) becomes unavailable or unreachable, the path from node A to node Z {16012,16034,1600Z} will still be valid and usable. 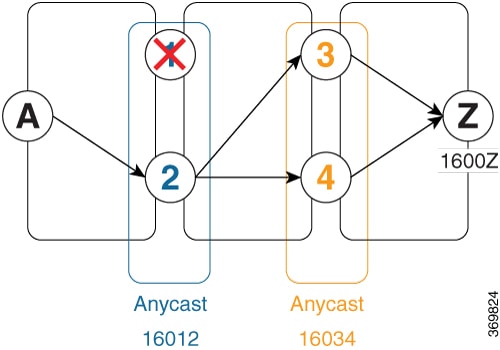 Use the anycast-sid-inclusion command to request Anycast SID-aware path computation for the following SR policy types:

Weighted Anycast nodes advertise a cost along with the Anycast SID. This cost serves as a weight. The native SR path computation algorithms are augmented to compute optimum paths relying on Weighted Anycast SIDs during path encoding. Traffic to the SID is then distributed according to the weights.

This feature allows IPv4 unnumbered interfaces to be part of an SR-PCE topology database.

This feature provides enhancements to the following components:

The following example shows how to configure an IPv4 unnumbered interface:

Use the show ipv4 interface command to display information about the interface:

This interface shows the IPv4 address of Loopback0.

Use the show snmp interface command to find the SNMP index for this interface:

Use the show ospf neighbor command to display the adjacency:

The output of the show pce ipv4 topology command is enhanced to display the interface index instead of the IP address for unnumbered interfaces:

This feature adds new functionality to the SR-PCE that enables it to compute a path for remote non-SR end-point device distributed by BGP-LU.

The following topology shows an SR domain and a BGP-LU domain, with a gateway ABR/ASBR between the two domains.

If there are multiple ABR/ASBRs advertising the same remote BGP-LU prefix, the SR-PCE selects the best gateway node to the BGP-LU domain using the accumulative metric from the head-end device to the gateway and the advertised metric from the gateway to the destination. 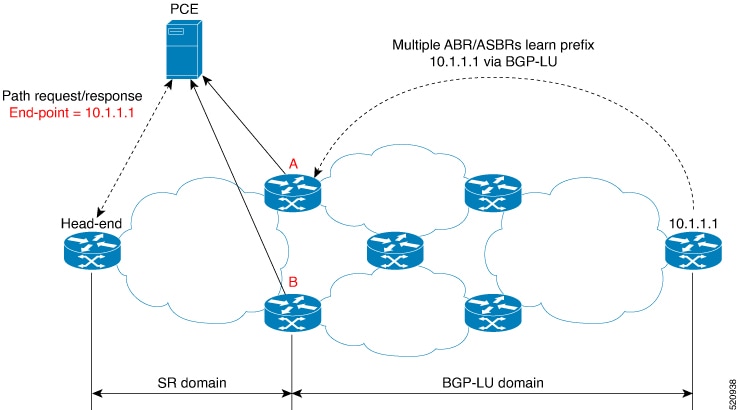 The following examples show the configurations for the IGP helper, BGP-LU, and proxy BGP-SR:

Configuration on the End-Point Device

Configuration on the Gateway ABR/ASBR

1. Configure the remote prefix set and create the route policy for the BGP-LU domain:

2. Configure the helper IGP instance on the Loopback interface:

Configuring the North-Bound API on SR-PCE

The SR-PCE provides a north-bound HTTP-based API to allow communication between SR-PCE and external clients and applications.

Over this API, an external application can leverage the SR-PCE for topology discovery, SR policy discovery, and SR policy instantiation.

Use the following commands under PCE configuration mode to configure the API to allow communication between SR-PCE and external clients or applications.

The first and fourth entries show the API server listening for IPv4 and IPv6 connections.