This chapter tells how to install or upgrade memory and how to install a Virtual Private Network (VPN) module in your Cisco 815 integrated services router and includes the following sections:

Installing and Removing a DIMM

During this procedure, wear grounding wrist straps to avoid ESD damage to the router. Do not directly touch the backplane with your hand or any metal tool, or you could shock yourself.

Before working on a system that has an on/off switch, turn OFF the power and unplug the power cord.

Do not work on the system or connect or disconnect cables during periods of lightning activity.

Read the installation instructions before you connect the system to its power source.

Hazardous network voltages are present in WAN ports regardless of whether power to the router is OFF or ON. To avoid electric shock, use caution when working near WAN ports. When detaching cables, detach the end away from the router first.

In order to upgrade the Cisco 815 integrated services router memory, you must open the chassis. Opening the chassis requires a number one Phillips screwdriver.

Make sure the router is turned off and is disconnected from the power supply.

Turn the router upside down, and rest the top of the router on a flat surface.

Use the number one Phillips screwdriver to remove the four screws that fasten the top and bottom of the chassis together, as shown in Figure C-1. Holding the router assembly together, turn the router back to its original position.

Place the router bottom on an antistatic mat, and begin installing memory.

Figure C-2 shows where to find the slots for a dual in-line memory module (DIMM) and a VPN module on the router motherboard. Installing and Removing a DIMM

You can install a DIMM to increase the amount of dynamic random-access memory (DRAM) in the router.

Follow these steps to remove a DIMM on the router motherboard:

Pull the latches away from the DIMM at both ends. This lifts the DIMM slightly. Lift the DIMM completely out of the connector. See Figure C-4.

Place the DIMM in an antistatic bag to protect it from ESD damage.

Do not insert DIMMs into the same connector more than 25 times. Overuse can damage the connector.

Make sure that both latches on the DIMM connector are open.

Orient the DIMM so that the polarization notch lines up with the key in the connector. See Figure C-5.

Carefully insert the DIMM into the connector.

Carefully and firmly press the DIMM into the connector until both latches rotate to the closed position against the DIMM.

To support the VPN module on the Cisco 815 integrated services router, the router must have Cisco advanced IP services IOS software and 128 MB of DRAM installed.

Install the two standoffs on the module, as shown in Figure C-6.

Figure C-6 Installing the Standoffs on the VPN Module 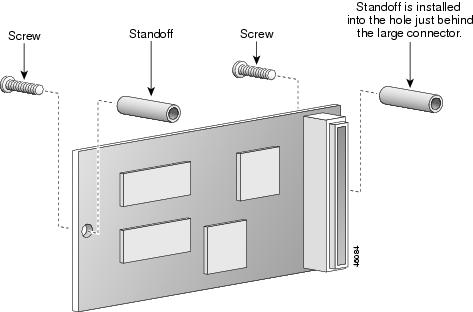 Pushing down as indicated in Figure C-8, plug the VPN module into the slot.

To secure the VPN board connection in the socket, you must attach a retention clip.

The retention clip for the Cisco 815 integrated services router slides over the VPN module where it connects to the socket and clips to the side of the router motherboard. The horizontal tab slides underneath the WIC 0 socket, as shown in Figure C-9. 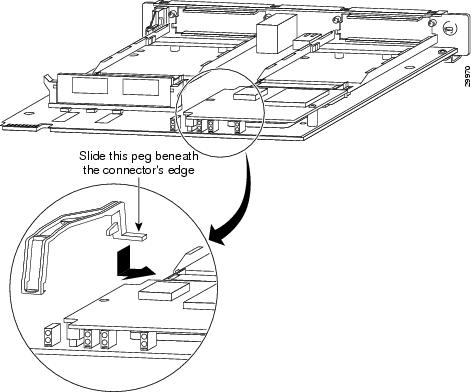 Align the post in the middle of the clip with the hole in the center of the socket side of the VPN card as shown in Figure C-10. Attach the retention clip to the motherboard, as shown in Figure C-11.

Figure C-11 Attaching the Retention Clip to the Motherboard 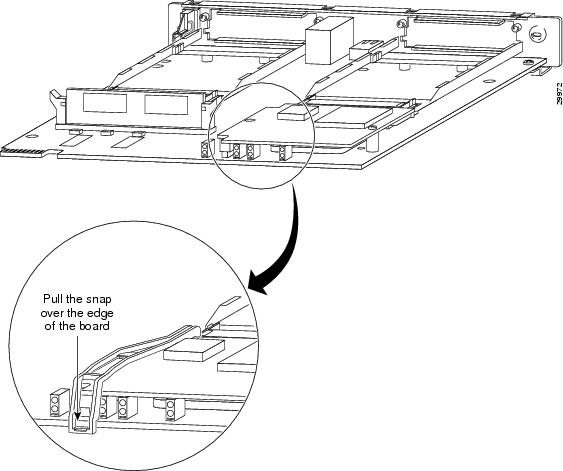 Turn the motherboard over, so that it is resting on its top. Use a Phillips screwdriver to attach the standoffs to the motherboard by using the screws provided, as shown in Figure C-12.

Figure C-12 Securing the Standoff to the Router Motherboard After installing memory or a VPN module on the motherboard, attach the router cover by following these steps:

If you disconnected the fan from the motherboard in the "Opening the Chassis" procedure, reconnect the fan cable to the connector labeled FAN on the motherboard.

Locate the posts that protrude from the inside of the chassis cover, and locate the corresponding openings on the chassis bottom.

Line up the posts with the corresponding openings, as shown in Figure C-8, and carefully slide the posts into the openings, taking care not to damage the router motherboard with the posts. 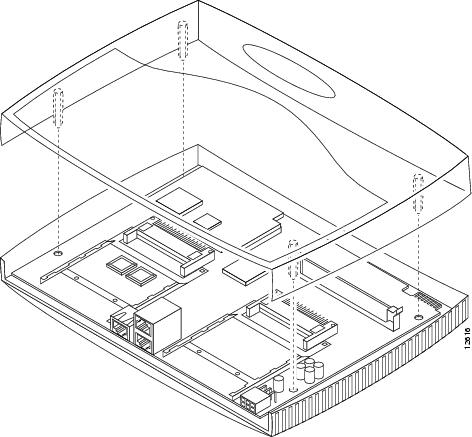 Using a number one Phillips screwdriver, replace the screws that you removed when you opened the chassis. (See Figure C-1.)