The Cisco ONS 15454 leadership in the optical transport market is partly due to its unprecedented aggregation capacity where any type of traffic can be efficiently multiplexed together and transported within the metro network or handed off to DWDM networks for inter-city transport.

Similar to SONET TDM and data services, SDH traffic too is aggregated and transported across an ONS 15454 network. STM-1 to STM-64 payloads are transported over SONET from any port on a Cisco ONS 15454 OC-N card provisioned to support SDH signals.

This application note is applicable to software releases 6.x and later.

All Cisco ONS 15454 optical modules support both SONET and SDH signals. Once a port is provisioned using Provisioning > Port in CTC to support an SDH signal, the cards process the received signal as follows:

At the far end of an SDH tunnel, the reverse process takes place, transitioning the signal from SONET to SDH as follows:

The SDH to SONET mapping depends on the SDH payload type being transported, which the user defines during the creation of the SONET circuits used to transport the SDH traffic. For example, an STM-4 port can be mapped in a number of alternative ways, depending on the content of the signal including:

One STS-12c circuit to transport a 600M concatenated data payload.

Four (4) STS-3c circuits created to transport a sub-structured signal from a STM-4 port to overwrite the pointers of all the incoming AU4s and enable the visibility and access to the sub-structure, when the signal is converted back to SDH at the end optical interface.

The multi-circuit creation capacity of the CTC allows the user to provision several circuits with the same characteristics at one go. CTC automatically duplicates the creation process, applying sequential circuit names and picking available resources to terminate the circuits on the same end interfaces.


Each ONS 15454 optical card can be provisioned to support SDH or SONET traffic on a port-to-port basis. When configured for SDH signal, the ONS 15454 node may be provisioned for line timing from the incoming SDH signal. Additionally, the SDH configured optical modules (except the OC3/STM1 card) can support the ONS 15454 DCC tunneling feature. This is further explained in the "Managing Third-Party Network Equipment" section.

SDH configured ports can be provisioned as part of a 1+1 linear protection group to interconnect with an SDH device. However, interoperability tests with third party SDH equipment must be conducted to completely validate the solution. SNCP and MS-SPRing are not supported on the ONS 15454 SONET platform. Once encapsulated in the SONET payload, the SDH traffic can be transported through any SONET network topology to the other end of the tunnel.

When provisioned to support SDH signal, the ONS 15454 optical modules continue to report alarms and performance measurements (PMs) in the same manner as if they were provisioned for standard SONET transport. This allows an ONS 15454 node supporting SDH transport to report alarms in a consistent manner with the rest of the SONET nodes in the network.

The SDH transport feature of the ONS 15454 addresses a variety of applications, with two applications depicted in Figure 1:

A simple SDH point-to-point transport tunnel, where both terminations have the same bit-rate, is the basic tunneling feature of the ONS 15454. 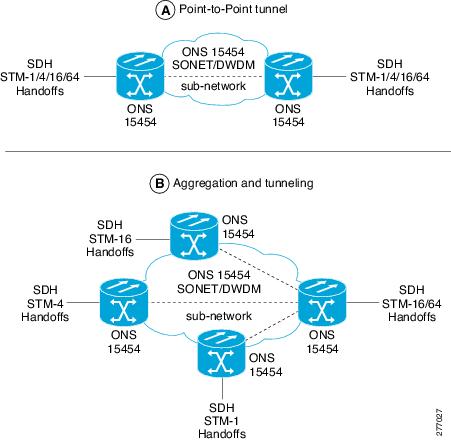 In most carrier applications, transoceanic submarine cables transport SDH traffic. For North American carriers, where SONET infrastructure is the norm for domestic business, the ability to transport these AU4 mapped SDH signals with the same SONET network provides significant economic and competitive advantages. This SDH transport capability enables the service provider to interconnect submarine landing sites to their international traffic dispatching site, which may be located hundreds of miles away from the coast, using a common North American network (see Figure 2). The ONS 15454 allows North American service providers to deliver value-added services and backhaul SDH submarine traffic, leveraging a common next generation SONET infrastructure based on the ONS 15454.

Service providers positioned in SDH markets to deliver STM-1 and higher speed services can benefit from the Cisco ONS 15454. An ONS 15454 based network can be used to deliver high-speed leased line services to customers leveraging its SDH aggregation and tunneling capability. As illustrated in Figure 3, an ONS 15454 network enables service providers to differentiate themselves by offering high-speed native Ethernet connectivity, along with more traditional private line STM-based services. STM-N leased lines can be offered within the metro network as well as between Metro Area Networks (MANs), leveraging the aggregation capability of SDH payloads for long haul transport. 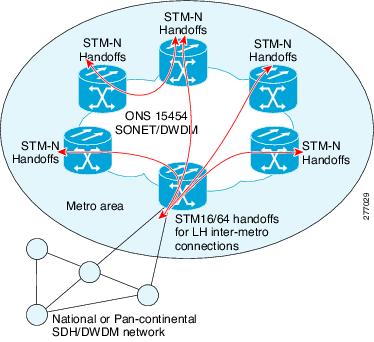 The engineering rules to be followed when deploying SDH over SONET transport capability of the Cisco ONS 15454 are:

When OC-12/STM-4 (IR, 1310 LR and 1550 LR) or OC-48/STM-16 high-speed (IR and LR) port is provisioned to support SDH, alarms at the path level are not supported due to improper B3 byte calculation. The signal degrade alarm at the path level (SD-P) must be disabled on the port to suppress unreliable alarm notifications. Also, the PM data at the path level is not reliable and the associated threshold values must be set to 0 to avoid threshold crossing alerts (TCA) notification on that port.

The ONS 15454 can be deployed for SDH hairpinning appications where both ends of an SDH tunnel terminate on the same network element for all cases as stated in Table 2: 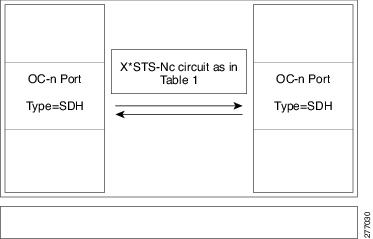 AU3 SDH tunneling is not supported on ONS 15454. The tunneling capacity presented in this application note relates to AU4 SDH multiplexing structure.

You can use the DCC tunneling feature of Cisco ONS 15454 to provide the ability to transparently interconnect third party management channels of the connected SDH networks.

The DCC tunnels from third party SDH devices pass through ONS 15454 nodes without the need for understanding the DCC message content. This is possible because the SONET protocol provides four data communication channels (DCCs) for network element operations, administration, maintenance, and provisioning (OAM&P). One data channel is in the SONET section overhead layer (D1-D3 bytes) and three data channels are in the SONET line overhead layer (D4-D12 bytes). The ONS 15454 system allows you to leverage the line overhead to transport the Section DCC (SDCC) overhead of the third-party.

The ONS 15454 system supports DCC tunnels on all optical cards (except the OC-3/STM-1 card). Each optical card can support the primary SDCC and up to three DCC tunnels through Tunnel #1, Tunnel #2, and Tunnel #3. The DCC tunnels that can be created are listed in Table 3:


Various types of connections can be configured that includes SDCC to tunnels, SDCC to SDCC, tunnel to tunnel, and tunnel to SDCC. The following guidelines apply when DCC tunnels are created:

All DCC tunnel connections are bidirectional

CTC on a SONET node does not allow an SDH node to be added to it (or vice versa). So, an end-to-end circuit provisioning is not possible. The SONET and SDH nodes must be configured separately.

Any Ethernet card that supports STS-3c or multiples of STS-3c circuit type can be provisioned as explained in this section. Data traffic similar to Ethernet traffic can also be provisioned if the front port (Eth, Gigi, and FC) of the IO cards (CE-1000,CE-MR,and FC-MR) process the frames.

The following steps provide a configuration overview to connect a SONET node to an SDH node.

To connect a SONET node to an SDH node, ensure:

Both ends of the fiber connections are of the same matching rate. For example, if a SONET node has OC-48 port, then the peer SDH port must be STM-16.

Port in the SONET node must be configured as TYPE = SDH (go to CTC > Card > Line tab. Select SONET node and select Type as SDH).

In the SONET node, configure an STS-Mc circuit between the traffic terminating port (such as a port in CE-MR) and OC-N port (converted into TYPE = SDH in Step 1).

Refer Table 1, for the equivalent circuits.

For V-CAT and LCAS circuits, each member circuit size needs to be STS-3c-nv, where n is 1 to 7. For details on the CE-MR-10 card and member circuits, refer to Chapter 5, Ethernet Cards of the Cisco ONS 15454 Reference Manual.

The following example describes how to configure the Ether traffic flow from a SONET node to an SDH node. An STS-3c circuit is used in the example.

Configure circuits as shown in Figure 5 using the steps in the "Configuring Cisco ONS 15454 to Carry Ether traffic Through SONET and SDH Network" section. This carries traffic from a CE-MR-10 card in SONET node (Node A) to the CE-MR-10 card in the SDH node (Node B).

The SDH tunneling feature leverages a single SONET network to support traditional TDM services, as well as next generation data and SDH private line services. This single network capability decreases the time-to-market demands for SDH services, thereby eliminating the need for an overlay network. The ONS 15454 further extends its multiservice capabilities by supporting SDH transport over all optical interface speeds, from STM1 to STM64. In addition, the DCC tunneling capability further enables a differentiated service offering, by providing an end-to-end management visibility option when transporting the SDH service for their customers.

The ONS 15454 metro optical transport platform provides the tools necessary to enable a service provider to deliver cost-effective solutions to their markets.