Node names collected from the network often have long suffixes that are the same for all nodes. The Rename Nodes tool removes suffixes from node names, making them easier to read in the plot and tables.

Although nodes do not have to be contained in sites, adding them to sites can simplify and improve the visualization of the network. To reorganize your network by changing the node-to-site mappings, choose Initializers > Assign Sites to Nodes. For example, you would typically place all nodes in the same geographic location or point-of-presence (PoP) into a single site. You have two options:

The following figure shows a network plot before and after assigning sites to nodes. Before, there were 19 sites; after, there were 13. Notice the new site names that were generated.

Figure 1. Example Before and After Assigning Sites to Nodes 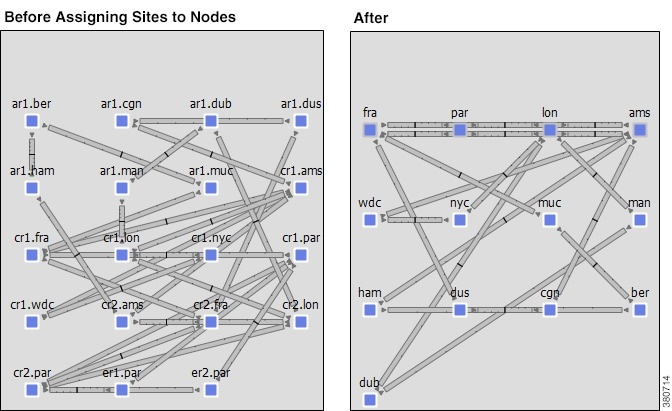 The Assign Sites to Nodes tool assigns sites as follows:

To create temporary node-to-site mappings that are not stored in the plan file, click the Use simple mapping rule radio button in the Assign Sites to Nodes dialog box. The mapping is created using two fields: Node name delimiter(s) and Site name.

To create a Node-to-Site Mapping <NodeSiteMappingRules> table in the plan file, particularly for use by the template, click the Use # rules in Node-to-Site Mapping Table radio button in the Assign Sites to Nodes dialog box. An attempt is made to match the node name to expressions in the Node Matches column. If a match is found, the node is assigned to the site as defined by the corresponding Site Expression. The following graphical example matches cr1.lax into lax-core and er1.lax into lax-edge:

The order in which these matches are attempted is defined by the Order column.

You can arrange sites and nodes using the following methods:

WAE Design includes a database of worldwide city names and airport codes that identify the longitude and latitude of major cities. Using the Initializers > Assign Locations to Sites tool that accesses this database lets you quickly lay out sites within a network with geographic precision.

You can quickly assign multiple sites to these locations following these steps. Changing the geographic location of a site does not change the location of its children sites.

As an alternative to using the Assign Locations to Sites initializer, you can set a location from the Properties dialog box. (For best results, use airport codes.) 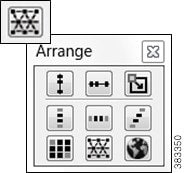 Large, complex networks often contain a limited number of core sites that form the network backbone, with many edge sites that connect locally to one or more of the core sites.

The Arrange palette has special features for arranging edge sites. To access this palette, right-click in an empty area and choose Arrange.

The following figure shows an example network with edge sites that have been arranged to separate them from the core. Both sites on the left are in the same edge group because they each have two connections to the same two core sites. The site at the top of the diagram is in a separate edge group because it has different connections to the core sites. Edge sites can have a more complex topology, because they can also connect to a core site through another edge site. 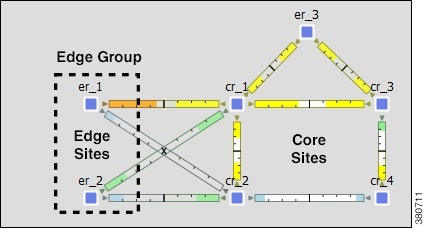 Define Nodes as Edge or Core

Follow these steps to define nodes as core or edge. By default, all nodes are core nodes.

Show and Hide Nodes or Sites

By default, nodes and sites are visible in the network plot. You can hide nodes and sites and their connecting circuits on a per-layout basis, though they still exist in the plan file and tables.

Hiding a site also hides all of its contained objects.

By default, site and node names appear above the object; you can change this positioning. Also, rather than showing the site names, you can set a different display name that can be internationalized. The following figure shows an example of changing both for a site.

Figure 3. Example of Changing the Site Display Name and Position

You can change how circuits are displayed by clicking the Plot Options icon in the Visualization toolbar. Alternatively, choose Edit > Plot > Plot Options > Edit Options.

The Design Circuits tab has the following options:

The Other tab lets you toggle on or off the following settings:

By default, WAE Design displays all circuits individually. For example, if you have parallel site circuits, they are displayed in a stacked manner. 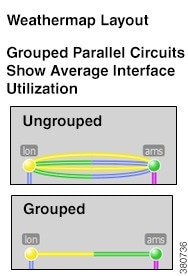 By default, two interfaces are represented in the plot as two sides of a full-length circuit drawn from one site to another. However, circuits connected to internal or external ASes are shortened.

This full-length model works well when the sites are close together, but if they are far apart full-length circuits can clutter the plot. You might want to display the sites as regions by shortening circuits between them. 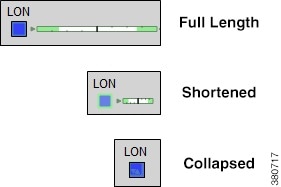 Follow these steps to move and curve the circuits in a Weathermap layout. 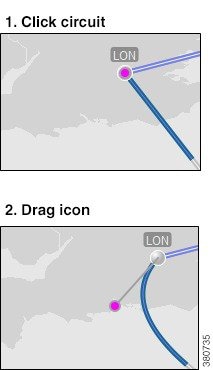 One way to simplify a Weathermap layout is to reset the circuits’ curves. Doing so changes the curves so they are more similar to ones that exist, and removes circuit overlap. 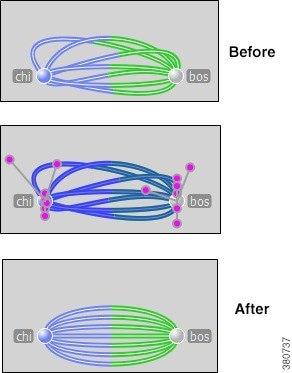 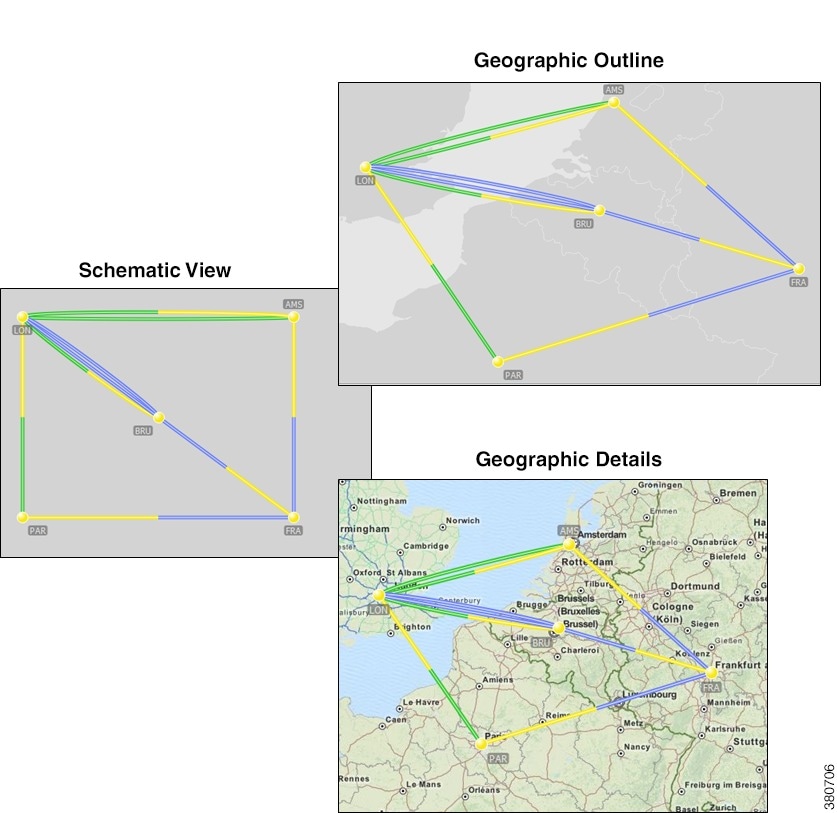 You can use a static .png image as a background.

Interfaces have both measured and simulated traffic (in Mbps). This traffic appears on the interfaces as color fills that represent the percentage of outbound traffic in comparison to its capacity. The default colors for these representations appear in the Utilization Color menu, which is a set of color-coded drop-down lists in the Visualization toolbar. There are six default colors representing thresholds from 0% to 100%. 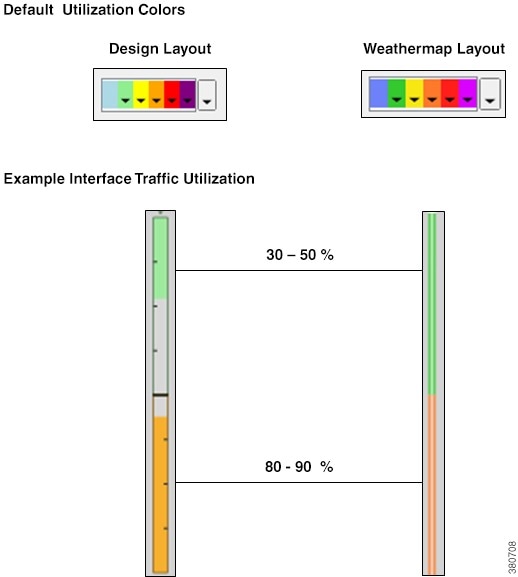 Note that in the L1 view, only the Failure Impact view shows colors, and those colors are related to L3 interface utilization.

Each default utilization color has a menu whose numbers correspond with their values in the Design Colors tab of the Plot Options dialog box. It is from this Edit Colors dialog box that you edit the colors used for traffic utilization.

You can edit the utilization values, add and remove colors, and locate interfaces that meet utilizations levels of special concern. Edits to these colors are saved to the plan file when the file is saved. You can also create and save a set of user defaults that can be applied to other plan files. Different utilization colors can be set for different layouts in a plan.

After a utilization color is added, it appears in the Utilization Color menu.

Although you can delete a default color so that it is not represented on the plot, doing so does not remove that color from the Utilization Color menu. Deleting a color that you previously added, however, removes it from the toolbar.

Each time you modify one or more plot options, they are saved in the plan file for the current layout. When you save the file, these plot options are saved per layout.

There are two types of plot option defaults: