WiMAX is a standards-based wireless technology that offers high throughput broadband connections over long distances. WiMAX can be used for a number of applications, including "last mile" broadband connections, fixed and mobile cellular service, hotspots and cellular backhaul, and high-speed enterprise connectivity for business. WiMAX is based on the IEEE 802.16d standard for fixed wireless, and the 802.16e standard for mobile wireless. This standard is appealing to customers because it allows mass production of chipsets that reduce CPE costs, ensures multi-vendor interoperability, and reduces investment risk for operators.

The architectural framework of a WiMAX network consists of the Access Service Network (ASN), the Connectivity Service Network (CSN), and a AAA Server. An Access Service Network is a set of network functions that provide radio access to a WiMAX subscriber. The ASN typically provides functions such as network discovery and selection, connectivity service between the MSS and CSN, Radio Resource Management, Multicast and Broadcast Control, Intra-ASN mobility, Paging, and Location Management. The WiMAX architecture consists of both mobile and fixed subscribers, as well as the ASN and CSN.

The Visited CSN plays the role of a AAA proxy. During all AAA interaction the VCSN AAA server acts as a RADIUS proxy transporting RADIUS packets between the ASN and the HCSN. 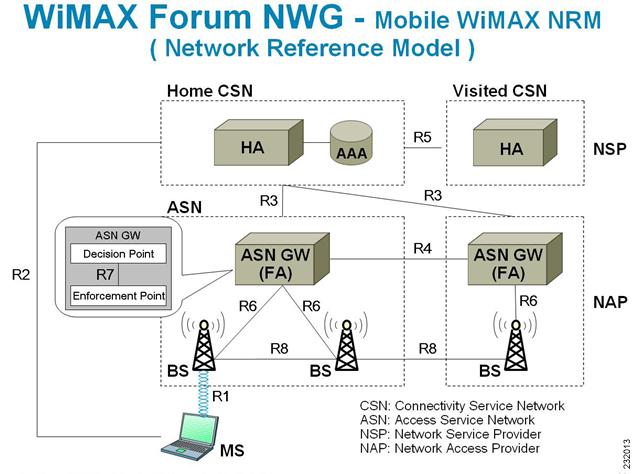 Cisco Prime AR uses the Extensible Authentication Protocol (EAP) to enable the WiMAX feature. It also caches the IP attributes and Mobility Keys that are generated during network access authentication. To enable caching of the WiMAX attributes, you must configure the respective resource managers. See Configuring the Resource Manager for WiMAX, for information on configuring resource manager. Figure 10-2 shows the WiMAX workflow in Cisco Prime AR.

Direct interaction between the ASN GW and Cisco Prime AR

The authentication methods followed by Cisco Prime AR are:

Prepaid attributes can also be sent in the initial authentication.

The attributes contained in this flow are listed in Table 10-1. For detailed information on the attributes refer to the WiMAX forum NWG_R1_V1.3.1-Stage-3 specifications document.

A policy engine can parse the NAI decoration and conclude the type of authentication method for the incoming access-request for passing on to WiMAX service.

the WiMAX mobility attribute is present

the NAS-Port-Type attribute is absent

Cisco Prime AR checks for a valid session in the session cache based on NAI and sends an Access-Accept to the HA.

Cisco Prime AR responds with the correct keys back to the HA based on the NAI in User-Name attribute. Cisco Prime AR returns an Access-Reject if it does not find a valid session for the NAI during the user authentication and authorization or if there are other errors.

Cisco Prime AR supports prepaid and hot-lining flows for WiMAX. These are supported by the existing mechanisms.

A new service type named wimax will be used for the WiMAX feature in Cisco Prime AR. aregcmd command is used to configure WiMAX in Cisco Prime AR. WiMAX service contains—Session Manager (with a session-cache resource manager and HA resource manager), Query Service that is connected to the session manager configured for this service, and Prepaid Service, which are required to connect all the flows appearing in Cisco Prime AR for WiMAX. This service will be used as a container for the new key generation modules and the existing modules such as EAP services.

Configuring the Resource Manager for WiMAX

Configuring the Session Manager for WiMAX

Configuring the Query Service for WiMAX

Configuring the Resource Manager for WiMAX

You must configure the following two Resource Managers:

The HA Resource Manager must contain the IP ranges covering all the HA IP addresses that are to be assigned in round-robin. You must configure the HA Cache Resource Manager to cache the mobility keys (Table 10-3).

The following shows the sample configuration for HA:

The following shows the sample configuration for HA Cache in HAAA:

The following shows the sample configuration for HA Cache in VAAA:

When the OverwriteAttributes value is set as TRUE, the newly generated mobility keys will be cached with the session record. By default, the value is FALSE.

The HA-RK-Lifetime attribute type must be of type STRING instead of UINT32 under /Radius//advanced/attribute\ dictionary/vendor-Specific/vendors/wimAX/subAttribute\ Dictionary.

Configuring the Session Manager for WiMAX

Configuring the Query Service for WiMAX

When you configure a query service for the WiMAX service in Cisco Prime AR, you must refer it to the WiMAX Session Manager that you created. While configuring WiMAX, you must refer the WiMAX-Query-Service parameter to a valid Query Service.

You must configure the Query key as the User-Name attribute, which contains the NAI. You must also configure the query service to return all the relevant mobility keys as described in Table 10-5.


The following shows a sample configuration for a WiMAX Query Service:

If AttributesToBeReturned is not configured, all the cached attributes will be returned.

When you configure the WiMAX service under /Radius/Services, you must set its type to wimax and provide the following configuration options:

The syntax to generate the a WiMAX request from radclient is

The BEK key derived from EMSK is calculated as follows:

When Cisco Prime AR receives the accounting start packet for the unprovisioned device,

IP, MAC address, and BEK of the unprovisioned device notifies the OMA-DM server to initiate the provisioning.

The communication between Cisco Prime AR and OMA-DM/Portal server is through web-service by using SOAP over HTTPS. It is assumed that the OMA-DM server (or a mediation function) will have a web-service using which AR can communicate.

Configure a script object, such as wimax-provision.

The file libProvisioning.so is come up with Cisco Prime AR kit. You have to copy it into /cisco-ar/scripts/radius/rex path. Entrypoint ProvisionedDeviceLookup literally looks up a datastore to check if the user is provisioned. InitEntryPoint 'InitializeProvisioning' takes care of all initialization work for entry point. InitEntryPointArgs 'ldap-wimax' says the user look up to be performed against ldap datasotre. Oracle datastore can also be used wherein you have to give this property to 'oracle:wimax'.

Entry point should be set to WebServiceCall.

Cisco Prime AR provides support for Intercept Access Point (IAP) for receiving the intercept/monitoring request for the subscriber whose "Access Associated" Communications Identifying Information (AA CmII) is to be intercepted and delivered to a Law Interception Server (LIS).

LinkUpdate - To query the target user in monitored list

ListTarget - To list all the users that are currently being monitored

When the "ProvisionTarget" request is received from LIS, Cisco Prime AR adds the respective user in monitoring list and starts monitoring the user events.

Table 10-7 lists the events of the target user that are reported to LIS:

On receiving the DeprovisionTarget request from LIS, the target user is removed from the monitoring list.

On receiving the LinkUpdate request on target user from LIS, the target user details are checked in the monitoring list and message is sent to LIS as listed below:

If the specified user is not currently being monitored, a reply with reason-code indicating that the user is currently not targeted is sent.

If the specified user is currently being targeted and is not logged into the network, a reply with status stating that the user is "inactive" in the network is sent.

If the specified user is currently being targeted and is logged into the network, a reply with the following attributes is sent:

On receiving the ListTarget request from LIS, a list of users that are currently being monitored are sent to LIS. The reply will contain a surveillance-target-count attribute indicating the count of the number of users being targeted and multiple instances of surveillance-target-identifier attribute having the real identifiers.

Each request from the LIS contains a transaction-id which is copied on to the reply from Cisco Prime AR. For each request type there is an appropriate response type with appropriate return data. They are as follows:

RexLiScript is configured in Virtual-Server-Outgoing-Script that sends events of the provisioned users to the LI service client.

Create the RexLiScript script object that will be set in Virtual-Server-Outgoing-Script point.

The file 'libLiScript.so' comes up with Cisco Prime AR kit. You have to copy it into /cisco-ar/scripts/radius/rex/ path.